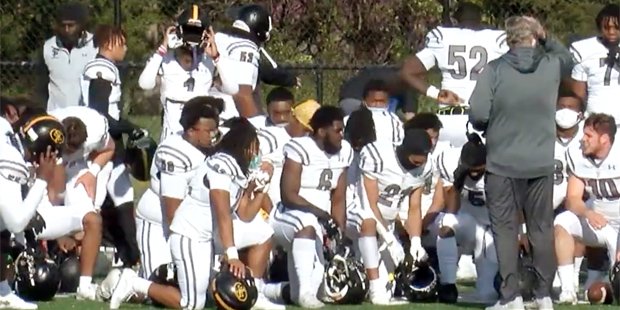 The St. Frances Academy football team, which has established itself as a Top 10 national power over the past five seasons, returned to the football field for the first time since the fall of 2019, Friday night in Olney, MD, as the Panthers went on the road to face Our Lady of Good Counsel.

The contest was a rare matchup for St. Frances against an opponent from within the DMV region and, as it turned out, an even rarer loss, as the host Falcons of the Washington Catholic Athletic Conference (WCAC) delivered a 27-14 blow to the Panthers.

St. Frances had a promising start on the game’s opening drive, as it marched across midfield, fueled by several strong runs by Panther running back Joseph Bray. The Good Counsel defense, however, forced a turnover, recovering a fumble at the Panther 49. The ensuing possession did not lead to points, but it did result in a punt that pinned St. Frances inside its own 5-yard line.

Playing the field possession game, Good Counsel got the ball back at the St. Frances 47.

On the first play, OLMC’s LeJay Hatcher broke off a 19-yard run. That was followed by a by a 20-yard completion from Falcon freshman quarterback Frankie Weaver to Joe Comello, setting up a first-and-goal at the Panther eight. Two plays later, Weaver found Shane Carroll for a 5-yard touchdown pass, giving Good Counsel an early 7-0 lead.

Good Counsel returned to the St. Frances red zone early in the second quarter and the Panthers appeared to get a fourth down stop at their own one. However, a pass interference call gave Good Counsel another set of downs and Weaver cashed in with a 1-yard sneak into the end zone, stretching the Falcons lead to 14-0.

St. Frances, which only had 12 practices leading up to the contest, had several promising drives hampered by penalties, but the Panthers finally got on the scoreboard with 10 seconds to play in the first half when quarterback John Griffith rolled to his right and delivered a perfect throw to the right corner of the end zone, which was hauled in for a touchdown by Andrew Jacobs. The extra-point kick was missed but the Panthers went to the half down only 14-6.

The St. Frances defense got the Panthers even in the third quarter when Deonte Malone came up with an interception and returned it 20 yards for a pick six. SFA added the two-point conversion on a run by Bray to tie the contest at 14-14.

Later in the third quarter, Good Counsel regained the lead with a 32-yard TD run by Connor Rose, setup by a St. Frances personal foul on fourth down which prevented the Panthers from getting the ball back on a punt. From that point St. Frances continue to hurt its chances with penalties and another big fumble that led to a 30-yard field goal by OLGC’s John Reyes, early in the fourth quarter to grow the Falcons’ lead to 24-14. Five minutes later, Reyes added a second field goal, this time from 25 yards, to set the final score.

Good Counsel finished its abbreviated spring season at 2-2. St. Frances has no other games scheduled this spring.