Moments before the start of the award ceremonies for Saturday’s Class 3A state boys soccer championship game, Ousman Touray wasn’t sure where to stand in the medal receiving line with his Wilde Lake High teammates.

There’s no doubt of his place in Wilde Lake soccer history. Touray’s goal in the 82nd minute lifted the seventh-ranked Wildecats to a 1-0 victory over No. 5 C. Milton Wright at Loyola University’s Ridley Athletic Center.

Touray, a 6-foot-2 gazelle got a couple of steps ahead of C. Milton Wright’s defense to get Grant Gladden’s through pass and tapped the ball past goalie Zach Hetrick, setting off a shirtless celebration run by the junior forward.

It was a fitting end of a sensational breakout season for Touray, whose two-goal explosion in the final 15 minutes rallied the Wildecats (15-3-1 overall) past Howard County rival Mount Hebron in the state semifinals last weekend at Frederick County’s Linganore.

Though C. Milton Wright (14-5-1) methodically kept Touray and sophomore teammate Joebel Gray from making runs to the goal, Wilde Lake coach Trevor Shea knew it was a matter of time.

“It was meant to be,” said Shea. “When we come up that lucky in overtime…I felt like that the whole season. We knew that we were destined to be in this spot.”

The Wildecats were among the upper echoleon in the deep and talented Howard County League this season. Wilde Lake defeated River Hill, which was No. 1 in VSN’s Top 20 during the regular season the previous HoCo program (2015) to win a state championship.

Looking for a third straight 3A title, C. Milton Wright was left heartbroken. The Mustangs controlled the final 70 minutes of regulation, but didn’t score.

“I thought we did enough creating chances, creating quality chances,” said C. Milton Wright coach Brian Tully, “but I think we left a couple out there that we normally find the back of the net.”

“We came into the game expecting to win,” said Mustangs senior midfielder Ethan Dolezal. “It just wasn’t our day.” 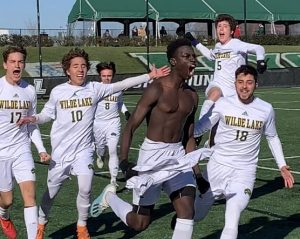 A shirtless Ousman Touray celebrates his winning goal as his Wilde Lake teammates chase him. The junior scored with 7 minutes, 38 seconds left in overtime, lifting the Wildecats to their first state championship since 1997.

The win was the completion of several years of foundation building by Shea, whose father Don, is a state soccer coaching legend. Trevor won three titles as a player under his father at Oakland Mills 20 years ago.

“It’s unbelievable, but I think we’ve been putting all these puzzle pieces together for the last four years since we started and we knew that we could do it, and it’s pretty impressive that we were able to make it happen,” Trevor Shea said.