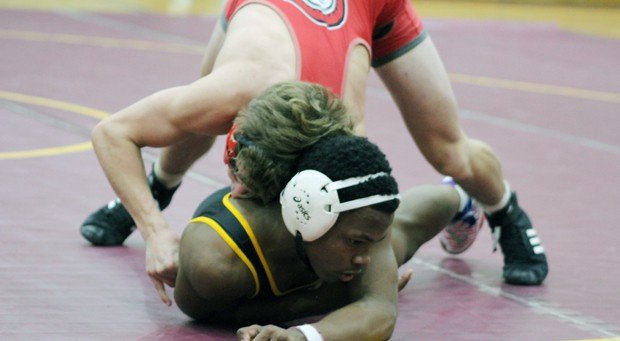 Glenelg’s wrestling team found itself ranked No. 4 in the state of Maryland by BillyB’s Wrestling World following a holiday win over Damascus at the Damascus Holiday Tournament. Dunbar came in at No. 16 after sweeping the field to win the Westminster Duals.

This set the stage on Thursday evening for quite a showdown at Dunbar High School. Unfortunately for the Poets, they seemed to still be on the holiday break, looking sluggish, while visiting Glenelg looked sharp and focused in prevailing 43-18.

“We knew those swing matches were probably gonna be close,” said Glenelg coach Matt Bichner. “We didn’t know much about their lighter guys, but they have some athletic kids that are pretty tough. Our lightweights are good. They just haven’t been wrestling very long so there’s always a chance they get caught in something, so I was a little nervous with them going out there.”

Dunbar’s Camerin Deville (left) and Glenelg’s Tino Campanile take measure of each during their 120lbs match won by Campanile, 3-2.

The match started at 106 and the two squads traded wins at the first two weights. Tino Campanile stepped on the mat unranked at 120 and squared off with Dunbar’s No. 9 Camerin Deville. Campanile’s shocking, 3-2, upset, set the tone for the Gladiators and energized their squad.

“I go into every match thinking the same thing, go in, get out, and wrestle my hardest, and don’t get pinned,” Campanile said. “It’s basically my mindset going into every match. I just knew I couldn’t give away any bonus points and I just had to come up big and make something happen. I felt pretty good. It always feels good to get a win coming off the mat.”

Kevin Hansberger (No. 8 at 132) followed that up with a pin of Steven Luedtke to extend Glenelg’s lead to nine, 12-3.

Darrion Carr got the Poets back in the win column at 132 with a 10-4 decision of Reed Kraemer. This setup the marquee bout of the match, which was also a repeat of last year’s 2A/1A state final.

No. 3 Jared Thomas won that meeting 8-7 over Dunbar’s Jalen Jones. This match, however, proved to all one-sided, all in Thomas’ favor as he registered a major-decision, 9-0.

“I think my (state) finals match (there) was a little bit more nerves,” said Thomas. “This time, there wasn’t as much on the line. So, it was a lot easier to just go out and let it fly and wrestle the way I can. I think he did the same. I thought at the end of last year’s finals match I was definitely the better wrestler, but this time it showed a little more.

“It was a big team dual for us to come up here. It’s an out of county team dual and they might be one that we could see in the state duals. So, it’s a big deal to get in their head now. If we do get them later on we’re in their head already.”

Trey Fleece added another win to Glenelg’s ledger with a 3-1 win over Dominic Bullock. De’Airus Carr (No. 7 at 145) picked up a fall for Dunbar at the 1:29 mark of the first period to pull the Poets within seven, 19-12.

As was the case on the day, Dunbar was not able to build on that momentum as Glenelg won the next match at 160 when No. 3 Jacob Jones pinned Valentino Pryor, 2:31.

The Gladiators, though, did build on that and won the next three bouts to put the match away. No. 12 Drew Sotka edged Dunbar’s unranked Nyck Simpson, 5-4 at 170. Jake Arnone (182) added a 7-4 win over Patrick Ford. State runner-up, No. 3 Sam Alsheimer, made quick work of Dayvon Davis with a 22 second fall.

No. 21 Massimo Conti received a forfeit at 220 for the Gladiator’s final points. Dunbar’s heavyweight, No. 1 Jorden Pryor (VSN’s Upperweight Wrestler of the Year last year) collected his own forfeit to end the match, 43-18.

“David (Ridenour) winning that close match at 106,” Bichner added. “Andres (Lopez Campos) had that match and let up in the last ten seconds. But them not giving up bonus points and splitting that was good. Then Tino (Campanille) coming out and beating (Camerin) Deville was huge. That kinda made up for some of the points we lost in those first two matches. That really just set the whole tone for the dual, Tino getting that big win.

“The lightweights are kind of our inexperienced guys. Sometimes we get down in duals early. Then from 60-220 we’re real confident with those guys and they’ve been doing it for a long time. So we knew if we got there, we were close, we’d be in good position. I know (Sam) Alsheimer, Jacob (Jones), Drew (Sotka), (Jake) Arnone, and Massimo (Conti), those guys were gonna get it done. They just did what they’ve been doing all year.”

Pictured above: Glenelg’s Jared Thomas works from the top during his 9-0 major decision over Dunbar’s Jalen Jones in a rematch of last year’s 2A/1A state final, which Thomas also won, but by only one point, 8-7.