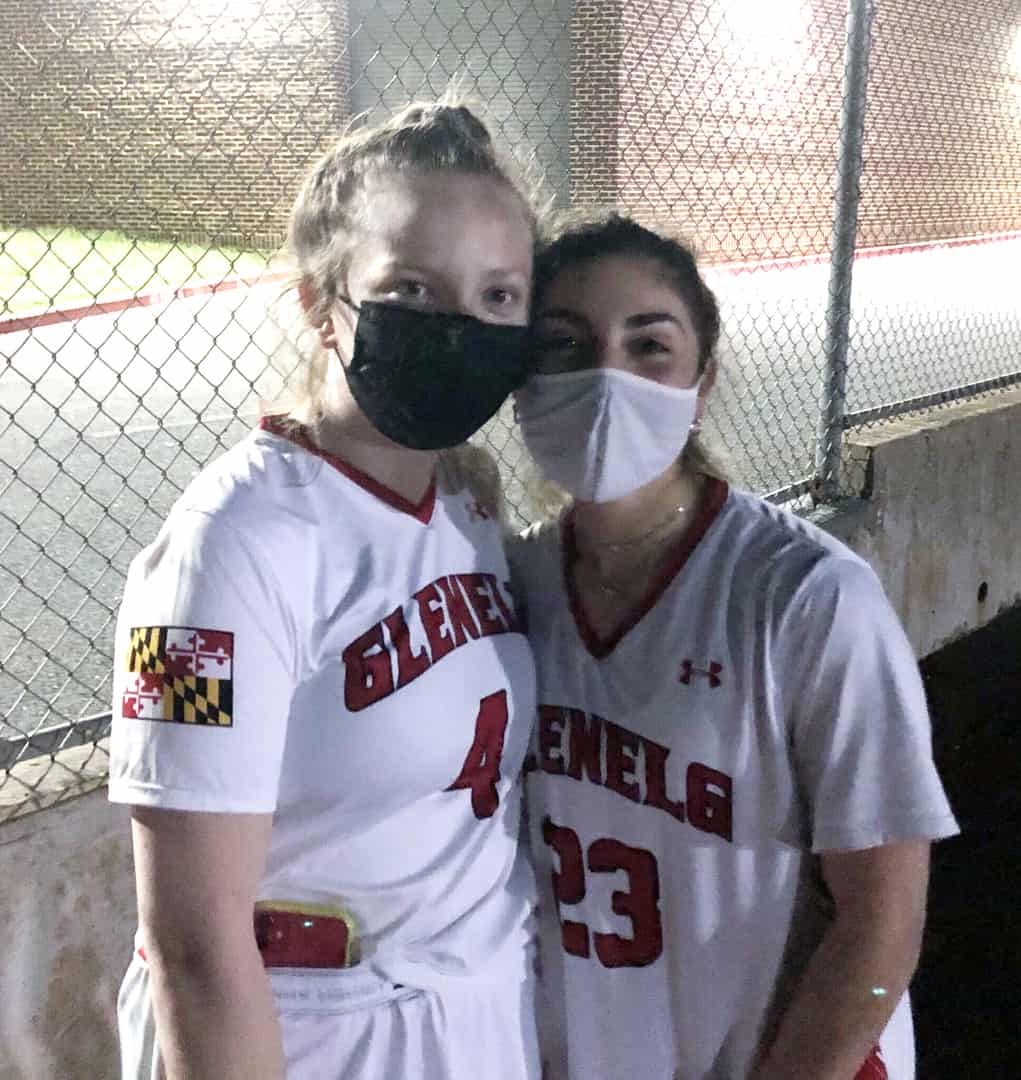 Rachel Barker and Hala Silverstein were clutch in goal for Glenelg field hockey Monday evening. The duo combined for 19 saves as the Gladiators handed River Hill its first loss in a Howard County contest.

As Glenelg High field hockey players streamed onto the field Monday evening, a sense of relief could be felt.

The Gladiators had just held on to a one-goal lead against River Hill for the entire fourth quarter, surviving breakaways and corner chances aplenty in the final minutes.

They had seen a game similar to this earlier in the season against the Hawks, and it slipped away. It didn’t happen this time, however.

Glenelg held on for a 2-1 win over River Hill, marking the Hawks’ first loss of the season. The Gladiators (5-2) sit one game behind River Hill (6-1) in the Howard County league  with three games left.

Glenelg coach Nikki Trunzo knew how big of a win it was for her team.

“We had those two losses (against River Hill and an overtime loss to Marriotts Ridge), hopefully it can carry us into the rest of our season,” Trunzo said. “However, we do play really strong teams.”

Both teams were held scoreless throughout most of the first half, until Sarah Kang scored the opening goal for Glenelg with two-and-a-half minutes to go in the half. Ashley Kim added another with about five minutes left in the third.

River Hill got a goal back with about three minutes left. It came off a corner and Madeline Vasillos was the one who scored it.

Despite losing its undefeated season, River Hill and its coach Shelly Chamness was pleased with the performance.

“We played awesome hockey,” Chamness said. “I think we played well enough to win, and we just didn’t, and that just happens sometimes.”

River Hill had chances all game, and it was either pushed out by the Glenelg defense or saved by the Gladiator’s goalkeepers, Rachel Barker and Hala Silverstein.

Whether it was breakaways or corners, Barker and Silverstein made sure they had their defense lined up.

“We always make sure we communicate with them (our defenders) so we never have a breakaway,” Barker said. “We always made sure we had them covered.”

Barker and Silverstein were both quick to credit their defenders when talking about their successful night in goal.

Caitlyn Baehr typically plays center midfield, however, Trunzo moved her to center back.  She has quickly adjusted into a new role, and has been a versatile piece to the Gladiators.

“Caitlyn has stepped up so much this season,” Silverstein said. “She’s versatile and she saves us all the time. She’s great.”

Baehr had not played defense before this season, and her quick adjustment to the role has not gone unnoticed, Trunzo was quick to point out.

“She played the strongest, simplest game of field hockey,” Trunzo said. “She was major for us.”

“We had open shots,” Chamness said. “Sometimes it’s not in your favor.”

The Hawks remain a game above the Gladiators in the standings, and Chamness is not going to take many negatives away from the loss.

“Moving forward, I don’t have a lot of corrections from today,” she said. “I think we played a great game today.”