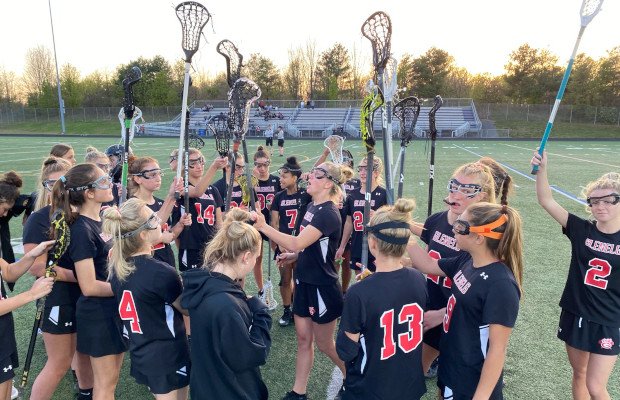 Glenelg senior Maura Murphy secured the draw, weaved her way through the Marriotts Ridge defense and fired the ball into the back of the net just past the midway point of the first half Wednesday. 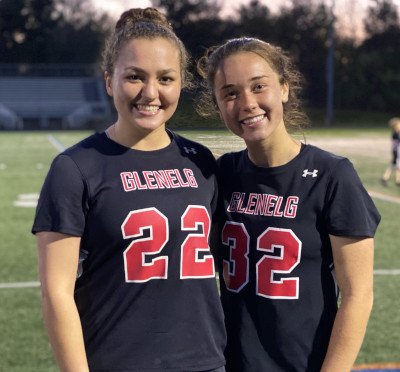 Glenelg goalie Jocelyn Torres (left), who made nine saves, and midfielder Maura Murphy, who had six goals and two assists, smile after the Gladiators 17-4 victory over No. 12 Marriotts Ridge.

It was just one play, spanning 11 seconds, but it ended up being a microcosm of an all-around dominant effort by both the Gladiators and Murphy in a 17-4 road win over the Mustangs.

Murphy scored six goals to go along with two assists, while also serving as the catalyst to help Glenelg (9-0 overall, 4-0 Howard County) secure 17 of 22 draws, in a battle between a pair of powerhouse Howard County programs that came into the match-up undefeated in league play.

Afterward, Murphy said that the key to the effort was preparation — work that began months ago.

“Knowing that I do have a big responsibility on that circle … there was a lot of running and conditioning drills before the season,” said Murphy, who has taken over nearly all the draw responsibilities this spring due to teammate Isa Torres being sidelined with shin splints. “Being a captain this year, I knew I had to be ready to lead the team on and off the field. But it’s not just me, I think all of us have been motivated after falling short with our loss last year in the playoffs.”

While Murphy and the offense stood out from beginning to end against the Mustangs, so did the Gladiators’ defense. Led by goalie Jocelyn Torres, who finished with nine saves, Glenelg held Marriotts Ridge (5-4, 4-1 Howard) to its lowest offensive output of the season.

“We don’t get as many chances to make plays [on defense] because our team is so good at controlling possession, but we just make sure we are always ready when the time comes,” Jocelyn Torres said. “Honestly, it almost allows us to give it our all every time and play that much harder because we know we are going to have breaks.”

Torres and the defense didn’t see much action in the first 20 minutes, as Glenelg built a 7-0 lead. Lauren Lapointe (three goals) kicked off the scoring with 21:17 left in the first half and then Murphy and Emma Kennedy (4 goals, 2 assists) got going as well to open up the quick cushion.

When the Mustangs did get possession, space was hard to come by and it was difficult to establish any rhythm.

“Those first 15 minutes of the game we only had the ball a few times and only got maybe one or two shots. That’s what makes the draw so important. Naturally, if you don’t have the ball you can’t score,” Marriotts Ridge coach Amanda Brady said. “Then when we did get those couple shots, Jocelyn is a great goalkeeper who came up with some great saves.”

Marriotts Ridge finally got on the board with 5:06 remaining before halftime, as Maisy Clevenger found Esther Yang in the circle for a score. Yang added another goal before halftime, but the Glenelg lead was still 9-2 at the break.

Three quick Gladiator goals after intermission extended the lead to double digits and Marriotts Ridge never got closer than nine the rest of the way.

Glenelg coach Alex Pagnotta said that this year’s group is a good bit ahead of where last year’s team — which beat Marriotts Ridge 18-6 during the regular season — was at this same point.

“Last year, being the COVID season and not really knowing what was going on, we approached things differently and slow rolled putting things in. But these girls came out working super hard from Day 1 this spring,” Pagnotta said. “We have put a lot of different things in right away and we have a lot of different options, whether it’s on our clear or on our ride. We are extremely versatile on both offense and on defense.”

Glenelg showcased its balance in the second half on its way to establishing a running clock. The Gladiators had six different players score after intermission.

Jocelyn Torres said that the win carried a little extra meaning because of the rivalry between the two programs.

“This means a lot to us. In past years, we have been neck and neck. We have lost games against them and won others,” she said. “So to come out, knowing they have a strong team, and create a running clock … that was a big goal for us.”

On the other side, Brady said that — similar to last season — the key for the Mustangs will be how it responds moving forward. Following the loss to Glenelg last spring, Marriotts Ridge rolled off five straight victories on the way to capturing the 2A state championship.

“We have to remember that this is only one game and, right now, tomorrow is a new day and we have to be ready to move on,” Brady said. “We’ve got the second half of the season and that is what we have to focus on. Obviously, we can learn a lot and I will also say that I was encouraged by how we continued to hustle and play hard until the end. That was important.”