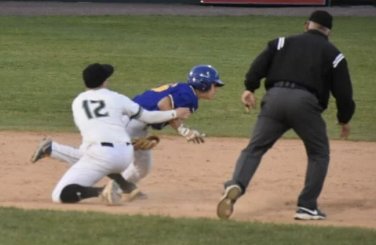 Patuxent second basemen Ryan Moran (12) tags out Liberty’s Spencer Trump for a double play in the third inning of Wednesday’s Class 2A state baseball semifinals. Missed opportunies early cost the No. 11 Lions, who fell 3-1 to undefeated Patuxent at Regency Stadium in Waldorf.

As Spenser Flavin strode to the mound with two outs in the bottom of the seventh inning of Wednesday’s Class 2A state baseball semifinal, the Glenelg High senior pitcher didn’t have an ounce of worry.

The Gladiators were locked in a 3-3 tie with North East, with a spot in the 2A title game on the line as Flavin took the ball with the potential winning run for the Indians on second base.

Three pitches later, Flavin retired the side with a strikeout. The ninth-ranked Gladiators got a run across in the eighth for a 4-3 decision over No. 8 North East at Regency Stadium in Waldorf.

“I had been watching the defense all game, so I had faith that if [North East] put the ball in play they’d get the job done,” Flavin said. “I felt good and confident and I’m glad we got the job done.”

The Howard County school have one more task, Saturday at 4 p.m. at Regency against Patuxent for the state championship. Patuxent of Southern Maryland ended No. 11 Liberty’s season, 3-1, in other 2A final four contest Wednesday in Waldorf.

Glenelg (18-5) took advantage of a couple of North East errors in the top of the eighth to score the winning run, with Zach Lafountain scoring on Todd Calhoun’s squeeze bunt. Jackson Kelley then came on to slam the door on the Gladiators’ semifinal win, striking out three in the bottom of the eighth.

Through six innings, it did not appear any late-game drama would be in the cards, as Glenelg starter Lafountain was cruising through the North East lineup. The Gladiators hurler had allowed just three hits and had not allowed a runner to advance first base.

But the Indians rallied in the bottom of the seventh, with Luke Keefer’s RBI double cutting the deficit to 3-1 before Ethan Flaugher’s two-out, two-run double knotted the score.

“That’s a really good, quality baseball team,” Glenelg coach Steve Tiffany said. “For them to not have a runner in scoring position through six is impressive. You had to think they were going to compete at some point. You have to give them a lot of credit.”

Glenelg shook off the seventh to go back in front in the eighth, as Lafountain reached on a fielding error with one out. Another error the following at-bat left the Gladiators with runners at the corners and set up Calhoun’s game-winning bunt.

“The defense certainly helped,” said Lafountain, who struck out six in 6 2/3 innings on the mound, “and Todd laying the bunt down for me to get home. All of that was perfect. The defense was amazing. We didn’t make one error. That’s the reason we won.”

Down to its last at-bat, North East (21-3) found a way to extend the game Wednesday.

“That’s the way they did it all year. And I had confidence they would make a run,” said Brown, whose team won the UCBAC Chesapeake title this spring. “I think our guys were geared up and felt like they had to swing at anything close. I just feel like as an offensive team not patient at the plate and he exposed that impatient. I don’t know if it would have made a difference (in the outcome) but we needed to be more patient and see more pitches and just realize we had the talent to hit the ball.

A year ago, Glenelg’s season ended in a 14-inning heartbreaker.

Wednesday, the Gladiators weren’t denied, reaching their first state title game since winning the 1A crown in 1999.

“I bring in a kid who should have been preseason all-state. He’s had arm trouble and he throws the three biggest pitches of the game,” Tiffany said of Flavin, “then we get a suicide squeeze down…the guts of this team.”

Liberty had undefeated Patuxent on its heels early, but weren’t able to land a defining blow.

The Lions (14-6) had runners on second and third in the top of the second, but Patuxent shortstop Brady Powell made a diving backhanded stop on Matt Becker’s grounder in the hole to save two runs and keep the game scoreless.

The Carroll County squad had runners on first and second with none out in the third. Ryan Smith singled to center, but some confusion on basepaths turned a potential breakout inning into a double play.

Smith eventually came around to score for 1-0 advantage, but it was shortlived. Patuxent answered with three runs in the bottom half with Powell and Kaleb Elliott delivering RBI hits.

“My guys put forth every effort,” Liberty coach Travis Inch said. “They have done it all year. We started off hot, but I’ve always preached to the guys the little things are going to win you ballgames. We didn’t do the little things to beat them tonight”

Dominic Diblasi went the distance for the Lions, allowing just three hits while striking out 12. Nathan Robey started and worked three innings for the Panthers before being relieved by Powell, who pitched 3 1/3 of hitless relief. Ryan Moran relieved Powell, striking out the game’s final two batters on six pitches.

While a game short of the ultimate goal, Inch said his team had exceeded his expectations.

“We had one heck of a season,” he said. “To think that these seniors when they were freshmen, to be here, is just unreal. They put forth the work, love baseball and we became one of the best four teams in the state in 2A.”