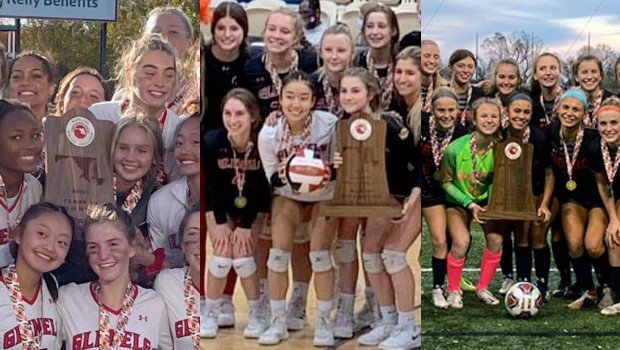 Stephanie Lathrop admitted to a little extra pressure as her Glenelg soccer team played for the state championship Saturday. The field hockey and volleyball teams had already won state titles and her team wanted so badly to join in the celebration.

The sophomore made sure they did, ensuring a historic fall season for the Gladiators with the game-winning goal late in the second half.

“To do it with two other sports is really amazing,” said Lathrop. “I remember there was one time someone said, ‘Who’s going to be the first to lose?’ Well, none of us ever lost. It was a great ride, just going along with your friends and motivating each other to keep winning and then also them winning, and having that pressure of now we need to win so we can all win was a great feeling after we finished it off.”

None of the girls realized at the time that they had become the first school in MPSSAA history to win field hockey, volleyball and girls soccer state championships in the same season. No private school has ever won all three in one season in the history of the IAAM either.

“It shows that girl empowerment for sure,” said senior Sydney Yoon, volleyball team captain. “It’s never been done before and I just feel a sense of pride knowing all the girls on our teams were able to win states. It’s such an accomplishment and it brings me so much joy knowing our banners will be hung at school and it’ll be all girls teams. That’s incredible to me.”

The field hockey team (15-1) was the first to win their Class 2A title, defeating Hereford, 1-0, on Nov. 13 on Kamryn Henson’s goal with less than three minutes to go. The volleyball team (16-5) won four days later with Mackenzie Calhoun pounding out 27 kills in a 3-0 win over Century. The soccer team (15-2) nipped Hereford, 2-1, in Saturday’s final on goals from Lathrop and Brianna Werner to polish off the trifecta.

“That’s quite a feat,” said Carol Satterwhite, executive director of the Maryland State Athletic Directors Association who spent 30 years as athletic director at Wilde Lake. “It’s tough enough to win one but much less three… It’s very impressive that you can have that many female athletes spread across three sports and come out with three state championships in one season.”

No one can pinpoint one specific secret to the Glenelg girls’ success this fall. The coaches and players point to the usual things that lead to a state championship — dedication, hard work, teamwork, chemistry, senior leadership and resilience among others. The players credit their coaches, field hockey’s Nikki Trunzo, volleyball’s Jason Monjes and soccer’s Vincente D’Antuono while the coaches give the credit to their players.

“I love our senior leaderships but we have some really, really outstanding female underclassmen athletes,” Trunzo said. “I addressed them on the way home from the state championship about how wonderful they are, a few other things and just the fact that my daughter (14-month-old McKinley) got to be around them. I just hope she has a piece of all of them and it shaped her as well.”

Glenelg athletic director Dan Sageman praised all three coaches for embracing the close community and family atmosphere at Glenelg, for being organized and for being able to adjust to the little challenges that emerge during a season.

“I feel like just their personalities, they keep pushing the positivity. They’re going to coach the kids. Obviously some people may not like them all the time, but at the end of the day, they’re family. As we’re going to find out when we go to our Thanksgiving meals, there’s some family you don’t get along with, but at the end of the day you’re family and you’re going to be striving for a common goal and we were just blessed that we ended up with all of them reaching that ultimate goal.”

As Trunzo said, one thing all three teams have in common is a super band of sophomores. Even though they had never played a full high school season — just a short league season earlier this year — and had never played for a state championship, sophomores led each team in scoring.

Six sophomores and a freshman started on the field hockey team, including Henson, their center midfielder and team captain. Their top four scorers are sophomores, Eyre, Henson, Theresa Stiller and Ashley Kim. Goalie Frankie DiValentin, who did not allow a goal in the playoffs, is a sophomore.

“We knew this class was going to be really good,” Monjes said of the program overall.

“Even through our partial COVID seasons, we could see the potential and they just raised their level of game when it mattered. I don’t know what it is about the water around here or anything, but they just never let the moment get to them. We were so lucky with all three teams. They just didn’t let the pressure get to them and just played out of their minds. They saved their best for last.”

D’Antuono said the shortened COVID-year season as well as playing in Howard County helped his team and certainly the others.

In the season that ended in mid-April, the soccer team won its first-ever Howard County championship and then had a short turnaround into the fall season which began with practice on Aug. 13. It wasn’t hard to pick up where they left off and jump right back into the tough Howard County competition.

Henson said a tough regular-season helped her team too.

“I think it definitely made us a lot better and a lot more prepared to go through the playoffs considering we play Marriotts Ridge and River Hill, two very strong programs. That loss (to Marriotts Ridge) made us learn a lot because that game was kind of early in the season. It made us realize how we had to play and what adjustments we needed to make,” said Henson, whose team shared the county championship with River Hill.

D’Antuono put the three titles in perspective for his players by stressing that although Glenelg has won a lot of state championships — 17 just by the field hockey, volleyball and girls soccer programs combined — they are rare for many programs.

“We like to think of Howard County as a pretty good place for sports, but there’s still many schools that haven’t had this kind of success,” he said. “For example, Mount Hebron won their first state title and made it to their first final game this year and Hebron is one of the older schools in the county. I was trying to convey to the kids that it’s few and far between.”

All three teams will have another celebration in a few months when their state championship banners adorn the already crowded walls of the Glenelg gym.

Sageman said he ordered the banners Tuesday and, although he has no specific plans yet, he envisions recognizing all three teams during a basketball game.

“I’m so excited,” soccer senior Ava Montgomery said. “Ever since I started going to Glenelg basketball games, I would look at the banners and I would count how many there were for soccer and I would just dream of having one up there for one of the years that I played. It’s just so amazing that we actually won and to have a banner that says, ‘2021 Girls Soccer State Champions’ and to celebrate with all the other teams this year as well.”

Maura Murphy, a field hockey senior, said, “It’s going to be amazing. I think it will be even more fun just knowing how many people are celebrating. It’s not only our field hockey team but volleyball and soccer as well. We’ll be able to celebrate with a lot more people.”

After that ceremony, Sageman may have to contemplate a bit of rearranging for the gym walls.

Not only is the year young, but, he said, “I’m hearing eighth graders coming in are even better. We might have to raise the ceiling to make room for more banners.”