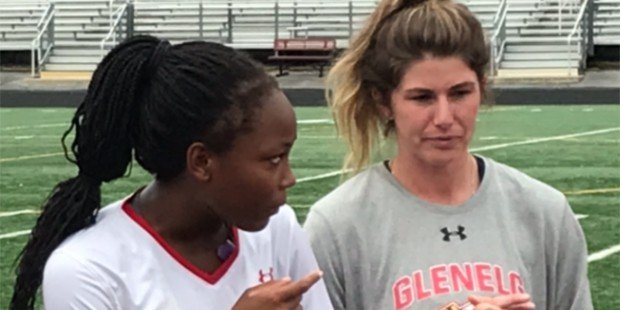 The Gladiators’ youngsters mature in win over No. 5 River Hill

Glenelg field hockey is coming of age quickly for a team with a core primarily of sophomores and a couple freshmen.

The No. 11 Gladiators got off to a fast start with two first-quarter goals Friday and went on to deal No. 5 River Hill its first Howard County loss, 4-2. Glenelg and River Hill are now the only teams in Howard County’s A Division with just one league loss.

All of the host Gladiators goals were scored by sophomores — AJ Eyre with two and Ashley Kim and Theresa Stiller with one each. Sophomore Kamryn Henson and freshman Brinkley Eyre each had an assist.

Glenelg coach Nikki Trunzo said it really helped her team when Kim tipped in a drive from Henson less than three minutes into the game.

“We’re a very skilled team but we’re a very young team,” Trunzo said, “and I think that first goal really gave them a little more confidence, because we haven’t been able to play four consistent quarters, so I think that kind of showed them, ‘OK we can do this.’”

The Gladiators (8-1 overall and in the county) scored on their first two shots of the game as AJ Eyre took a pass from her sister Brinkley Eyre and drove it into the cage from the top of the circle with 37 seconds left in the first quarter.

“I think our energy as a team really helped get us motivated and just our teamwork,” AJ Eyre said. “We came into this game ready to play. We knew their history and we came with intensity and just crushed it.”

That shocked the Hawks (10-2, 9-1), who seemed a step behind the Gladiators for most of the game. While Glenelg had great passing connections and seemed completely in sync, the Hawks didn’t often show much purpose behind their passing which enabled the Gladiators to intercept easily.

“We came out flat,” said River Hill’s Puja Nanjappa. “We were talking about us being on the championship high (from winning the Howard County title in the spring)… We’ve not been focusing on improving which has caused kind of a plateau. We came into this thinking, ‘We got this.’ Nothing to discredit [Glenelg]. I think they were the better team today, but I think we’ve learned so much from this game.”

The Hawks’ offense showed a little more life in the second quarter and they cut the lead to 2-1 when Claire Slade redirected Nanjappa’s drive into the goal 5:39 before the half. But the Gladiators asserted themselves quickly after the break when Theresa Stiller scored on a rebound off River Hill goalie Jocelyn Baker’s pads.

In the final seconds of the third quarter, River Hill again cut the lead to one on a penalty corner when Nanjappa assisted Maddie Vasilios, the 2019 Howard County Player of the Year.

The Gladiators didn’t let that bother them, striking quickly again in the fourth quarter as AJ Eyre finished off a penalty corner with a shot from the middle of the circle that gave them a 4-2 lead with 11:31 to go.

After that, the Gladiators defense of freshman center back Sarah Walker and outside backs sophomore Riley Oakes and senior Madeline Key held off the Hawks, who had several near misses in the final 10 minutes. Oakes, in her first start, blocked one shot on the goal line.

Henson did a terrific job of leading the midfield defense against Nanjappa and Vasilios, who often initiated the Hawks offense although they’re also two of the team’s top finishers.

“It was pretty hard,” Henson said, “especially knowing the ability that Maddie and Puja have to rip shots from the top of the circle. They’re like insane. They’re probably the two best people in our county right now. To keep them contained was pretty intense.”

The Gladiators hope to avenge their only loss of the season, 3-2 to Marriotts Ridge when they travel to meet the No. 14 Mustangs (6-2) Monday at 3:45.

Glenelg and River Hill, whose only other loss was to No. 9 Broadneck, will play again in the regular-season finale next Friday at River Hill, a game that could decide the county championship.

Pictured above: Glenelg’s Kamryn Henson makes a point as coach Nikki Trunzo looks on during halftime of the No. 11 Gladiators 4-2 win over No. 5 River Hill Friday afternoon. Henson, a sophomore, had an assist and played a stellar game both ways as the Gladiators dealt River Hill their first Howard County loss.