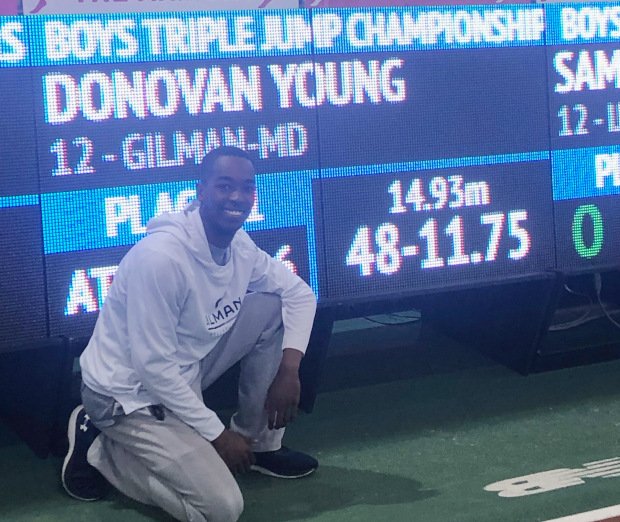 Young, who admitted to having a sup-par year thus far, by his standards, turned in a Personal Record leap of 48-feet-11.75 inches, which won the event and set a new Maryland state record. 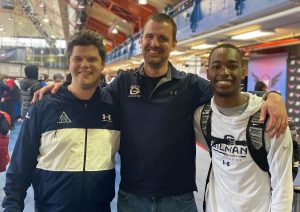 “It was special because I haven’t jumped as well as I did last year,” said Young in a post-race interview. “I started off well. I started to regress a little, so coming out here would not have mattered. Jumping that PR was just amazing for me and winning my first national championship.”

Young, an All-MIAA performer who recently won the long jump and triple jump as the 2022 MIAA Indoor Track Championships, said he put aside any negative thoughts in Saturday’s competition.

“I think I just trust myself,” he said. “I have been doing this a while, so even if things don’t go well, I know I can still jump with the best and I can still do something really special. Just staying confident and, just trust in my coaches and my practice, I knew it would all work out.”

His coach at Gilman, Matthew Tully, said preparation was the key.

“Donovan is an incredibly hard worker who has an uncanny ability to keep his cool in highly competitive situations,” said Tully. “His effort and preparation over the last few years put him in position to be successful today, and he was able to execute six impressive legal jumps with a memorable record setting last one.”

According to Donovan, he didn’t put too much pressure on himself.

“I just wanted to go out here and have fun, maybe get a medal,” said Young. “I’ve never won a national meet in the triple jump. I’ve always come close and never quite got it. For me to come out in my senior year, given how the rest of the year went, it was just something special.”