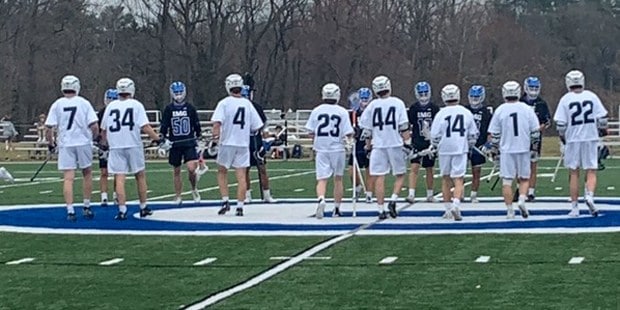 In what may be the final high school lacrosse game in the Baltimore area for at least a couple of weeks, Gilman School picked up a nifty 13-4 win over IMG Academy (FL), Thursday afternoon in Roland Park.

Pierce Washburn scored four goals to pace three Greyhounds with hat-tricks, while Sam King delivered a goal and five assists and Billy Spillman had a goal and three assists.

Gilman (2-1) was never challenged and scored the first nine goals of the game and led 12-2 at one point midway through the third quarter.

Charlie Pope had four points with three goals and an assist and Jack Tortolani tickled the twine three times.

IMG’s Matteo Corsi added the day’s fourth hat-trick with three goals and an assist. The Ascenders also got single goals from Brent McVicker and Cody Cross.

Thursday afternoon, Maryland Governor Larry Hogan announced all state public schools will be closed for two weeks starting Monday, March 16, in response to the Covid-19 virus. Shortly thereafter, Baltimore Archbishop William Lori announced that Baltimore area Catholic Schools will be closed for the same period of time. That was followed by similar announcements from many other private schools, including Gilman, which will be shutdown through April 3rd.

It remains uncertain what high school athletic events, if any, will take place during this time.