Though Gilman School’s football team is the clear cut No. 1 team in the area, some wondered whether its defense could stop a high-quality offense.

The Greyhounds erased those doubts Saturday evening. In a matchup of the best of the Baltimore and D.C. region, Gilman routed Good Counsel, 28-7, in the finale of the inaugural I-95 Kickoff at Unitas Stadium.

Senior quarterback Darius Jennings rushed for 144 yards and a touchdown and a threw a 28-yard touchdown pass to junior Cyrus Jones. Junior running back Kenneth Goins added a 24-yard touchdown run, and Devon Porchia returned an interception 28 yards for another score.

The Greyhounds scored 21 unanswered points in the opening half, turning the anticipated matchup of state’s football powerhouses into a resounding mismatch. A season ago, Gilman allowed an average of 49 points against the likes of Good Counsel, DeMatha and Colorado’s Bear Creek.

“These guys [Good Counsel] have a lot of weapons,” said Gilman coach Biff Poggi. “It was a great defensive game, but we controlled the ball on offense. What’s lost is how we kept them from getting big plays in the kicking game.”

“Whatever you do in practice you’re going to see out on the field,” said Porchia, a junior linebacker. “We’ve been this talking about this game since the summer. This might have been the biggest game of the season.”

Porchia definitely made the most important play so far this season for Gilman’s defense, stepping in front of a Zach Dancel pass and going untouched into the end zone, sending the Greyhounds into intermission with a three touchdown lead against the state’s No. 1 squad and nation’s No. 9 by USA Today. Good Counsel, which scored 49 points in last season’s meeting, finished with 202 yards (66 in second half) Saturday.

“It’s all because of our scout team go hard each week and gives us a good look,” said junior two-way linemen Brian Gaia. “It was a team effort.”

“This year, we want to hit people,” said Gaia.

Gilman’s offensive line battered the Falcons at the point of attack with Goins and Jones combining for 95 yards on the ground. But it all began with another dazzling performance by Jennings.

The Greyhounds took the opening drive 71 yards in seven plays as Jennings went in from four yards. Jennings accounted for 61 yards in the series, including a 30-yard burst on third-and-2.

Good Counsel pulled even as Dancel (7-of-14, 100 yards) found Vincent Groce across the middle for a 14-yard score in the second quarter, but Jones returned the ensuing kickoff to the Falcons’ 38. Two plays later, Goins (38 yards) broke up the middle for a 24-yard touchdown. 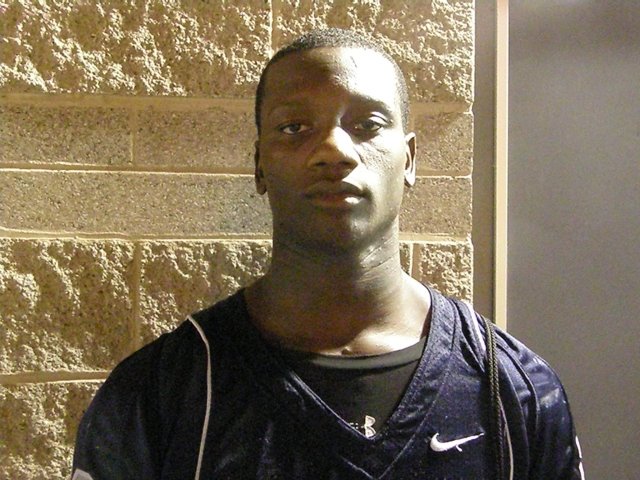 The Greyhounds were again back at Good Counsel’s 38 as the ensuing kickoff went low and deflected off a Falcon player, and McMaster fell on it. Three plays later, Jennings made a run fake, stepped back and threw a strike to Jones across the middle for a 28-yard score.

“We wanted to get the ball first because with myself and Cyrus deep, we think we can set a spark,” said Jennings, who completed four of seven passes for 73 yards. “We drove down and score and kept it rolling from there.”

After rallying for an impressive win at Ohio powerhouse St. Xavier last weekend in its season opener, Good Counsel didn’t have a response Saturday.

“Jennings is pretty good. They’re a pretty good football team,” said Falcons coach Bob Milloy. “They were the better team and everybody saw that.”

Gilman’s attention turns to Don Bosco Prep, next weekend at Morgan State. The New Jersey program was the nation’s No. 1 team last season according to several websites. The following weekend, DeMatha Catholic return to Baltimore with the state’s top ranking on the line.

“We got to take tomorrow off, enjoy the win, then put this in the past,” said Jennings.