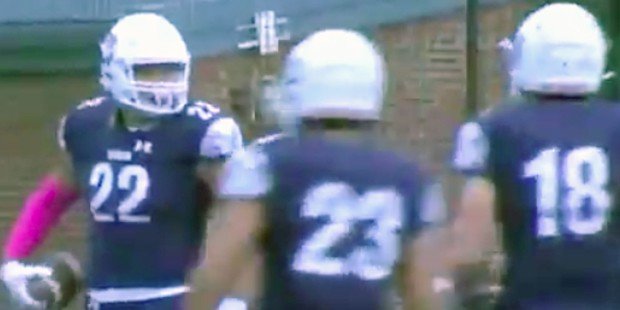 Gilman’s defensive landed some early haymakers as the Greyhounds forced five first quarter turnovers to build a big early lead against visiting Archbishop Curley and then held on for a 47-40 victory as the counter-punching Friars battled back.

A fumble recovery on Curley’s first drive led to a 6-yard TD run for Gilman quarterback Savion Witherspoon. Gilman followed with two defensive touchdowns as Kam Custis rumbled 22 yards with a fumble recovery and Key Torain scored on a 10-yard pick six, for a quick 19-0 lead.

Undaunted, Curley finally finished a drive, getting on the board with a 5-yard touchdown run by junior Zeshaun More to pull with 19-7, late in the opening quarter.

Early in the second quarter, Gilman thwarted another Curley drive as Jayden Barkside came up with an interception in the end zone for the Greyhounds sixth turnover. That led to an 80-yard drive, capped by a 71-yard scoring strike from Witherspoon to sophomore Dejuan Lane to stretch the Gilman lead to 26-7.

Perhaps staggered, Curley took the 8-count and kept on swinging, scoring 22 points in the final six minutes of the second quarter to, stunningly, move in front. It started with an 84-yard kickoff return for touchdown by senior Jeremiah Lewis.

That was followed by a fumble recovery by the Curley defense and on the very next play sophomore Caron Madison raced 49 yards for the first of his three touchdowns in the contest, pulling Curley within five at 26-21. The Friars then blocked a punt and Madison converted that into a 1-yard run. A two-point conversion pass from Logan Nordeck to Moye put the Friars on top 29-21.

Just when momentum had appeared to switch completely in Curley’s direction, senior Kenny Green responded with a 100-yard kickoff return to send the Greyhounds to the half with a 33-29 lead.

The resilient Friars struck back with a 50-yard TD run by Madison and a two-point conversion pass from Nordeck to Challenger Moss, pulling the Friars within three, at 40-37.

Gilman, with just 1:04 left in the fourth quarter, upped their lead to 47-37. It proved enough to get the win, but the Friars went down fighting, kicking a 41-yard field goal with just one second left to set the final score.

The victory moves Gilman to 4-1 on the season, while Curley dropped to 1-5.

Pictured above: Kam Custis celebrates with his teammates in the end zone after scoring on a 22-yard fumble recovery return, in the first quarter, it was one of six first quarter turnovers secured by the Greyhound defense in their 47-40 win over Archbishop Curley.