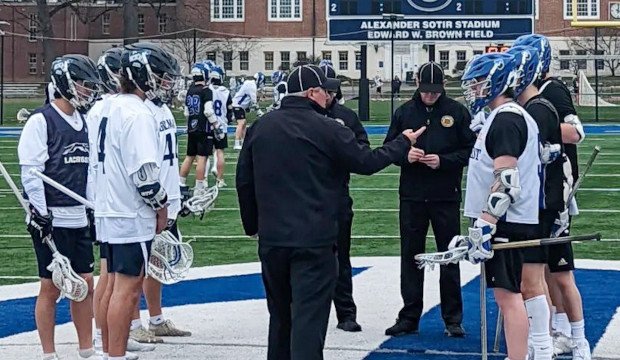 It was a big afternoon for Gilman’s sophomore class. Wednesday, as Michael Maloney and his classmates provided the majority of the offense in a 13-7 non-conference lacrosse victory over Canada’s Everest Academy in Roland Park.

Maloney scored four goals, all in the second half, as the Hounds staved off their guests from north of the border.

Before the sophomores reached top speed, Gilman received three first half goals from junior Wally Radebaugh to take a 5-2 advantage.

The Greyhounds scored five times in the third quarter, including three from Maloney, as well as one each from fellow sophs Jay Wilkerson and Clayton Baddley, growing their lead slightly to 10-6.

Senior Chase Brody scored in the first minute of the fourth quarter, before Wilkerson fed Maloney for another score to up the lead to 12-6. Everest got one back, but Baddley scored his second of the afternoon to stretch Gilman’s margin to 13-6.

Wilkerson also scored in the first half to finish with a pair of goals and junior Oscar Woloson also score in the victory. In addition, Maloney had two assists and Radebaugh had one. Gilman goalkeeper Kyle Morris also had a strong performance, stopping 10 shots.