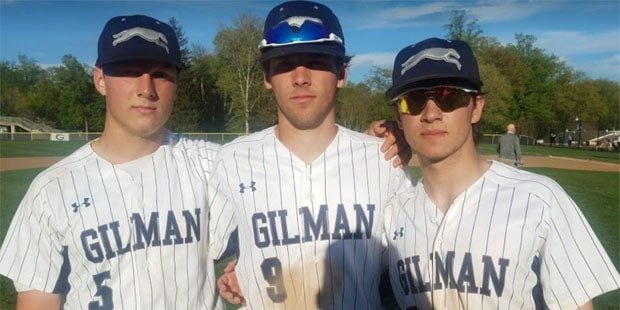 If not for a walk-off grand slam by Calvert Hall College senior star Jose Torres, last Tuesday in Towson, that vaulted the Cardinals to a come-from-behind 5-2 win over 3rd-ranked Gilman School, the Greyhounds could have been going for a season sweep of the first place Cardinals when they hosted them in a return match Monday afternoon in Roland Park.

With Calvert Hall armed with the brooms and a shot at a sweep of their own, Gilman turned the tables on he second-ranked Cards, prevailing 10-5, and leaving Calvert Hall with its first MIAA A Conference loss of the 2019 season.

Calvert Hall made six errors on the day, two of which came in the first inning, when Gilman’s leadoff hitter Ryan Williamson hit a hot smash to third in the home that caromed into left, was then bobbled, and Williamson raced second to start the inning for the Hounds.

Casey Bishop then reached on an infield error, moving Williamson to third. Williamson then scored on a deep sac-fly off the bat of Pierce Bennett. Clean-up hitter Jackson McCambridge followed and was credited with an infield single when no one covered first, after he hit a slow grounder down the first-base line, putting runners on first and third.

Tyler Martinez followed with a grounder towards second that found it’s way to right when Hall second baseman Alex Kahn had trouble tracking the ball as Bishop raced by him, and McCambridge went to third. McCambridge subsequently stole home on a perfectly executed double-steal.

Bennett drove in two more runs in the fourth and Tripp Myers hit a bases-loaded single in the fifth to plate two more.

Danny Rosenfield got the win in relief for coach Larry Sheets, going 2.2 innings and holding the Hall to one run and three hits, after taking over from Matt Leikus with one out in the top of the fourth. 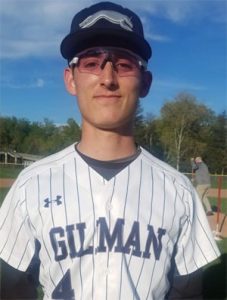 Danny Rosenfield got the win in relief for Gilman, yielding one run and 3 hits in 2.2 innings of work.

“I located my fastball today,” said Rosenfield. “I felt good out there. My change-up was my secondary pitch, which was also working. I threw strikes and trusted my defense.

“They’re a good team. You’ve got to work hard on every batter, top to bottom.”

Sheets said Rosenfield is getting hot at the right moment.

“Danny threw well,” said Sheets. “He’s peaking at the right time. He keeps hitters off-balance with his curveball and change-up and he had enough on his fastball that he was able to get it by them today.

“Last week was a much cleaner day on a turf field at Calvert Hall. Today, we got a few hits in the right spots and things went our way.”

Tripp, who closed out the seventh inning for Gilman, said he was grateful for the opportunity to contribute.

“This was a huge team win,” said Tripp. “Calvert Hall is a great team and we will see them again in the playoffs, but we’ve got to keep winning to get to the playoffs.”

“Last week we lost on that walk off grand slam, but we came out today and wanted to win and we wanted it a little more than they did,” said Bennett. “We battled and grinded and came out on top.”

Williamson pointed that his team did a good job of putting pressure on the Calvert Hall defense.

“We put the ball in play and made them make some plays,” said Williamson. “After hitting well in batting practice today, we were ready to play.”

Torres stayed hot with three hits, an RBI and a run scored for the Cards. Garrett McIlhenny had a single, a triple, an RBI and scored two runs, and Parker Landwehr and Alex Khan each had two hits.

After Calvert Hall had a few lucky breaks last week in the bottom of the seventh against the Hounds in their comeback win, coach Lou Eckerl said he’d rather be lucky than good.

“Today. we had no luck,” joked Eckerl. “There were too many errors, too many hit batsman, too many walks, and our defense really didn’t play well.

Also on Monday, Loyola Blakefield topped No. 11 Mount St. Joseph, 8-5, to climb into fourth place in the conference and No. 13 McDonogh School captured a thrilling, 9-8, come-from-behind non-conference win over Old Mill in 10 innings.

With Calvert Hall’s loss, Loyola now becomes the hottest team in the league, with six straight wins. Down 5-4 entering the bottom of sixth, Loyola scored four times to pull out the win.

Snider came on in relief of Nate Beal in the fifth inning and pitched three scoreless innings for the Dons to get the win.

In its victory, McDonogh (11-6) surrendered two runs in the top of the 10th to fall behind Old Mill 9-7. The Eagles, however, rallied for three runs in the home half of the inning to pull out the victory.

Pictured above: (from left) Tripp Myers, Pierce Bennett and Ryan Williamson combined to drive in seven runs for Gilman.