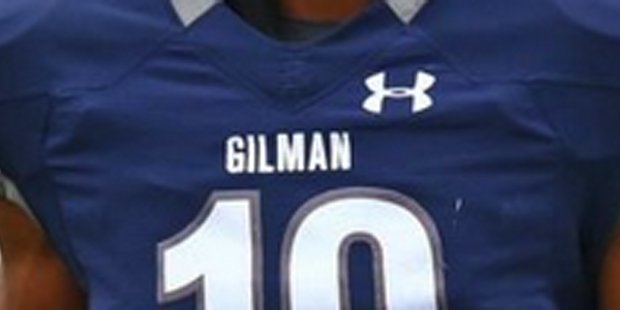 It was a back-and-forth thriller at Boys’ Latin, Saturday afternoon, as Gilman made the short drive across Roland Park to battle the Lakers in a non-league MIAA football encounter.
The teams took turns trading touchdowns for much of the game, before the Greyhounds prevailed, 24-21, on a 21-yard field goal by senior Dan Huff in overtime.
Prior to the winning kick, Gilman’s defense stopped the Lakers on downs to get the opportunity to score and end the contest.
The two teams played the first half to a 14-14 standstill, with Bl breaking on top, with 3 minutes to play in the first quarter, with a 32-yard touchdown pass from Kaden Lymon to Braeden Hammett.
Gilman (2-1) answered in the second quarter when Dejuan Lane was on the receiving end of a 10-yard touchdown toss from Matt Parker. Then, with three minutes left in the opening half, Parker broke a long run to put the Greyhounds in the Red Zone and before connecting with Lane again, this time for an 18-yard touchdown and Gilman took a 14-7 lead.
Running the two minute offense, Boys’ Latin got the ball back downfield, late in the half, and scored with less than minute to play as Lymon found Nathan Crouse for 17-yard touchdown pass, sending the game to intermission even.
Boys’ Latin (2-2) went back in front with six minutes remaining in the third quarter on a 1-yard TD run by Seth Taylor, but it took Gilman less than two minutes to respond. Parker moved the Greyhounds inside the BL 5-yard with a long completion and Key Torain followed with a 3-yard scoring run to tie the contest once again, 21-21.