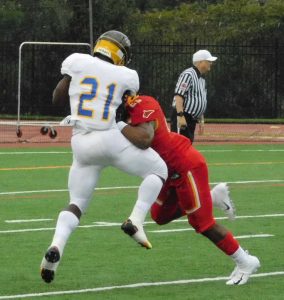 Henry A. Wise’s Brandon Bell (21) is met by Calvert Hall’s Mike Johnson after a pass play during the first half of Saturday’s football game. The seventh-ranked Cardinals ended the Prince George’s County school’s 43-game winning streak with a thrilling 19-14 victory at Russo Stadium in Towson.

Calvert Hall College’s Sean Tucker had some tough sledding in the first half of Saturday’s non-conference football game against three-time defending Class 4A state champion Henry A. Wise on a damp and cool afternoon at Paul Angelo Russo Stadium in Towson, finishing with negative yardage on a dozen rushing attempts against the stout Puma defense.

Fortunately for the Cardinals, things changed in a significant manner over the final two quarters against the Prince George’s County power, ranked fourth in the state media poll and fourth by the Washington Post.

The tough-as-nails 5-foot-11, 190-pound senior running back went into downhill mode after the intermission, leading Calvert Hall to a come-from-behind 19-14 triumph by rushing for 103 yards on 12 carries and scoring two touchdowns.

Tucker broke three or more tackles on a 30-yard jaunt in the third quarter to give the Cardinals (3-0 overall), ranked No. 7 in Baltimore by VSN, their first lead, 13-7, with three minutes, 23 seconds remaining in the third period.

Tucker’s final TD — a 2-yard plunge with under three minutes to go in regulation — was set up by his 26-yard scamper into the teeth of the Wise defense.

“There are a lot of great running backs in the state of Maryland,” Calvert Hall coach Donald Davis said. “But I wouldn’t trade any of them for Sean Tucker.”

Tucker said that he told his teammates what to expect from in the Cardinals’ bid to snap the Pumas’ 43-game winning streak, the state’s longest and nation’s second-longest run.

“I told my team that I was going to do what I do best,” he said. “Run the ball at full speed every time I get the ball.”

Wise coach DaLawn Parrish, a former standout defensive back at Howard in the mid-1990s, said that his team was “overly aggressive” on Tucker’s best runs.

“We blew up their blockers,” Parrish said, noting that the defenders would have been better served fending off the blockers before approaching Tucker instead of arriving a hair late to bring him down.

The game, which began in a downpour before the rain subsided and finally stopped in the second half, was a defensive battle from the get-go.

While it’s true that Tucker and fellow running back Cobie Floyd were held in check by the Pumas, Calvert Hall did a terrific job in its own right against Wise’s standout senior running back Brandon Bell.

And although Bell scored the game’s first TD to give the visitors a 7-0 advantage late in the first quarter, on a 3-yard rumble, he was mostly prevented from hurting the Cardinals.

Calvert Hall had a golden opportunity to jump ahead early after junior cornerback Jaden Beckles blocked a punt and recovered the ball at the Wise 10-yard line, but came up empty when junior kicker Pete Moore’s 36-yard field goal attempt fell short.

Moore would bounce back to convert two other tries from 21 and 23 yards, respectively, to close the gap to 7-6 at halftime.

His second conversion came after senior Calvert Hall junior defensive back Mike Neal’s fumble recovery at the Wise 25 midway through the second period.

After Tucker’s first score gave the Cards the lead, the Pumas went back ahead on another Bell 3-yard bolt.

“We really wanted to stop the run,” Davis said. “Because if they can run the ball, that opens things up for them. So, you want to force them to throw. But they punished us (by passing), too.”

Wise made things very interesting on its final drive, especially when a 37-yard double pass from Williams to backup QB junior Kiysean Clardy to senior wideout Isiah Hazel gave the Pumas a first down at the Cardinal 10 with 26 seconds left.

After a 5-yard pass interference penalty was marked off, Williams was stuffed at the line of scrimmage on a scramble attempt and then he was nearly sacked by Calvert Hall sophomore linebacker Mike Johnson on the final play as time expired.

“Coach put me in, and I just wanted to come in and make a play,” Johnson said. 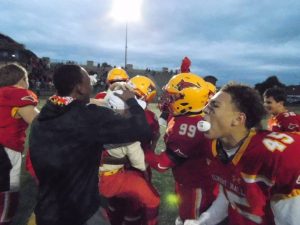 The Cardinals next challenge will be when they travel to take on Riverdale Baptist on Friday night while Wise will host PG County rival Bladensburg the same evening.