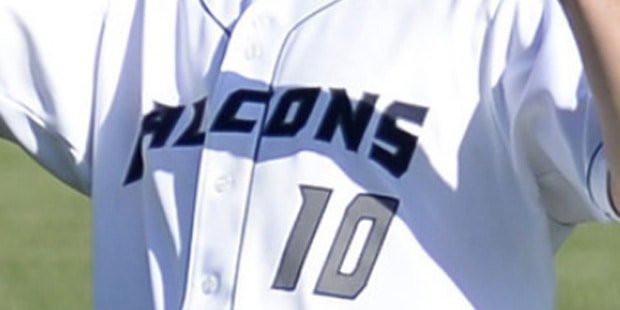 Falcons and Lakers will meet in the winner’s bracket final on Wednesday; Updated bracket here

Because of Monday’s heavy rain, both MIAA B Conference winner’s bracket baseball playoff games scheduled for Monday were shifted to the turf diamonds at Blandair Park in Columbia and played simultaneously.

This ultimately worked out well for the two lower seeds as third-seeded Boys’ Latin and fourth-seeded Gerstell Academy each came away with upset victories to advance to Wednesay’s winner’s bracket final.

Gerstell, behind its ace Reece Early, one of the top players in the conference, surprised top-seeded Glenelg County, 10-7.

The Falcons (14-6) jumped out to a quick 6-0 lead with three runs in the first and three more in the second. Chris Hagan had a big RBI double and later scored to lead the Falcons in the first two innings.

Early got the win as he struck out five and only gave up two hits. Graham Vaeth closed the final few innings for Gerstell and induced a game-ending double play as GCS threatened with runners at second and third with one out in the bottom of the seventh.

Gerstell took advantage of seven Glenelg Country walks and an uncharacteristic six errors by the Dragons (17-4).

Boys’ Latin (18-6), which has won the last three league titles overwhelmed second-seeded St. Vincent Pallotti, 17-4, in the other contest, behind a huge day from senior Sam Grace.

The game was quite a contrast to the two games that these teams played during the regular season, both which were low scoring nail biters. Scoreless after three frames, the Lakers went to work in the fourth and scored seven runs. Two runs scored on a Grace single to center.

In the bottom of the fourth, Pallotti (15-8) came back to score four times. Blake McConaty’ s inside the park home run closed the gap, but BL threw out another would-be run at the plate, later in the inning, and maintained the its lead at 7-4. In the sixth Grace put the game out if reach with a double and a triple, driving in four runs in the inning.

Boys’ Latin will host Gerstell and the winner advances directly to next Monday’s finals at Harford Community College. The two teams also met in the final a year ago.

Monday’s elimination game between Mount Carmel (13-9) and Annapolis Area Christian (10-12) was postponed and the two teams are scheduled to play that game on Tuesday. The winner of that game will advance to play at Pallotti on Wednesday. Glenelg Country will return to action on Thursday, hosting the survivor of Wednesday’s game.