Gatton’s scoreless streak ends, but he keeps on winning 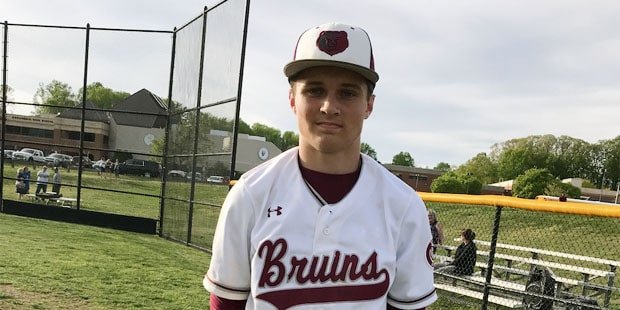 One streak ended on a personal note, but another continued on a more important team note.

Nick Gatton’s consecutive scoreless innings pitched streak came to a halt at 27 on Wednesday afternoon in Cape St. Claire, but his team, the sixth-ranked Broadneck Bruins, posted their third straight victory by 7-4 over No. 8 Severna Park.

It was the Anne Arundel County league leading Bruins second win this season over the defending Class 4A East Region champion Falcons, with Gatton pitching both wins.

Broadneck coach Matt Skrenchuk praised still another outstanding performance by Gatton who he called “our guy” – meaning the ace who has shutdown the hard hitting Falcons twice and who has his priorities in order.

“It definitely takes a lot of pressure off me,” said the senior right-hander.

Gatton, who in 31 innings has walked only one – that’s phenomenal – while striking out 23 and has a microscopic 0.90 ERA.

“Going out there everybody knew here that there was a big stake on the line,” said Gatton. “Am I sad it’s over? Yeah, but it’s a little disappointing to see it’s over. But you know what we won the game and that’s all that matters.”

The win leaves Broadneck (12-2 overall) atop the Anne Arundel circuit at 10-2 in the league, two games up on now third place neighbor Severna Park (12-4, 8-4) and one up on No. 12 South River (11-4, 9-3). The latter Seahawks come calling on the Bruins on Thursday at
4:00 p.m. The game was moved from Friday because of the rainy forecast for the start of the weekend.

Severna Park’s seventh-year coach, Eric Milton talked about the talent and parity in the league from top to bottom.

“I haven’t seen it this close since I’ve been here and my team (lost a host of key players from their 4A State finalist) has exceeded my expectations,” said Milton. “I’m pretty proud of these guys.”

Scattering nine hits, striking out five and not walking a batter on 103 pitches, the complete game lifted Gatton’s record to 5-0. He was also 4-for-4 with the bat and his courtesy runners scored three times.

Leadoff man, senior shortstop Ryan Smolen was 2-for-3 with three runs scored and senior Dylan Tenney doubled in two huge runs with two outs in the bottom of the fourth and added another clutch RBI
knock in the sixth.

But, it wasn’t meant to be and it took one of the metro area’s top hitters, in the Falcons’ junior first baseman/pitcher Brendan Simonds, to abruptly end Gatton’s streak at 27 with the first of his two knocks to center. Gatton, who had shutout Severna Park, 3-0 to start his impressive string back in March, held the Falcons scoreless
through three innings on Wednesday.

Josh Horgan led off the Falcon fourth with a single to left that was misplayed and he advanced to scoring position at second base. Simonds singled up the middle on Gatton’s first pitch to him, making it 4-1 Broadneck. A familiar sight at Broadneck this spring would follow to score Simonds’ pinch runner on a 4-6-3 DP – second
baseman Rico Soto to shortstop Smolen to first baseman Matt Isaac.

Soto had five assists on the day while sophomore centerfielder Nick Toskov had five putouts, including the last three outs of the game after the Falcons started the seventh with a single to center by Cory Bodnar. Tokov’s third and final catch of the seventh came off the bat of Horgan to deep center, approximately 30 feet in front of the 404-foot sign, and it was a turnaround, spinning grab.

“Our defense is phenomenal, it’s a lockdown defense,” said Gatton. “Everybody knows their role.”

Broadneck answered in the bottom of the fourth with two more runs off losing pitcher, junior right-hander Evan Lewis (4-2). It was on the afore mentioned Tenney’s clutch, two-out, two-run two bagger to increase the Bruins lead to 6-2 and Tenney’s encore single in the sixth to cap the Bruin scoring.

“Our kids are resilient,” said Skrenchuk. “Those guys (Falcons) scored two runs against us in the fourth inning (to make it 4-2) and we bounced right back and scored two more runs. The other day Curley tied the game in the top of the seventh and we came up and got a home run by Jackson (Halla) to win it (9-8). They are mentally tough.”

It’s all part of a great team chemistry that the Bruins visibly display. Shortstop/leadoff batter Smolen describes it as, “We try to keep it loose – it’s flowy – I’ll say that.”

Pictured above: Broadneck senior lead-off batter and shortstop Ryan Smolen had two hits and scored three runs to help the sixth-ranked Bruins to a big 7-4 win over No. 8 Severna Park in Anne arundel county action.