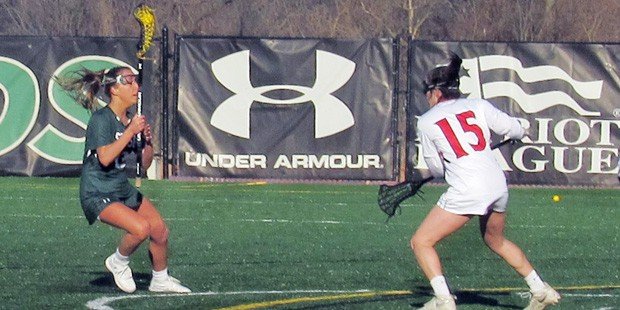 It took St. Paul’s School less than three minutes to put the first goal of the game on the board and the Gators kept them coming in a steady stream, as they overwhelmed IAAM A Conference rival Maryvale Prep, 16-8, in the opening game of the 2019 PNC Lacrosse Invitational, Saturday evening at Loyola University’s Ridley Athletic Complex.

Despite winning the first four draws of the contest and holding an 8-3 advantage in the first half, Maryvale could not convert that success into a possession advantage or an abundance of scoring opportunities.

(From left) Shelton Sawers, Alex Pirisino and Caroline Pearce scored four goals each in St. Paul’s School for Girls 16-8 win over Maryvale in the PNC Invitational.

Instead the Gators, who were playing their season opener, raced out to a 6-0 lead within the first 15 minutes and SPSG led 7-2 at the half. Shelton Sawers led the first half assault with a hat-trick and finished the game with four scores. Alex Pirisino produced six points with four goals and two assists and Caroline Pearce had four goals and one assist for SPSG.

The fast start was something the Gators were seeking, according to Sawers.

“I think we came out with the intention of starting fast and hard, and we got to our goal,” said the senior midfielder. “Once we start fast we kind of keep that momentum. It’s really good for us to start out that way.”

Lizzie DeGuzman, from Payton Rowley, put the Lions on the board for the first time, with 2:39 left in the first half, but Sawyers and Annie Ponsi countered immediately for SPSG and the Gator lead grew to 8-1. Maryvale, however, took some momentum into the half, when Rowley converted a free position opportunity, with just seven seconds to play in the half, to cut the deficit to six.

St. Paul’s coach Mary Gagnon was not pleased with her squads work with the draw in the first half, but they did rebound to win 8-of-15 in the second half.

“We talked about that at halftime,” said Gagnon. “We definitely weren’t happy about that. We just weren’t boxing out. We were pushing the ball where we wanted to, but we weren’t picking it up. We have to do a better job of that.” 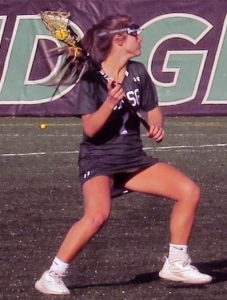 SPSG’s Angelina Pino, who scored a goal, looks to pass on the turf at Ridley Athletic Complex.

Pirisino scored her second goal of the game, just 51 seconds into the second half, but Maryvale scored three of the next four goals in the contest to pull within five, at 10-5, with 19:02 to play. The Lions, however, could not sustain the push as St. Paul’s scored the next three and, after a Maryvale score by Kristina Lysik, the Gators scored three more to take their biggest lead a 16-6, triggering a running clock.

Maryvale continued to battle and netted the final two goals of the contest to finish within eight. Claire Bockstie scored four goals for the Lions, all in the second half, to match her three counterparts from St. Paul’s for game-high honors. Rowley finished with two scores for Maryvale.

Overall Gagnon was pleased with her team’s first effort of the season.

“I’m very proud of our team,” said the second year Gator head coach. “One of our goals this year is teamwork and I feel like we did that up and down the field. Technically we played really well in the first half on the defensive unit. We spread the ball out on attack and had at least five different people score, so you really can’t focus on one player.”

One other star for St. Paul’s was goalkeeper Leah Wareheim, who made five saves, all in the first half. Several came at point blank range before the Gators had established control of the contest.

The players enjoyed the opportunity to play on a college stage in a contest that was taped for delayed broadcast (Sunday at 5:00 p.m. on the CW Baltimore).

“I think it was awesome,” said Pirisino. “We got a lot of fans out. It was great to show them what we have and get excited for the season.”

“It was fun,” she said. “It made us feel like we were in college, but still in high school. To have that exposure before college was great.”

Gagnon said the victory will help her team moving forward.

Pictured above: Alex Pirisino (left), who scored four goals and had two assists, works against the defense of Maryvale’s Sophia Antonopoulus.