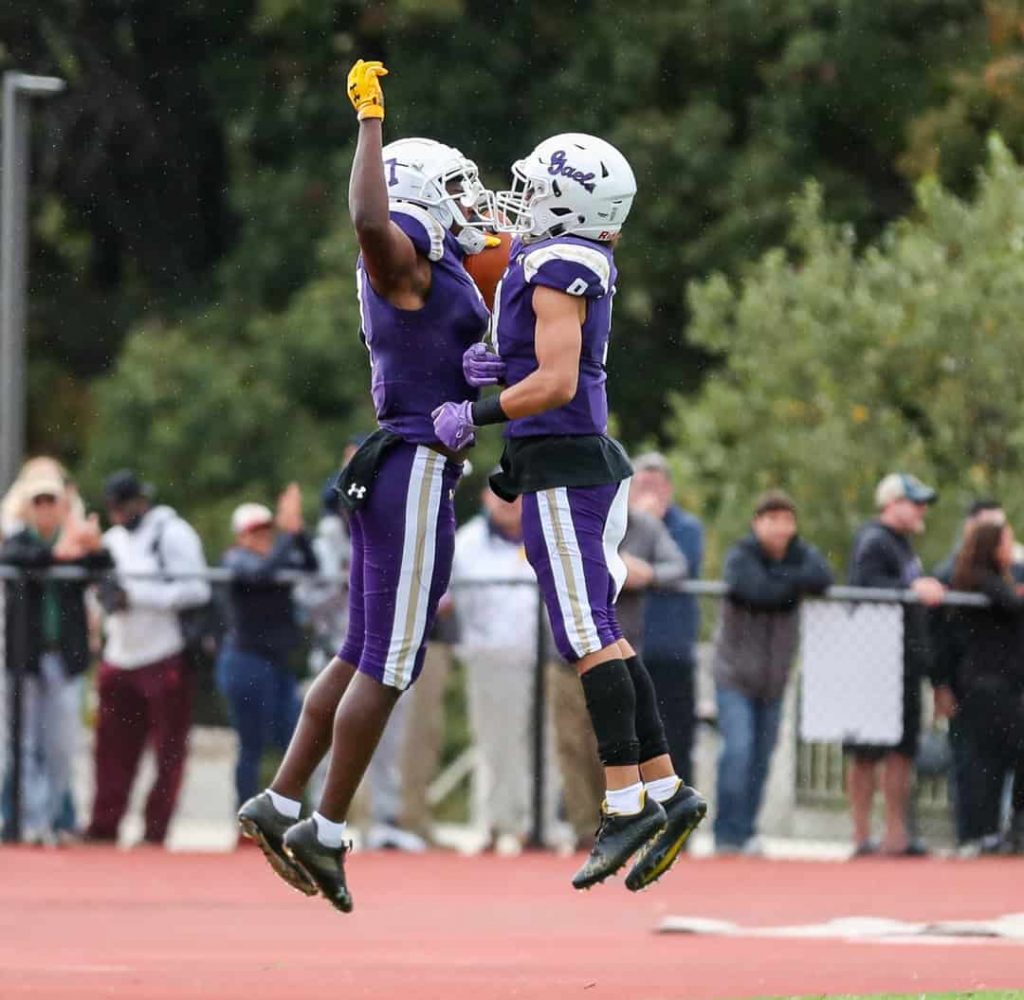 Mount St. Joseph’s Trey Goodridge (left) celebrates his receiving touchdown with teammate Ronald Brown in the second quarter of Saturday’s MIAA A Conference football game with Calvert Hall. The third-ranked Gaels improved to 4-0 in league play with a 24-14 victory over the fourth-ranked Cardinals at Pleyvak Field in Irvington. (photo – SportsMajors)

Errors plagued Mount St. Joseph High and Calvert Hall College during the first half of their pivotal MIAA A Conference football clash Saturday afternoon. But it was how the third-ranked Gaels capitalized on the No. 4 Cardinals’ miscues that powered them to a crucial 24-14 victory at John Pleyvak Field in Southwest Baltimore.

Mount St. Joseph (6-2 overall) built a 24-0 advantage to improve to 4-0 in MIAA A play and maintain a share of first with second-ranked and undefeated Archbishop Spalding. The Irvington school secured a home semifinal game with its third straight victory.

“On offense, we’re always taught we’ve got to capitalize on everything because we have . . . a great team, but sometimes we have a little disconnect, but we can capitalize on those mistakes they make, (and secure) great yardage, then it works,” said Gaels senior lineman Stephen Schulze. “We’re definitely top two between Spalding and us. When we play Spalding, we’ve just got to bring it to them as hard as we can.”

Neither squad looked sharp at times Saturday as the two teams combined for three turnovers and two errant snaps on punts that led to great field position for the other side. Not to mention, both quarterbacks combined to complete just six of 17 passes, and numerous penalties were committed, including big yardage flags for holding and pass interference.

Mount St. Joseph’s, however, jogged to the locker room on its Homecoming with a 21-0 halftime lead largely on the conversion of two costly turnovers by the Cardinals (6-2, 2-2 MIAA A) into 14 points while limiting Calvert Hall to 116 offensive yards in the first 24 minutes behind a relentless defensive line that was spearheaded by Schulze, Spencer Toth, Gavin Bage, and Nick Paxton and that chased Cardinals quarterback Noah Brannock (9-for-19, 135 yards) on nearly every pass play.

“We’ve got a great defensive line,” Schulze said. “I can’t emphasize that enough. We bring the pressure. Not only with our linemen, but our linebackers as well. It’s a lot of blitzes.”

The Cardinals actually came out strong on offense, driving the ball down to the Gaels 21-yard line before having to settle for a field goal that was blocked. After a couple of fruitless drives by both teams, Mount St. Joseph’s recovered a fumble by Dan Harper at the Calvert Hall 45-yard line.

Three plays later, Dominic Kibby deftly hauled in a pass by Winston Watkins on the Calvert Hall sideline for a first down at the Cardinals 2-yard line where Bryce Cox (110 rushing yards) rushed in for a 6-0 lead as the extra point failed with 1:02 remaining in the first quarter. Kibby was able to drag one foot in as the momentum of the pass drove him out of bounds.

The Cardinals again moved the ball down the field, but Brannock misfired on a fourth-down pass under heavy duress. On the next play, Watkins hooked up on a 46-yard pass play to Trey Goodridge to move the ball deep into Calvert Hall territory where Sean Williams eventually scored from six yards out for a 14-0 lead following a successful two-point conversion jump ball pass to Kibby from Watkins with 8:21 left in the second quarter.

That advantage would soon increase to 21-0 as Mount St. Joseph’s defensive back Charles Wilson stepped in front of a Brannock pass, who was again under heavy duress, on the Cardinals’ 27-yard line. Four plays later, Watkins found Goodridge on a seam route right down the middle of the field for a 16-yard touchdown strike with 6:47 left in the half.

“We’ve been watching film all week and we saw the routes they were running,” Wilson said. “I knew it was going to be an out route and another slant coming in, so I just read it, dropped back, and got it. It was a good win. We’re 4-0 in the conference.”

An errant snap gave the Gaels excellent field position again in the second quarter as the Cardinals rushed the snap on a fourth-down punt attempt to catch Mount St. Joseph’s with 12 men on the field. Instead, the rushed snap gave the Gaels the ball at the Calvert Hall 25-yard line, but a holding call and then an interception by Cardinals defensive back Aiden O’Connell ended the threat.

Peter Lipscombe pushed the Gaels to a 24-0 lead with 7:10 left in the third quarter on a 27-yard field goal on his team’s opening drive of the half.  Most of that jaunt down the field was fueled by a 49-yard double pass from Kibby to Ronald Brown.

“Penalties, mistakes kill us,” Cardinals coach Josh Ward said. “We’re a young team, and we’re still making those mistakes. We have to correct them and (we will) see these guys in three weeks. They’re a good team.”