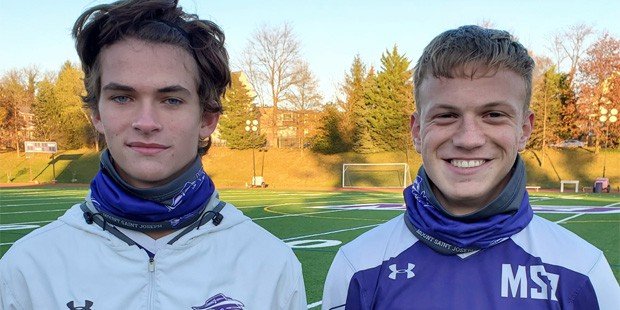 Two days after a stunning 7-0 road win at Archbishop Curley, undefeated Mount St. Joseph made it seven wins in a row to start the 2020 campaign, as the Gaels defeated visiting Calvert Hall, 4-1.

The victory completed a season sweep for the Cardinals as they now have complete control of first place in the Baltimore Catholic Soccer League. Calvert Hall entered the contest with just one loss, a 3-2 setback to the Gaels earlier this month, but they fell to 4-2 in the league and now trail the Gaels by nine points.

Van Danielson led the Mount with two pivotal goals on Wednesday.The senior captain, who is averaging a goal a game for coach Mike St. Martin, started the scoring just four minutes into the game.

Twenty minutes later, senior Alec Carey drilled one home from the right side to put the Gaels up 2-0.

The Cardinals cut the Mount lead to 2-1 on a 30-yard boot from sophomore Rich Monath, with 2:29 to go in the half, the first score against the stingy St.Joe defense in close to 200 minutes of play.

Both teams battled hard through the first 22 minutes of the second half, before Danielson stepped up again to give the Gaels a 3-1 cushion in the 22nd minute, and Brian St. Martin added a goal with 8:54 to go to seal the win.

Coach St. Martin said that his team possessed well, and that the things the team practiced during the week, especially getting diagonal balls to Danielson, keyed the victory.

“On defense, the only goal we gave up was a banger from 30 yards away,” said St. Martin.

Lam said, “It all started from the back, and our defense had a really solid game.”

The Gaels have surrendered just one goal in their last three games. They have outscored their opponents 16-1 during that stretch.

Danielson, who has five goals in the last two games, had kind words for Calvert Hall.

“They are a great team, they fight really hard and they stay competitive.”

Calvert Hall coach Rich Zinkand said, “We’re a young group and we will learn from this experience. We came at little tentative, but once we got through the first 15 minutes of the first half, we settled in and played pretty well. We hope we will see them again, and have another shot at them in the playoffs.”

Calvert Hall has three games remaining on its schedule, at Loyola next Wednesday, at Curley on Nov. 28 and at home against John Carroll, on Dec. 2. John Carroll, however, is in the midst of a COVID-19 shutdown which was scheduled to last through Thanksgiving, and that game is in doubt. The Cardinals will be looking to increase their three point lead over Curley for second place.

St. Joe will close its regular season with games against Loyola and Spalding.

Pictured above: Miles Lam (left) had two assists and Van Danielson scored a pair of goals as Mount St. Joseph improved to 7-0 with a 4-1 win over Calvert Hall.