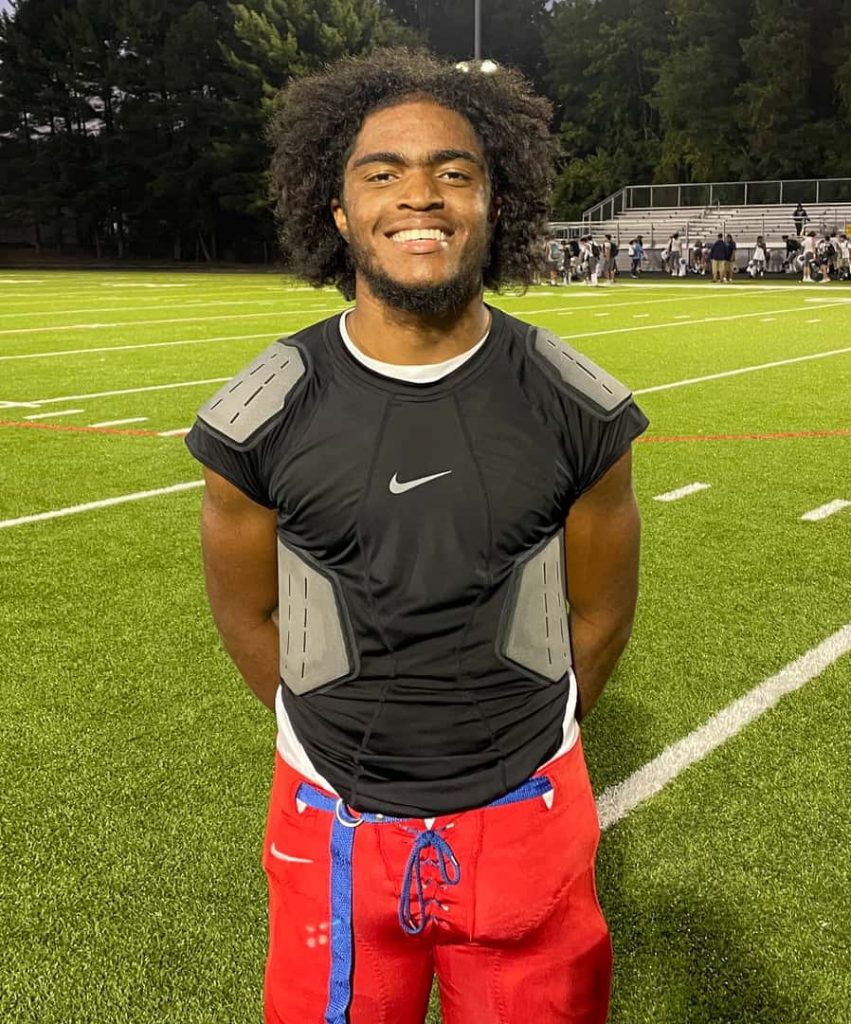 Christopher Booze had a sparkling 2021 debut for Old Mill football Friday. The senior running back scored two touchdowns as the 11th-ranked Patriots improved to 4-1 with a 32-0 victory over South River in Anne Arundel County.

Old Mill High first-year football coach Mike Pfisterer wants his team to have fun. The Patriots looked like they did Friday afternoon.

No. 11 Old Mill put together arguably its most complete performance of the season in a 32-0 victory over South River in an Anne Arundel County contest at Bob Golliday Memorial Field in Millersville.

They had explosive scoring. The defense stifled the Seahawks’ attack. Old Mill (4-1 overall, 4-0 Anne Arundel) blocked two punts and recovered a kickoff that bounced their way.

Whenever the Seahawks (3-2, 2-2 Anne Arundel) made a mistake Friday, the Patriots took advantage.

“The kids, we want them to have fun,” Pfisterer said.

The fun started early Friday for Old Mill. Within the first 35 seconds, Patriots quarterback Myles Fulton found receiver Donte Cargette-Drake down the field for a 57-yard catch and run.

The teams exchanged punts and turnovers on downs for the rest of the first quarter and most of the second, until Old Mill blocked a punt — its second of the game — and chipped its way down the field until Christopher Booze punched it in from a yard out.

Booze had not played yet this season, and the Patriots are glad to have him. He had a simple message after his second touchdown run, this one from 34 yards.

Booze didn’t play the first four weeks of the season, and was out for the Patriot’s spring season.

“I’ve been dreaming of this for four weeks, plus that,” Booze said. “It feels good to be back.”

Between Booze’s big return to the Patriots’ lineup, Fulton found his receivers on deep balls throughout the night. There was the early touchdown to Cargette-Drake. Fulton also connected with him on a 46-yard pass near the end of the first half.

Fulton also found Timothy Tripplett on a 32-yard pass in the third quarter.

“He’s a baller, he’s got a huge arm,” Pfisterer said. “He will definitely play at the next level.”

“You can’t make mistakes against a team like that,” Exlerben said. “They’re going to capitalize on everything.”

The Seahawks’ best scoring chance came in the fourth, reaching the red zone. The Patriots stood firm, however.

“We didn’t quit,” Exlerben  said. “Which is something I think our program is known for, that we’re not just going to lay down, which we didn’t. There’s too much football ahead of us, this is all growth.”

Old Mill is on the path that Exlerben hopes his South River team is on. The Patriots, whose only loss was at Fort Hill in a week two non-league game in Cumberland, have up just 10 points in four county games.

Booze had a simple message for how the Patriots have been performing.