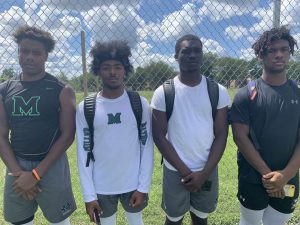 No. 7 Milford Mill, with Makai Booker (left), Rishon Holmes, Skylar Baker and Khalil Scott, open the season Friday against No. 19 New Town in a matchup of Baltimore County 2A Division rivals.

The area high school football campaign officially kicks off Friday with public programs starting play. Each of VSN’s preseason Top 20 teams will be in action including the renewal of one of the area’s most intense rivalries and No. 2 Mount St. Joseph playing arguably the state’s biggest match.

Below is the top five games of the weekend, followed by the complete area schedule.

What you need to know: After sharing the Baltimore County Division I title last year, Milford Mill gets the chance to grab the upper hand in the new county 2A Division. New Town reached the Class 2A state semifinals last year and looks to be the Millers’ biggest challenge come region playoffs in November.

What you need to know: This could be one of the more intriguing non-league matches of the weekend as both squads have offensive firepower. Both are likely to be Class 3A playoff participants come early November.

What you need to know: A pair of 2018 state region finalist squads kick off 2019 in Carroll County. The Owls (3A West finalist last year) expect to challenge for the Carroll league championship while South River returns a talent nucleus from last year’s run to the 4A East final.

What you need to know: After two easy road games, Mount St. Joseph opens its home schedule with one of the state’s best in Montgomery County’s Good Counsel, ranked No. 4 in the state media poll. The Falcons throttled St. Joe’s, 58-6, last season in a deluge. 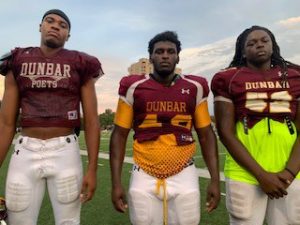 Joshua Carr (left), Deon Crews-Harris and John Thomas will lead eighth-ranked Dunbar against No. 9 Mervo in a battle of Top 10 teams Saturday night at Poly.

What you need to know: The road to the Baltimore City Division I league championship may be decided in week one. A huge crowd is expected for the showcase of a city league triple-header (Carver vs. Lake Clifton, 1 p.m., followed by Patterson vs. City) at Lumsden/Scott Stadium.

Atholton at No. 18 River Hill

Linganore at No. 17 Liberty

Marriotts Ridge at No. 14 Glenelg

North Point at No. 12 Arundel

No. 10 Broadneck at Potomac 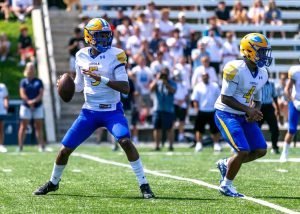 Jordan Moore (5) and Loyola look to start 2-0 when they host Georgetown Prep, ranked No. 8 in the state media poll, Friday afternoon in Towson.

No. 13 Dundalk at Century

Reservoir at No. 11 Howard 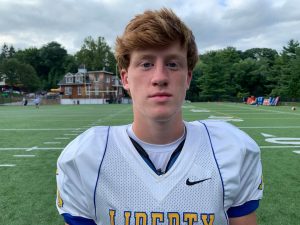 Patapsco vs. Western Tech at CCBC-Catonsville 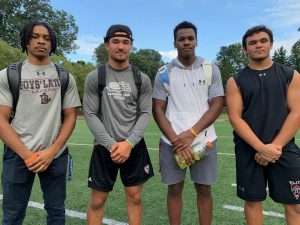 Lake Clifton vs. Carver at Poly

City vs. Patterson at Poly