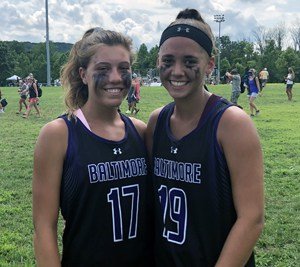 Regan Byrne (left) and Isabela Torres combined for five goals and an assist in leading the Baltimore Command Girls to a 14-7 win over the South in the championship game of the South Regional.

The Baltimore Command dominated both Washington and the South in pool play, on Thursday, in the All-America Underclassman South Regional Tournament at Meadowood Regional Park, defeating each teams twice to earn the top seed in Friday’s championship bracket. And when the South knocked off D.C. in Friday’s semifinal game, Baltimore was ready to register another rout in the final.

The Baltimore team, comprised of girls in the 2023 and 2024 classes, grabbed an early 1-0 lead, ran off six goals in a four minute stretch midway through the opening half, and led 9-0 before the South finally got on the scoreboard. Baltimore added two more goals before intermission to start a running clock.

Glenelg’s Isabella Torres, who was named the South Region MVP, and Glenelg Country’s Regan Byrne each scored twice in the first half surge. Torres later added an assist and Byrne finished with a hat-trick.

The Baltimore team’s ability to come together so quickly, despite just two practices, including one just prior to the first game, was amazing.

“It was definitely hard the first practice,” said Regan Byrne. “We had to get used to seeing each other and getting used to how we play with each other. Overall, I think we did really well for not ever playing together.”

According to Torres the opportunity to play with and against so much talent was special.

“The scores could have been a lot to a little, but the players we played against are insanely good, especially our team,” said Torres. “Everyone is so dispersed and we’re playing with people we usually play against, but it is so great to have so many good people on one team, and playing against of bunch of other really great players.”

The South opened the second half with a pair of scores by Emily Simkin to shutdown the running clock, but Baltimore countered with goals from Regan Byrne, Lauren Steer and Ellie White to engage it once again.

The South played much of the final seven minutes with a man-up and scored the final four goals of the day to make things respectable. In addition to Torres, White also made the All-Regional team, along with Caelan Jones and Hailey Simpson from Washington and Taylor Lapointe and Anne Edens from the South.

Baltimore was led by a trio of top flight coaches which included Mary Gagnon of St. Paul’s School for Girls, Mac Ford of Notre Dame Prep and John Brown from Westminster.

“Not a lot of time to prepare,” said Ford. “The girls just came together very, very quickly. We probably got it right. There were a lot of girls we had to choose from and we got lucky. We got a great group.”

Gagnon discussed how special it was just to be playing in the year 2020, when so many events have been stopped by the Covid-19 pandemic.

“If anybody had told me we were going to be here, I probably wouldn’t have believed it,” said Gagnon. “We are just fortunate that Corrigan (Sports), and Maryland, hosted it and let the kids be kids. It’s healthy for them to play.”

“We were so talented,” added Brown. “We were so blessed to have that much talent and they just came together really well.”

The Baltimore Command will now await the completion of the other regionals and the scheduling of the tournament finals, which is expected to be played in October.