From nothing to history for Concordia Prep 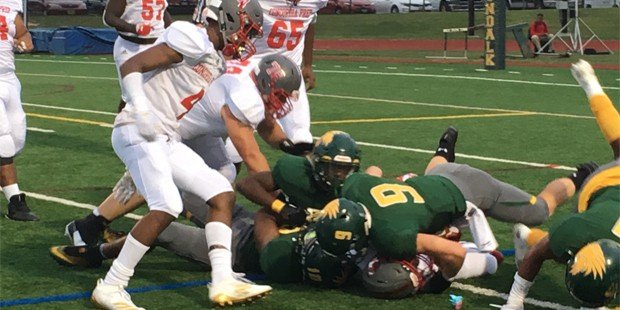 Concordia Prep had its way with Dundalk Friday evening, improving to 3-0. The win has propelled the Saints to its first VSN Top 20 ranking.

Three years ago, Concordia Prep football was non-existent…figuratively and literally. Now, the Saints have a place among the area’s best.

The Saints are 14th in the new VSN Top 20 poll – a first for the Towson school. Concordia Prep shutout then-No. 12 Dundalk last weekend

Concordia didn’t field a team in 2016 after its 2015 campaign was cancelled with two games left because it didn’t have enough players. The Saints returned to the field in 2017 (played independent schedule), and last season, reached the MIAA C Conference title game.

In the B Conference this season, Concordia Prep is off to a 2-0 start in league. The Saints play Severn School this weekend.

Despite failing in its bid to capture the nation’s No. 1 ranking (MaxPreps), St. Frances Academy is still No. 1 in VSN’s local poll, followed by Mount St. Joseph, Calvert Hall College, Archbishop Spalding and McDonogh School. Franklin, Milford Mill Academy, Mervo, Dunbar and Loyola Blakefield round out the Top 10.

South River (No. 20) is also new to the poll. After reaching the 4A East Region final last season, the Seahawks are 2-0 with a road win at Westminster and decision over Meade last weekend in their Anne Arundel County season debut.

This week: at Bullis School, Sept. 20

This week: at Severn School, Sept. 20