Frisvold sisters give No. 3 Reservoir the edge against Howard 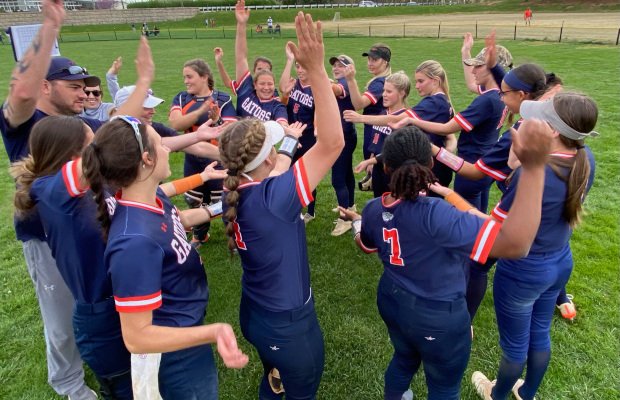 In a matchup between two of Howard County’s top pitchers Friday afternoon, scoring opportunities proved to be few and far between for Reservoir and Howard. 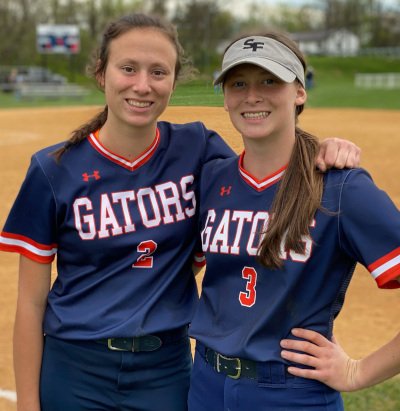 Maggie Frisvold (left) hurled a three-hit shutout and scored the game’s only run, in the fourth inning, after tripling and being plated on a double by her sister Abbie (right).

So, locked in a scoreless game in the fourth inning, Reservoir pitcher Maggie Frisvold decided to take things into her own hands.

Frisvold kicked off the fourth frame against Howard ace Maddie Coleman with a triple to right and then eventually came in to score on a double by sister Abbie for what turned out to be the only run in a 1-0 Gators’ road victory.

“[Maddie is] a great pitcher with great stuff, but as a team we knew we just needed to attack and stay focused throughout the game. For me, it was just control what we can control,” Maggie Frisvold said. “[On that hit] I was just trying to crowd the plate and be aggressive and just take advantage of whatever pitch I got. I felt like if we could score first, we would be in a good spot.”

“These are the teams that we want to see and the games we want to play. These tight, competitive games are what make us better,” Reservoir coach Julie Frisvold said. “Today gave our girls a chance to see what it feels like to play under pressure and I thought we handled those moments extremely well.”

While Howard fell a run short, Coleman certainly did her part to keep the game tight. The senior pitcher struck out 12 batters, scattered six hits and allowed just the one run.

Howard had chances to tie the score as the game wore on, putting two runners on in the bottom of the fourth and getting the leadoff batter on in the sixth. However, Frisvold and the rest of the Gators’ defense delivered every time they were called upon.

“These kind of games come down to one or two plays … whichever team can get that big hit when the opportunity presents itself. You could see it pretty early, this was one of those games where one run is likely going to be enough,” Howard coach Chuck Rice said. “So you have to tip your hat to them. I was hoping we could steal this one and force them to chase us [in the standings], but in reality they are looking like the cream of the county this year and they earned the win today.”

Coleman set the tone right away for Howard by striking out the side in the top of the first inning. Frisvold answered with a 1-2-3 bottom half of the frame and the stage was set for an old-fashioned pitcher’s duel.

Neither team managed a hit through the first three innings.

That all changed in the top of the fourth, though. Coach Julie Frisvold credited her girls for switching up their approach the second time through the lineup.

“I thought we really did make some good adjustments as the game went on. We found different ways to get on base, including a couple good bunts at the end, to put ourselves in position to score,” Julie Frisvold said. “Ultimately, though, it comes down to just getting that one or two timely hits and we fortunately got that today.” 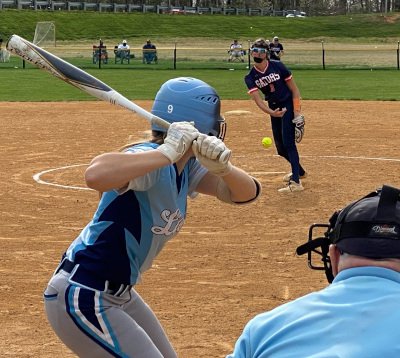 Maggie Frisvold’s one-out triple was Reservoir’s first hit of the game. Then, one batter later, Abbie — a freshman — delivered arguably the biggest hit of her varsity career to date.

“My mentality was really to just try and hit it to the right side to give her the best chance to score,” she said. “I actually didn’t feel too much pressure because I had faith that even if I hadn’t got a hit there, one of my teammates would have picked me up. So I just focused on doing the best I could.”

The Gators best chance to add insurance runs came in the top of the fifth when Madison Granzow hit a two-out single and Ecker followed with a ground-rule double. Courtney Johnson then launched a deep fly to center that was caught at the fence to end the inning.

In the bottom of the fourth, Delossantos and Gross each had singles to put two runners on with just one out. But a clutch pickoff throw by Reservoir catcher Ecker and a Frisvold strike out thwarted that scoring chance.

Big catches in the outfield, including a snag by right fielder Clare Andrews for the game-clinching out in the bottom of the seventh, all kept Howard runners off base in the later innings.

“Clare did a phenomenal job — people don’t give enough credit to how hard it is to read a slicing ball in right field. She puts herself in the best possible positions and I appreciate the effort that she gives,” Julie Frisvold said. “But we got lots of big plays. Getting the lead runner in that [fourth] inning was big too and when [Howard] did get hits, we kept the ball in front of us. All of those little things are what wins games.”

Reservoir and Howard will see one another in a rematch at Reservoir next Wednesday.