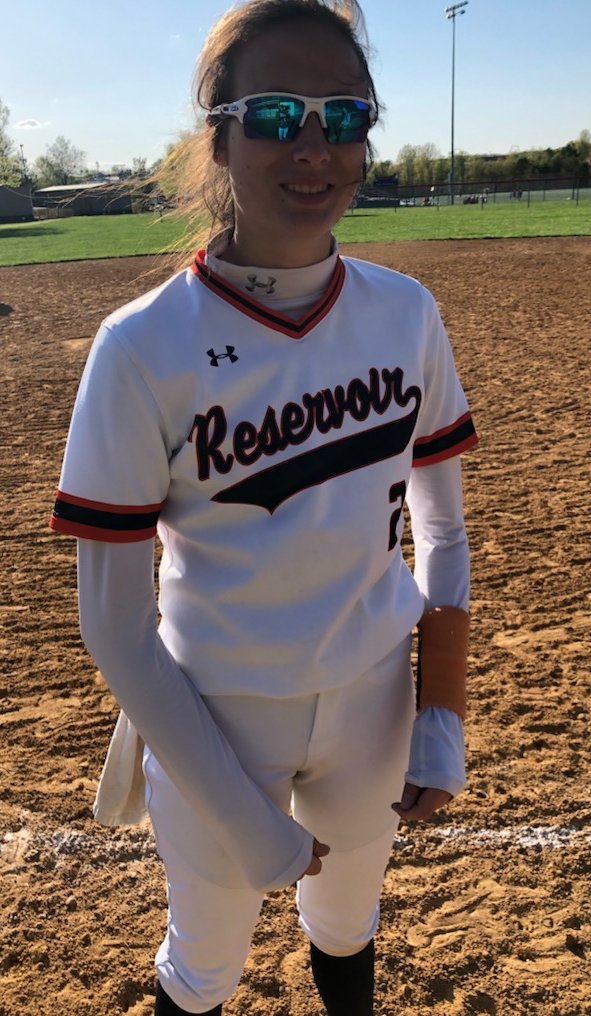 Maggie Frisvold’s cunning on the mound helped keep Reservoir undefeated Wednesday afternoon. The senior pitcher worked out of several jams and also had two hits as the No. 3 Gators improved to 12-0 with a 3-2 victory in a Howard County softball contest in Fulton.

Reservoir High’s softball field does not house a public address system. But during a few innings of the Gators’ contest with visiting Howard Wednesday afternoon, it would be understandable if the partisan spectators in attendance could hear Molly Hatchet’s hit “Flirtin’ with Disaster” mixed in with the heavy gusts of winds.

“Maggie, she is very poised on the mound,” Gators coach Dave Burke said. “She never lets her emotions get the best of her. She’s all business when she’s out there, and it’s gotten us out of tight jams as you saw today and in previous games as well.”

Frisvold and Company worked out of their first jam in the third inning with Reservoir clinging to a 2-1 lead. That’s when Frisvold stabbed at and caught a line drive up the middle off the bat of Howard’s Morgan Gross with two on and two out.

Frisvold said the grab was just a quick reaction she had on the ball that was destined to find the outfield grass.

The Gators answered Howard’s run with one of their own in the bottom of the third inning as Kayla Ecker doubled to right field and her courtesy runner, Mia McGrath, later scored on a groundout to first by Abbie Frisvold for a 3-1 lead.

Three innings later, Maggie Frisvold performed another rendition of Houdini’s escape act to bring to a close Howard’s next potential rally as she struck out back-to-back batters on six straight pitches with the bases loaded and Reservoir holding a 3-2 advantage.

“I was just trying to stay focused on each pitch and doing the best I can to stay on top of the batter and ultimately, be able to get her (out),” said Maggie Frisvold, who went 2 for 3 with a run at the plate. “I love these games. They’re so exciting. I just love playing the great competition, and I’m excited about playing more games like this.”

The Lions (8-2, 7-2 Howard) saw the first five batters of the top of the sixth inning reach base with the only out during that time coming on a fielder’s choice. Katie Green capped that rally with a run-scoring single up the middle to score Maddie Coleman and close the deficit to a run.

Frisvold, who had nine strikeouts for the game, then abruptly halted Howard’s hopes for more runs with the 1-2-3 strikeouts of Nicole Parker and Clara O’Connor.

In the seventh inning, Frisvold’s 11th victory on the mound was aided greatly by some stellar and timely defense. Lily Soler lined a ball down the right field line to open the top of the inning only to see Clare Andrews lay out near foul territory for the catch.

Erin Gorschboth (2 for 4, run) reached base on a single to center field, but was forced out at second during the next at-bat on a flyball that was initially misplayed in center field. The ball was then scooped up and tossed to second base for the second out of the inning.

Frisvold struck out Coleman looking to end the contest.

“(Frisvold) does, I do, all the coaches do have absolute faith in everybody out there that they’ll make a play when they need to make a play,” Burke said. “If she doesn’t feel she can pitch around someone, she can pitch to them, and the defense does the work for her.”

Reservoir scored the first run of the game in the bottom of the first on a single, sacrifice bunt, and a throwing error that brought home Maggie Frisvold. That lead was doubled in the inning when Courtney Johnson scored on a passed ball during a walk drawn by Clare Andrews.

Coleman cut that 2-0 deficit in half in the top of the third inning on a run-scoring to right field before Frisvold made her quick reaction grab to neutralize the threat.

Coleman struck out five and scattered four hits on the mound for the Lions, who dropped a 1-0 decision to Reservoir in Ellicott City last Friday.

“I know if it was that (a lack of timely hitting) or the first two innings our defense was so tight,” Howard coach Chuck Rice said. “We didn’t make the plays defensively. I believe we hit the ball as well as we’re going to hit it (but) you’re right, timely hitting is always going to win games. Opportunities were squandered a little bit, maybe. They made some really good plays. Maggie made that play up the middle and the girl made that play in right field.”