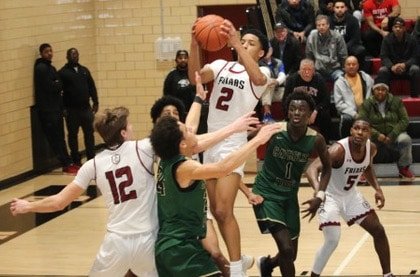 Curley maintains a one-game lead with one to play and has clinched a bye; MIAA B Conference playoff scenarios

Archbishop Curley has led the MIAA B Conference basketball standings from wire-to-wire this winter, but a pair of late season losses have left the Friars with some work to do to clinch the top spot, while St. John’s Catholic Prep remains in contention for that position and third place Friends still has a shot to move up to second.

Curley can clinch the top spot with a win in its regular season finale on Friday at Chapelgate Christian, but should it falter, SJCP can forge a tie with a win at Friends (16-9, 9-4) in the most pivotal game of the regular season’s final day. If Curley and St. John’s tie for first, neither club would have a tie-break advantage and the top seed would be determined by a coin flip.

Curley could also clinch first place, regardless of what it does at Chapelgate, should St. John’s lose at Friends. A win by the Quakers would leave them tied for second with St. John’s and Friends would take the tie-break by virtue of a season sweep of the Vikings.

Friends can finish no lower than the third seed, even though Chapelgate Christian (14-6, 8-5) could gain a tie in the standings with an upset of Curley and a Friends loss to St. John’s. The Quakers ended their chances of winning the top seed with a 49-43 loss to Indian Creek on Wednesday.

Despite its loss to St. John’s, Severn (9-15, 6-7) is locked in as the fifth seed. The Admirals close their regular season on Friday at home against Indian Creek (8-13 overall, 4-9), which also clinched a playoff spot on Wednesday.

The Eagles’ upset of Friends, combined with St. Mary’s (9-16, 3-10) home loss to Chapelgate Christian, on Wednesday, locked up the sixth and final spot for Indian Creek. ICS leads St. Mary’s by one game in the standings and the two teams split their regular season meetings, but even if ICS falls in its regular season finale, Friday at Severn, and St. Mary’s wins on Friday at St. Paul’s, Indian Creek has the tie-break by virtue of its win over Friends or an earlier win over St. John’s Catholic Prep. The Saints have no wins over the top three teams in the conference.

When the dust settles on Friday, next Tuesday’s quarterfinals will be set. The third seed will host the sixth seed and the fifth seed will visit the fourth seed. The 4/5 winner will travel to the #1 seed on Thursday and the 3/6 winner will challenge the #2 seed, also on Thursday. The MIAA B Conference Championship Game will be on Sunday, Feb. 23rd at Harford Community College’s Aberdeen Proving Grounds Federal Credit Union Arena.

Curley maintains a one-game lead with one to play and has clinched a bye; MIAA B Conference playoff scenarios