Friars go wire-to-wire for the upset 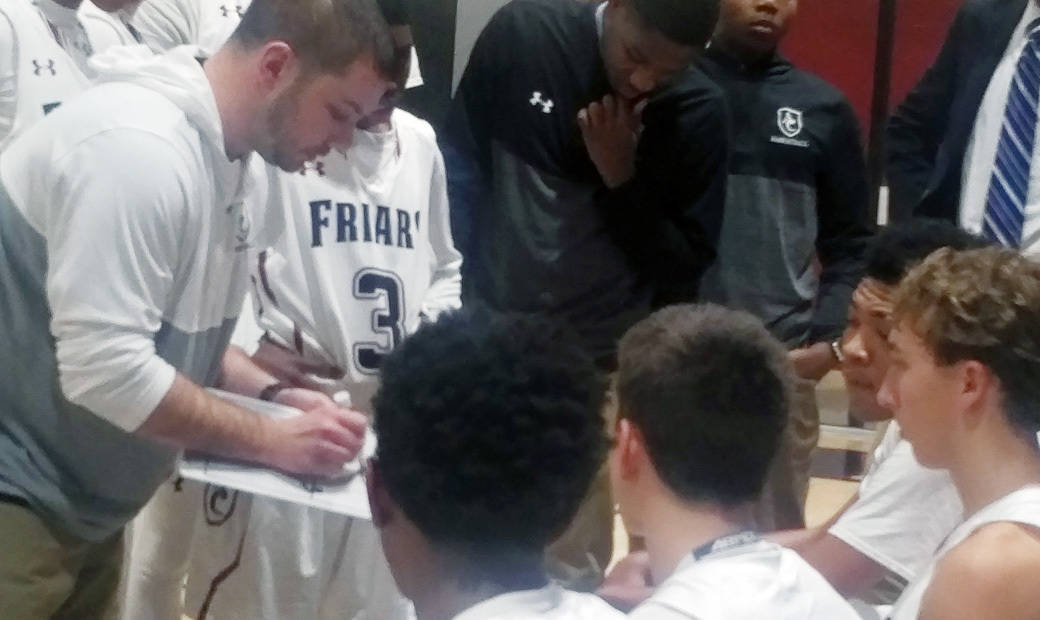 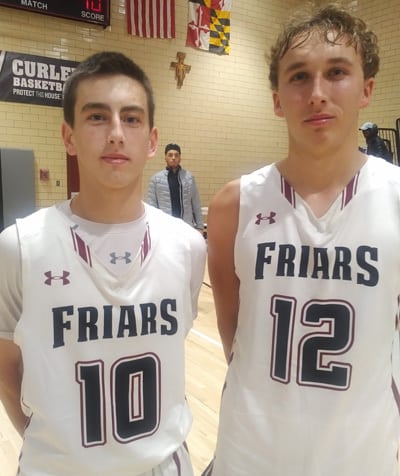 Brandon Knapp (left) and Will Draper, a pair of Curley soccer standouts who also shine on the hardwood, combined for 31 points to lead the Friars over St. Paul’s.

Archbishop Curley scored eight unanswered points to start the game and the Friars zoomed out to a 16-2 lead with 2 minutes to go in the first quarter, as they jump-started what would be an exciting 73-67 wire-to-wire victory over defending MIAA B Conference basketball champion St. Pauls, Wednesday night in East Baltimore.

Curley’s second-year coach Phil Hahn had five players in double figures led by senior captain Brandon Knapp with 17 and senior captain Will Draper with 14. Brandon Medley-Bacon had 11 points, while Travis
Dobins and Dinari Boykin each added 10.

Draper, who also plays for Curley’s soccer team, canned a huge 3-pointer with 1:17 to go in regulation to give his team a 65-58 lead, and he converted two free throws with 18 seconds left to help the Friars (6-6 overall, 1-2 MIAA B) maintain their lead over a St. Paul’s squad that simply wouldn’t quit.

It was a typical comeback effort throughout the night from coach Seth Goldberg’s Crusaders who always play hard for all 32 minutes.

Despite his heroics on offense, Draper said that it was the Friars defense that made the difference in the game.

‘St Paul’s played great,” said Draper. “I thought they were going to come back but we were able to hold them off. Our defense translated into offense tonight.”

Knapp, an All-Metro soccer pick who play soccer for St. John’s University next year, agreed. “We played as a team defensively. They have a couple of great players that we focused our scheme around.”

Knapp nailed two free throws with four seconds left in regulation to seal the win. The sharp-shooting senior had four 3’s on the night and was five for six from the free throw line.

The Crusaders (8-6 overall, 1-2 MIAA B) got 10 points in the fourth quarter from senior Trayon Wright who helped cut the Curley lead to three twice in the last 40 seconds of the game, but it just wasn’t enough.

Wright finished the night with 16 points.

Junior Siegfried “Ziggy” Reid scored 18 of his game leading 20 points in the second half to help keep Goldberg’s team in the game. Reid nailed three 3’s on the night, and he was 3-for-3 from the free throw line.

Troy Barthelme tossed in 14 points for the Crusaders and A. J. Sawyers added 10.

The Friars got big contributions from freshman Dinari Boykin and Hasson Massenburg, who picked up the slack when 6-foot-10 center Brandon Medley-Bacon got in foul trouble.

Losing “Bacon” for most of of the first half after he caught his second foul late in the first quarter, and again in the third quarter when he was whistled for his third foul at the 6:46 mark, forced Hahn to go to his freshman who stepped up big.

“We count on ‘Bacon’ to be our defensive anchor and it helps to have him in the middle because of his ability to alter shots,” said Hahn. “On the offensive end, he’s obviously one of our major weapons because of his scoring ability, but he is also a great passer.”

The contributions from Boykin and Massenburg were especially important because they were both coming off of early-season injuries.”

Curley held a 33-21 lead at the half, and Hahn told his players during intermission to be prepared for the Crusaders to make a run. “We stayed aggressive against their zone, and got big contributions from our bench,” added Hahn.

Draper concluded that the win will help push the Friars forward. “We we really needed this win because it helped us bounce back after our first two losses.”