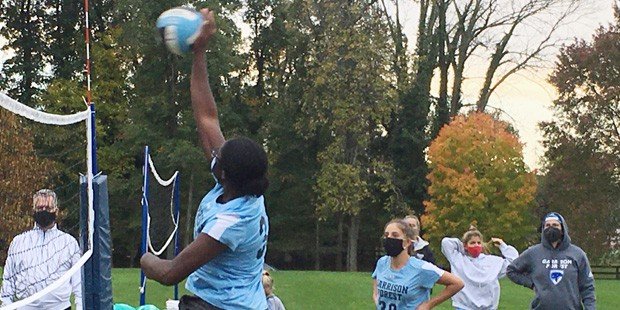 With a concession to the Covid-19 pandemic in mind, the Garrison Forest School and Gerstell Academy volleyball squads gave new meaning to being outside hitters when the teams clashed in Owings Mills on Tuesday afternoon. 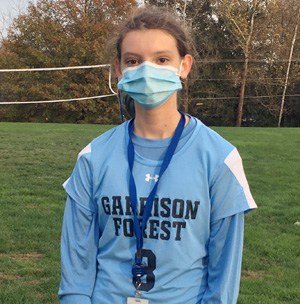 Garrison Forest freshman setter Katie Birrane had 13 aces and was on the service line for 19 of the Grizzlies’ first 20 points in a 25-8 victory in the second game of a 3-1 triumph over Gerstell Academy on Tuesday afternoon in the season opening match for both schools.

All regular rules were enforced, including changing sides after each set, in the contest that was governed by officials just as if it was held inside.

Garrison Forest is slated to finish its abbreviated season Wednesday afternoon at the same site against Chapelgate Christian Academy while Gerstell has five more matches remaining, beginning with an indoor tussle against Our Lady of Mount Carmel on Friday in Finksburg.

Tuesday’s match was an indication of how well the Interscholastic Athletic Association of Maryland schools guidelines have been accepted, in that the IAAM has decided that an “open-season approach” works best for member schools at this time, per a statement released by the league three weeks ago that read:

“The leagues will not provide official league schedules, but will provide member schools the opportunity to create student-athlete involvement and competition within the comfort level determined by each school. The type and amount of activities made available will be at the discretion of each school.”

To that end, Garrison Forest administrators and coaches opted for limited schedules in most sports — and two outdoor matches for the volleyball team.

Both squads had quirky practice schedules — the Grizzlies practiced in a downpour and the Falcons were limited by student attendance every other week — that didn’t give the teams much preparation time.

“It was interesting,” said Garrison Forest coach Jen Hampton, who played the sport at LSU. “We just had to change plans for what we wanted to do, so we couldn’t do a lot of hitting and we worked on our passing. The girls were just having a lot of fun with it, but I wouldn’t make them do that again.” 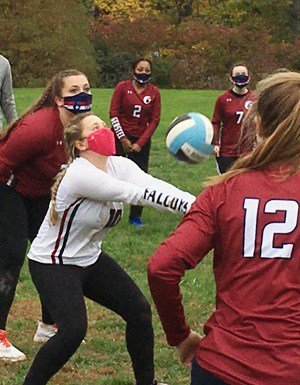 Gerstell Academy libero Sophia DiMaggio sets for either Delaney Maul (behind) or Keeley Ballard in the Falcons’ 3-1 setback at Garrison Forest on Tuesday afternoon in Owings Mills.

Gerstell coach Eric Zak said that because the freshmen and sophomores attend school in-person one week and juniors and seniors the next, his 90-minute practices sessions twice a week were hampered by having less than a full complement of players on hand.

His biggest surprise was “that we didn’t get any rotation penalties,” in Tuesday’s match. “We did a great job on that. I thought we hustled and the effort was great. The things we need to work on are our defensive base and offensive transitioning.”

He added that “giving the kids some sense of normalcy” was part and parcel of why he is happy to teach them about the sport.

The Falcons started off on the right foot, getting good work on the service line from Simone Hammond and Delaney Maul to earn a 25-23 verdict in the opening set.

However, some superb serving by Garrison Forest freshman Katie Birrane, who had 13 aces in that set alone, set the tone for the Grizzlies to even the count after a 25-8 win in the second set.

“I was trying to look for a weak spot in their defense,” Birrane said. “And then I tried to switch it up and be a little unpredictable.”

The rookie setter also started the third set with an ace and Garrison Forest was off and winging again as it built a 10-2 advantage before Gerstell went on a 9-1 run to deadlock the score at 11-all.

A couple of aces by senior Charlotte Edmunds, a kill by senior Nyla Holley and an ace by freshman Alexandra Gottlieb helped the hosts to sprint ahead again and eventually take the third set, 25-19.

The score see-sawed in the fourth set until another Birrane ace snapped an 11-11 tie before senior middle hitter Rashiya Howell’s kill and two more Birrane aces widened the gap in what would become a 25-17 Grizzlie triumph.

Hampton said that the way Gottlieb achieved personal milestones in the match stood out for Garrison Forest.

“We celebrate those things,” the coach said. “No matter how small they are.”

Zak said that the outcome came down to whichever team served the best.

For his team that will play the rest of its schedule inside, it made things a little more difficult.

“They really had no point of reference,” he said. “And then there’s depth perception, wind and the elements. But really, the girls were just excited to play.”

He also pointed out how much libero Sophia DiMaggio meant to his team.

“She helped by not just touching the ball, but by helping the other girls get to the right spot,” Zak said.