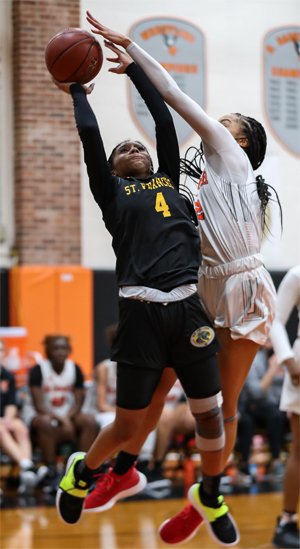 Evie Freeman’s varsity career for Bryn Mawr School’s field hockey team has been snake bitten. As a sophomore in 2007, the Mawrians were upset in the IAAM A semifinals. Last fall, Bryn Mawr failed to reach the semifinal round as it was a stunned quarterfinal victim.

But the one thing that has frustrated Freeman the last several years is not getting a win over Garrison Forest School. With a short swing of her stick Sunday afternoon, all those disappointments became a distant memory.

Freeman’s score off a penalty corner in the second overtime lifted the Mawrians to a 2-1 victory over the Grizzlies for the A title at Goucher College’s Beldon Field. For the first time since 2006, the league’s championship glass bowl will reside on Northern Parkway.

Freeman tapped a shot from Molly Danko that went just over the right shoulder of Grizzlies goalie Emily Cain for the game winner. The Mawrians had gone winless in six tries against their Owings Mills rivals since the 2006 title game, including a 0-0 tie and 3-2 overtime loss during the regular season.

“We’ve never been more ready for a game,” said Freeman. “We were down 2-0 the last time and we came back, but in overtime we lost our focus and they scored on us right away. We knew we had to take it a step deeper.”

Budzik was confident when she sent Freeman, Hemmendinger, Danko, Hannah Park, Dorothy Kim and Lili Turner to the field for the six-on-six second overtime.

“I asked before she went in ‘can you do this,’” Budzik said. “She just looked at me, smiled and said yes. I knew she was going to do what she could to get it in.”

Seeking to become the first team to win at least three straight league titles since Glenelg Country School’s run of four B crowns from 2000 to 2003, Garrison Forest, the area’s No. 1 squad, had the upper hand on penalty corners in the first half.

Blue, arguably the league’s premier player, took the entry pass, weaved a few yards in and pushed the ball to the left post where Magness knocked it past Bryn Mawr goalie Taylor Sorensen with under two minutes remaining in the first half.

The Mawrians didn’t get their first penalty corner until 10 minutes left in the game, but they made it count. Hemmedinger, a senior midfielder, sent the entry pass to Creaghan Peters, who stopped the ball and Johnson fired a shot past Cain into the left corner.

Garrison Forest had three more penalty corners the remainder of the regulation, and had the better of the play in the first overtime, to no avail. In the end, it was Bryn Mawr finally capturing the championship glass bowl and Freeman capping her varsity career on the ultimate high note.

“It’s been our dream since I’ve been on this team, we haven’t beaten them since the championship three years ago,” said Freeman, who broke her thumb in Thursday’s semifinals. “It’s always on our minds, always in the back of our heads. We’ve been trying to get here and finally, after three years, it feels so good.”