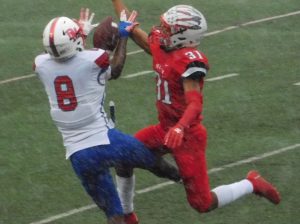 DeMatha wideout Edward Core (8) is unable to make the catch with Franklin’s Xavier Cokley defending during the first half of Saturday’s non-league football match. The No. 15 Indians scored first, but the Prince George’s County private school gradually gain control to collect a 27-14 decision in Baltimore County.

When Robert Garrett scored a defensive touchdown in the opening quarter of Franklin’s football contest with DeMatha Catholic Saturday afternoon, thoughts of a massive upset danced through the minds of the Indians’ rain soaked faithful.

It didn’t last long. The Stags from Prince George’s County posted a 27-14 victory over 15th-ranked Franklin at McWilliams Stadium in Reisterstown.

Da’Jon Butler and Sieh Bangura each scored a rushing touchdown for DeMatha (2-1 overall), and Jermaine Johnson returned a kickoff 89 yards for another score. Garrett and senior Elijah Solomon each had fumble returns for a touchdown for Franklin (1-1).

“If you’re looking for small victories, they showed they can play with anybody,” said Franklin coach Anthony Burgos. “They gave 100-percent effort for four quarters.”

The Indians struck first as Garrett, a senior defensive line, knocked the ball from DeMatha quarterback Eric Najarian, picked it up and ran 40 yards into the end zone with 5 minutes, 13 seconds left in the opening quarter.

The lead lasted just 16 seconds as Johnson returned the ensuing kickoff 89 yards to pull DeMatha even. Harold Peters perfectly read a Franklin pass play, intercepting the ball and going untouched 79 yards for a touchdown, putting the Stags ahead with 1:38 left in the first.

The Indians were denied on a fake punt attempt on 4th-and-1, giving DeMatha possession in their territory. Butler scored from seven yards, extending the Stags’ lead to 20-7 with 8:51 remaining before halftime.

Bangura (85 yards) scored from three yards out, putting DeMatha up 27-7. Solomon, who is committed to Villanova University, returned a fumble 25 yards for Franklin’s other score.