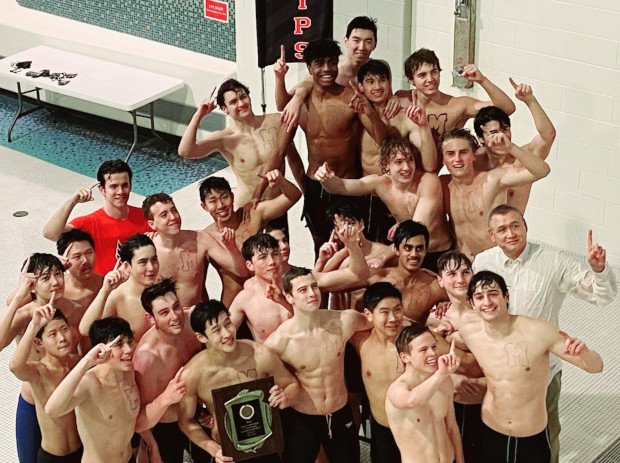 Unperturbed by a 93-77 loss to Loyola Blakefield in a dual meet just two weeks ago, McDonogh rose to the occasion in the MIAA A Conference championship meet on Saturday at Loyola University Maryland’s Mangione Aquatic Center.

The Eagles (539.5 points) prevailed over the runner-up Dons (488) to claim their fourth consecutive title and sixth overall crown.

Coach Scott Ward said that winning dual meets is a priority for the Eagles (5-1), despite falling to the Dons (5-0) in January.

“We always try to put out our best lineup,” Ward said. “We swim to win, and we talk about swimming hard through the season. We try not to go crazy (training hard) before meets. But we always seem to get up more for the championships.”

McDonogh continues to be a thorn in the side of Loyola’s dynasty, snapping the Dons’ 10-year reign in 2006 before landing in the middle of two of Loyola’s five-year runs from 2007-2017.

The Eagles finally earned back-to-back banners in 2018 and 2019 and then produced a three-peat in the last championship meet prior to the pandemic.

Saturday night’s win was fueled by an outstanding performance across the board, especially by Alan Cherches.

Churches said that he is proud of his accomplishments after a terrific debut as a freshman on the 2019 championship squad and then a so-so sophomore campaign on another title-winning group.

“I wasn’t improving the way I wanted to do,” the University of Pennsylvania commit said.

Switching to Ward’s Eagle Swim Team as a junior made for better results, Cherches added.

“I never imagined I’d be able to hit some times that I’ve been able to hit,” he said after setting two school and MIAA records while reaching All-American standards in all four of his races.

The Eagle standout then topped off the meet by anchoring the 400 freestyle relay (3:05.85) with senior Nathan Pittroff, junior Drew Greene and Bowers to beat Loyola’s Ryan Branon, Clancy and freshmen Harry Belbot and Alexander Dillon (3:07.59).

“We talked about having safe starts and then swimming hard once we were in the water,” Cherches said. “It was a great way to finish the meet.”

“We were nervous about the 500,” Cherches said. “Loyola has some really fast guys, so I have to give a shoutout to Stuart for coming in fourth. That was a very key race.”

As is often the case, depth matters in championship swimming, and the Eagles’ provided enough of it to emerge with the victory.

“Being healthy for the meet was big for us,” Ward said. “I think everybody else was healthy, too, but you never know when somebody is recovering from COVID (and not in top form.)”