Four years in the making 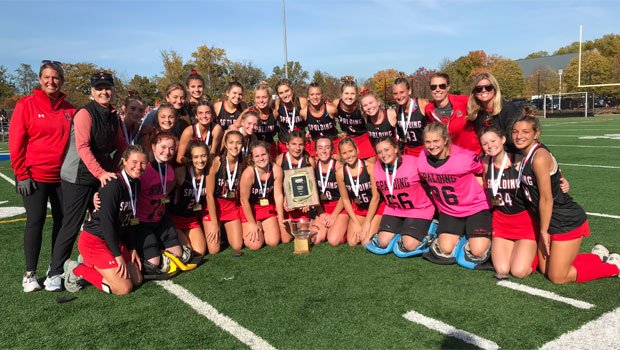 Inspired by missed opportunities in past championship runs, Archbishop Spalding blanks No. 1 Garrison Forest for IAAM A field hockey title

Archbishop Spalding goalie Ruby DeFrees had a lot to think about Saturday morning before she could even consider the IAAM A Conference field hockey championship in the afternoon.

Archbishop Spalding goalie Ruby DeFrees listens to the halftime huddle chat along with teammate Avery Ruckman (43) during the IAAM A Conference championship game in which she made 10 saves and played “the game of her life,” according to coach Leslee Brady. DeFrees posted her 10th shutout of the season in the 3-0 win.

DeFrees woke up at 7 a.m. to take the SAT at 8:30. An essay component lengthened the test, delaying the junior even more than expected. Arriving during warmups, she liked what she saw from the No. 2 Cavaliers as they prepared to face No. 1 Garrison Forest, the only team they had lost to all season and the team that beat them in the 2019 A Conference final.

DeFrees certainly had no trouble focusing once she had the pads on. Cavaliers coach Leslee Brady said she played “the game of her life” with 10 saves to shut out the top-seeded Grizzlies, 3-0, at St. Mary’s Pascal Field in Annapolis.

The Grizzlies had averaged 4.1 goals against A Conference opponents, but DeFrees and defenders Becca Lawn, Katie Fichtner, Bella Saviano and Jilly Lawn were determined to stifle that offense. DeFrees backed them up with several spectacular saves and a few back-to-back stops as the Cavaliers held Garrison Forest (14-6) scoreless for only the third time this fall.

“I just think we have such trust,” DeFrees said of the defensive unit. “We have confidence in each other and we just get things done.”

Despite playing with a young defense most of the season, the Grizzlies allowed just 10 goals this fall and shut out all three of their playoff opponents, including a surging No. 5 McDonogh team, 2-0, in the semifinals. They finished with six straight shutouts.

Although the Cavaliers already had plenty of motivation, senior Becca Lawn said they gained an unexpected last-minute boost to use against the Grizzlies, ranked No. 24 in MAX Field Hockey’s national Top 25.

In the regular-season meeting, the Grizzlies got the jump on Spalding, but the Cavaliers turned that around Saturday.

Archbishop Spalding coach Leslee Brady congratulates her team on winning the IAAM A Conference championship. In a season that included Brady’s 300th career win, the Cavaliers celebrated their third title since 2013.

Bridget Donovan scored less than five minutes into the game on a penalty corner, taking a pass from Becca Lawn near the stroke line, spinning and firing the ball to the backboard.

“We talked about getting off to a fast start,” Brady said. “That’s what happened when we played [Garrison] in season. We gave them a goal early on and it’s hard to play at this level from behind, so we knew that first goal was key. Then we pumped that second one in and the girls just never let up.”

The Cavaliers made it 2-0 with 8:40 left in the first half on Carys Donahoe’s goal. Donovan started the play with a pass from the baseline toward the stroke line, but it deflected off a defender’s foot and rolled behind Garrison goalie Alyssa Klebasko toward Donohoe for the punch in by the far post.

Ally Keith all but sealed the victory with 4:13 left in the game when she drove home the third shot in a series after Klebasko saved the first two.

Fichtner said the Cavaliers made some adjustments from the first game, a 3-1 loss to Garrison on Oct. 7. In seven games since then, they’ve allowed only two goals.

“I think they have a lot of really good players, Dani Mendez especially,” Fichtner said. “We tried to shut her off last game and we had a game plan that I don’t think was the best, and then today, we were like, ‘All right, we’re just going to play our hockey against their hockey. The best athletes will win.’”

Garrison Forest sophomore Morgan Qualls plays a ball near the sideline in the second half of the IAAM A Conference championship. The Grizzlies won every A Conference regular season game this fall but fell short in the title game to Archbishop Spalding.

For much of the game, the Grizzlies seemed a step behind although they had their share of possession and outshot the Cavaliers, 11-6.

“Anything 50-50, I think they got to it before us,” Garrison Forest coach Malcolm Belin said. “Not all over the field, but they outworked us in a lot of situations and that makes it tough to win. Obviously they have a great team and they definitely earned their win today, so nothing but congrats to them.”

While the Grizzlies will graduate four players — Mendez and defenders Cameron Medinger, Catherine McAllister and Anne McAllister — the Cavaliers will say goodbye to a dozen players, including captains Lawn, Donovan and Fichtner.

For now, however, the Cavaliers’ seniors will hold on tight to the championship trophy it took them four years to earn.

“There’s no better feeling in the world,” Donovan said. “We just wanted this so bad… We played this whole season and we worked so hard and I know we deserve this, but it’s just crazy that it’s actually happening.”

Pictured above: Archbishop Spalding’s No. 2 field hockey team won the IAAM A Conference championship for the first time in six years with a 3-0 victory over No. 1 Garrison Forest Saturday. In the middle of the front row, Becca Lawn holds onto the championship plaque flanked by fellow senior captains Katie Fichtner on the left and Bridget Donovan on the right.