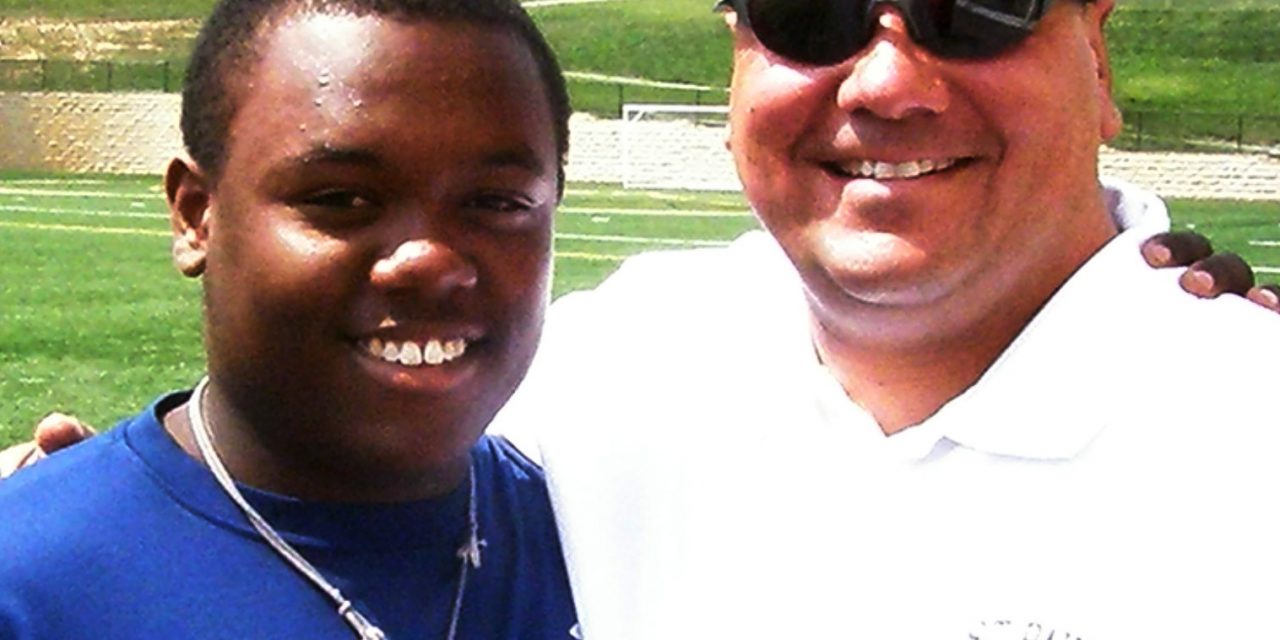 In 2000, Cardinal Gibbons shared the MIAA B Conference football championship with Archbishop Curley. It was the school’s last gridiron title and, when the Crusaders completed the 2009 season, there was anticipation that another crown would coincide with the 10th anniversary of that magical season.

That all changed on March 3. The Archdiocese of Baltimore announced Gibbons was closing at the end of the school year.

“This team would have been excellent,” said Scott Ripley, who returned to Gibbons in 2007 for his second stint at the helm of the school’s football program. “It was a blue collar school where everybody gets their hands dirty to make it succeed.”

In his office at St. Paul’s School where he is the newly appointed assistant athletic director, an 18-inch by 24-inch picture of the 2009 Cardinal Gibbons football team sits atop a file cabinet near his desk.  Ripley and 20 holdovers from last fall’s squad have started a new-albeit unexpected-chapter in their lives.

Most are at MIAA schools like senior Jordan Ellis and sophomore Teddy Martinez, who are with Ripley at St. Paul’s. Other Crusaders will be playing for Poly, City, Edmondson, New Town and North County this fall.

“I still wish I could play with them, but it’s a new opportunity with Curley,” said senior quarterback Luke Stidham, who’s slated to start for the Friars this season. “We had our whole offensive line back, speed on offense and defense. We were all set.”

“The football team was really close. We had great leadership with Luke, Ben [Curtis], Keaton [Sanders] and Kelly [Talbert] and it was taken away from us,” said Ellis. “We thought this year going to be the year.”

Ellis admitted he recently came to terms with the closing of the school located on the corner of Wilkens and Caton avenues. Stidham has gotten together several times with some former Gibbons classmates on the steps outside of the gym and eat McDonald’s, like they did when they were freshman.

The closing was hardest for Ripley, a 1987 graduate who coached his alma-mater to the 2000 championship and went 7-4 in 2009 after three wins the season before. He had fundraising plans set, in addition to spring practice, when the decision was announced.

”It was really strange, I was looking to get the kids into high school instead of college,” said Ripley, who coached the Crusaders the first time from 1997-2001. “The relationship with the coaches has really helped. They’re always calling, telling me the kids are doing a great job.”

Though the players won’t be fully engaged in their new school for another couple of weeks, being on the football field helps the transition process. But the hardest part still lies ahead.

“Now we’re preparing ourselves to go against each other. It’s a weird feeling,” said Stidham, who will play against Ellis, Martinez and his former coach Sept. 17. “It’s going to be emotional. We were like brothers, doing everything on and off the field together.”

“We all agreed just because we’re on different teams does not mean we’re not going to play our hardest,” said Curtis, who’s at Calvert Hall and will play against Angelo DeShields (Mount St. Joseph) and matchup with Keaton Sanders and McDonogh School during the fall. “We did it in practice to each other and it doesn’t make sense not to go our hardest against each other.”

Ripley, who will coach linebackers and special teams for St. Paul’s, said it will be strange playing against his former players. He thinks the last few months have been a growth experience.

“The kids really had an obstacle to overcome,” said Ripley. “I don’t think the kids are bitter, they’re disappointed they don’t get to finish their high school career at one school. I think they’re excited for the challenge, but in the back of their minds, it’s hurts that they’re not a part of Cardinal Gibbons football.”

Where Are They Now?