For starters, a thriller 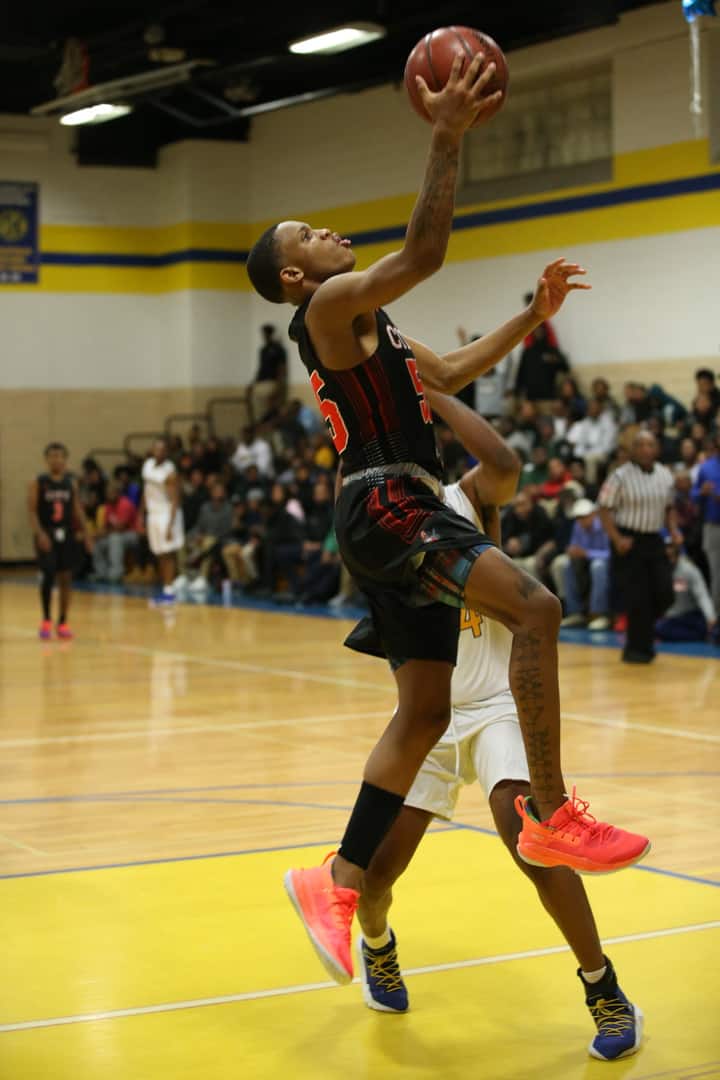 Ahmed Harrison goes up for two of his 24 points for City College Thursday. The No. 9 Knights defeated 11th-ranked Mervo in overtime in the season opener for both inside a packed Mervo gym. (photo – Jimmy Fields Sr.)

City’s again relying on transfers this season. If Thursday’s an indication, the Knights could be in for the long haul in the Baltimore City league.

No. 9 City defeated 11th-ranked Mervo, 71-65, in overtime in the season debut for both in Northeast Baltimore. Junior guard Ahmed Harrison scored 24 points for the Knights (1-0 overall), and seniors Dominic Carrington and Eric Cuthrell each added 15.

In a classic, albeit early, city league grinder, The Alameda school combine an impressive debut from Harrison with an resilient effort in the extra session to gain an early hold in the city league’s Division B. The top team in Division A and B will meet for the city title in February at Morgan State University.

Though the road to Hill Field House promises to have many twists and turns, Knights coach Omar Smith hope Thursday was a precursor.

“I’m proud of my guys…we knew it was going to be tough to come here and get a win,” said a raspy Smith. “They persevere, overcame some adversity, some guys step up and made some big plays at big moments.”

Trailing 62-59 in overtime, City went on a 7-0 run, starting with a 3-point play from Clarence Obiajulu and Kevin Kalu’s follow dunk to take the lead for good. The Knights finished the job at the free throw line, going from 5-of-6 including 4-for-4 from Carrington.

“We played and fought to the end. We never gave up,” said Carrington. “Even when we down four points, I told them keep playing, anything can happen.”

Harrison, a 6-f00t transfer from Gerstell Academy, got the Knights to overtime with a scintillating final eight minutes of regulation. He scored 15 points in the fourth quarter, and 20 in the second half.

Playing on the court where father Marcus starred for the Mustangs nearly 20 years ago, Ahmed Harrison, who helped Gerstelll Academy to back-to-back MIAA B Conference titles, was “lit” Thursday for his debut.

“We had to find a way to win so I do whatever I have to do,” said Harrison. “Today it was for me to score the ball.

The only word I can say is lit. The transition is totally different, you go from private school, not a lot of parents and kids at the games. In the city, there’s a lot of animosity in the crowd and you’re expected to win.”

Expectations were high last season for City coming off a surprising run the season before. With a host of transfers, the Knights were a VSN preseason Top 10 squad, but didn’t become a cohesive unit until late.

Smith, in his third season, thinks this year’s team is different, starting with Harrison.

“We as a team recognized he was going to bring some toughness,” Smith said. “It’s usually on the defensive end, but with the lineup with him, Carrington and Karell Booker, I encouraged him to drive to the basket or shoot the mid-range. People don’t expect you to look to score.”

The left-handed Harrison exploded to the basket for back-to-back scores and dropped a three-pointer as City turned a 43-41 deficit at the start of the fourth into a 50-45 lead with 5 minutes, 57 seconds left in regulation. Mervo, courtesy of a technical foul on Kalu, closed to 50-49, but Harrison’s steal and layup put the Knights up 52-49.

City led 59-55 after Harrison drained another three-pointer near the elbow with 1:36 left in regulation. The Mustangs got scores from Taylor Miller and Daniel Wilson, the latter with 32.3 seconds left in regulation to force overtime.

Mervo got a free throw and short floater from Demonee Carter after a City technical foul to start the overtime scoring. Obiajulu, a 6-foot-6 junior, powered the ball in the basket and was fouled, and completed the three-point play.

Harrison swiped the ball from a driving Carter and drove to the basket. He missed, but a trailing Kalu got the ball and slammed it through, giving City the lead for good.

Kalu, a 6-8 transfer from Parkville, finished with four points, five rebounds and two blocks. In his first game after missing last season with ACL injury, Will Thomas led Mervo (0-1) with 23 points, and Carter finished with 16.

“They [City] were the more disciplined team,” said Mustangs coach Harding. “We have to do a better job rebounding.”

The Knights another tough road challenge, traveling to Anne Arundel County for a non-league match with No. 12 Broadneck. The Bruins reached the Class 4A state final last season.

It will be more casual setting compared to Thursday’s hot and packed Mervo gym.

If Thursday’s an indication, the Baltimore City league should again be a wild ride.

City got big contributions from Dominic Carrington, Ahmed Harrison and Kevin Kalu Thursday evening. Carrington had 15 points including four-of-four from the free throw line in overtime while Harrison posted a game-high 24 points and Kalu provided a momentum-shifting dunk in overtime as the Knights won their season debut.

“We’ve been talking leading up to the season with all the transfers and guys playing with and against each other during the summer…there are five to six strong teams in the city this year,” said Smith. “We expect five to six dog fights.”