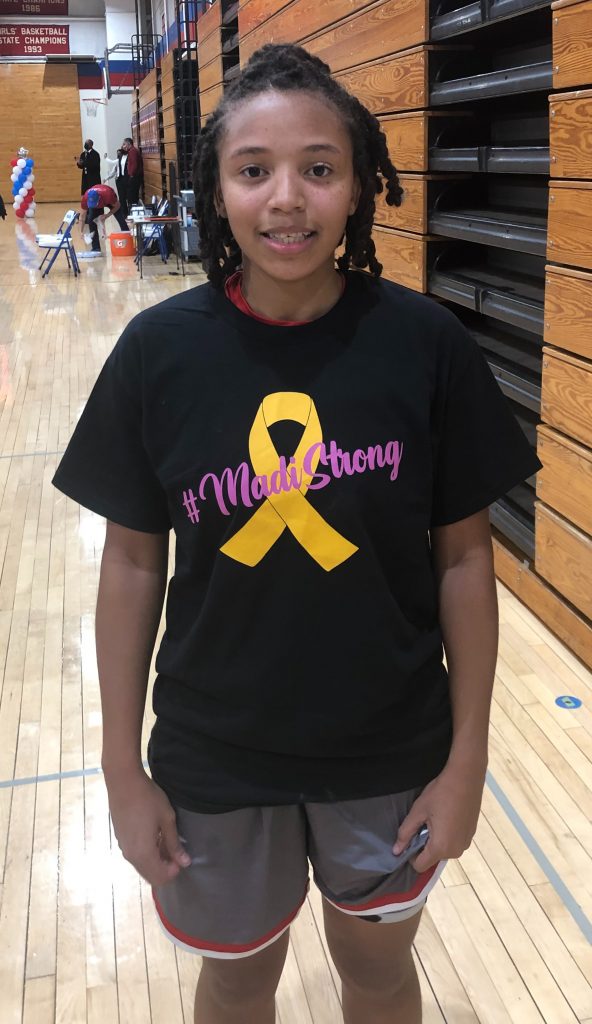 Cincear Parker helped Glen Burnie girls basketball keep its perfect season intact Friday. The sophomore guard finished with 16 points as the sixth-ranked Gophers move to 17-0 with a victory over No. 7 Old Mill in a key Anne Arundel County contest.

Friday, the No. 6 Gophers made arguably their biggest pronouncement, defeating seventh-ranked Old Mill, 53-47, in front of a capacity audience in Millersville.

Glen Burnie broke away from the reigning Anne Arundel County champ Patriots in the pivotal fourth quarter, claiming a regular season sweep and remaining the only unbeaten team (17-0) in the Baltimore region.

The Gophers, for years an afterthought in Anne Arundel County, punched their ticket to next weekend’s league championship game.

“They bought in at the beginning: the weight lifting, the conditioning,” Porter said. “They bought in from the beginning. This is the type of game we were doing this for. This tough, hard-nosed game. It was good all around for us and kudos to them as well.”

Not only has the season gone largely as Porter had expected, the Gophers followed his script, using a ball-hawking 1-2-2 halfcourt zone defense to hold a commanding 28-18 halftime lead.

But, true to order, Old Mill (12-2) rallied. The Patriots pulled to 36-34 through a third-quarter long 16-8 run sparked by its defense and combined 12 points from Amani Watts (18 points, 12 rebounds, two blocks) and Amaya Douglas (seven points).

The Patriots had two excellent chances of tying the contest early in the fourth quarter, but a pair of missed layups in transition stemmed a furious comeback. Glen Burnie went on a game-delivering 12-1 run for a 50-37 Gophers advantage with around four minutes left in regulation.

“They were going to have a run; we knew it,” Porter said. “It was just what we had to do to stop their run. Put a halt to it. That’s the type of team they are. They make big runs. It’s just a matter if you can stand the run or not. I’ve got a good group that battles.”

Following those two errant layups by the Patriots, Cincear Parker converted a layup in transition on a pass from super-sub Malorie Eslick, who then fed Demiah Austin for a fastbreak basket for a 42-37 advantage. Parker then nailed a 3-pointer from the left wing, Layla Washington converted a layup in transition, and Eslick buried a 3-pointer from the left baseline for the 13-point lead.

Old Mill could get no closer than six points the rest of the way.

“We had to stay calm and trust each other,” said Parker, who paced the Gophers with 16 points followed by nine from Lania Nick in a balanced offensive attack that was slowed by Old Mill’s 2-3 matchup zone and fullcourt press. “We just had to stay focused during the tough times. It feels great (to be undefeated) but come playoff time, we just have to cut everything like we’re 0-0 and work hard.”

Stingy defense and a handful of unforced turnovers led to a sluggish start as the squads combined for 11 points and 13 turnovers in the first quarter. Glen Burnie did not get on the board until the 2:46 mark of the first period.

Paced by four 3-pointers, including a pair from Parker, the Glen Burnie offense roared to life with 22 points in the second quarter to forge the 10-point halftime lead. Watts kept the Patriots in the contest with 10 points and six rebounds in the first 16 minutes.

Old Mill mounted a comeback in the third, but wasn’t able to overtake the Gophers, who won the first meeting, 56-46, last month on Baltimore-Annapolis Boulevard.

Patriots coach Henry Fuller said the missed chances to pull even early in the fourth “changed momentum” for his team.

“We were right there. This game, it was self-inflicted turnovers. Unforced turnovers really hurt. We had 12 unforced turnovers in the first half. That’s 24 points,” said Fuller. “If you cut that to 12, that’s 12 points we left off the board and we missed a ton of free throws in the first half as well. We have to go back and make corrections and I’m sure we’ll see them again, (possibly) in the County Championship game.”

Barring upsets, Old Mill will get a third shot at the Gophers in the Anne Arundel County final.

“We want everybody to know that GB is for real,” Porter said. “It’s for real and not only in sports but in academics as well. We want to build the culture in the school. We raise the bar one game at a time.”