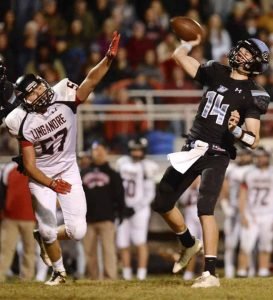 After losing twice to Linganore High – in vastly different outcomes – last season, Westminster football team wanted to show Friday its a worthy challenger to the Class 3A state champions.

The Owls have some work to do. Linganore defeated No. 10 Westminster, 49-7, in a non-league contest at Urbana in Frederick County.

Johan Samayoa rushed for 113 yards and senior quarterback Ryan Leyh and junior Ben Musselman each had two rushing scores for Linganore. Christian Etchison accounted for Westminster’s only score with an one-yard touchdown run.

In a game moved from Westminster’s Ruby Stadium to Urbana’s turf field, Linganore (3-0 overall) put up a running clock on the defending Carroll County Athletic League champs, extending its winning streak to 11, dating back to last season. The Lancers, who defeated Milford Mill Academy in the 3A state title game at Navy last December, has beaten Baltimore-area squads Archbishop Curley, No. 15 Edgewood and Westminster by a combined 147-32 to start its title defense.

Last regular season, Linganore defeated the Owls, 58-28, but the Lancers escaped with a 16-14 decision in the West Region final. Westminster, with a solid senior nucleus, knows likely it will have to beat Linganore in the region playoffs if it wants to reach its first state final since 2005.

The Owls (2-1) had three turnovers Friday and just one first down and 30 yards of offense in the second half. The Lancers opened with 21 straight points before Etchison, a Mount St. Mary’s lacrosse recruit, scored from a yard out after keeping the ball on a fake field goal play.

Linganore, ranked 13th in the state media poll, got second half scores from Musselman, Leyh and Joey Felton. Ethan Zirkle returned an interception 50 yards on the game’s final play.

Westminster, ranked 21st in the state poll, looks to rebound at Manchester Valley in a Carroll County match Friday evening.