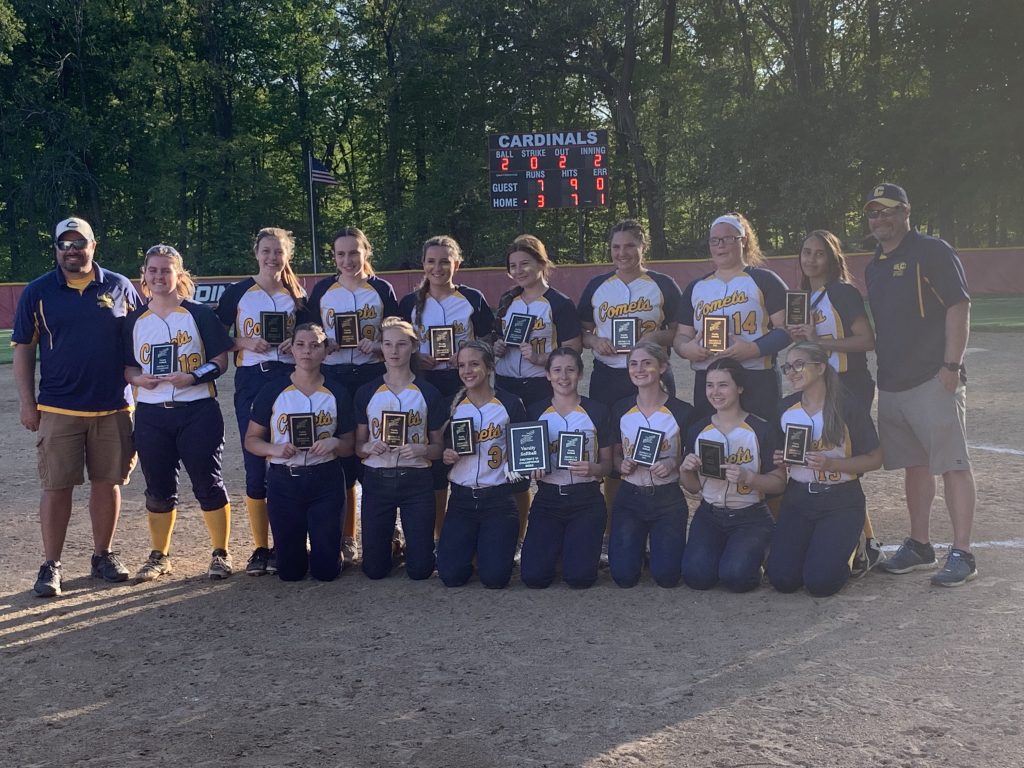 Missed opportunites was the theme for Catonsville High in its two regular season softball meetings with Carver Center A&T.

It wasn’t the case in the third matchup Tuesday. The 12th-ranked Comets made it happen as well as capitalize on No. 10 Carver Center’s mistakes in a 7-3 victory in the Baltimore County championship game at CCBC-Catonsville.

Senior Maggie Kreis drove in three runs and struck out 12 on the mound for the Comets (13-4 overall). Haleigh Frey went 2-for-3 and scored a run for Carver Center (12-3).

Catonsville established a 7-0 advantage through four innings, winning its first Baltimore County championship since 2005. The Comets did it by winning the rubber match with upstart Carver Center, which defeated them 6-0, a couple of weeks ago on their home field.

The Comets won the first match, 2-1, in Towson.

The defending Class 4A state champs didn’t take anything for granted Tuesday.

“It was missed opportunities on top of mistakes,” said Catonsville coach Paul Harris of the prior meeting with the Wildcats. “I don’t want to take anything away from Carver’s pitcher Mallory, she was awesome…she kept my hitters off-balance…That was our one takeaway, this time we weren’t going to leave anything on the table.”

Kreis had to leave immediately after the postgame awards ceremony Tuesday to attend a function at Catonsville. The veteran made her presence felt, going 3-for-4 with the three RBI, including a two-run double in a three-run fourth putting the Comets up, 7-0.

“She came through like she was supposed to, that’s why she bats where she does,” said Harris of his No. 2 hitter. “We count on the lower part of our lineup getting on base, when that happens, it usually means more runs.”

Kreis kept Carver Center’s bats in check the first five innings, accumulating her 12 strikeouts. She fanned nine of the 10 batters she faced at least once. 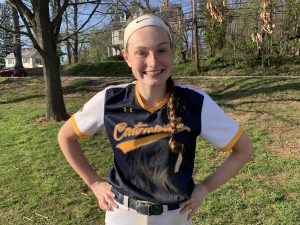 Maggie Kreis was impressive Tuesday for Catonsville softball. The senior struck out 12 and finished 3-for-4 with two doubles and three RBI as the No. 12 Comets claimed the Baltimore County championship with a 7-3 victory over 10th-ranked Carver Center A&T at CCBC-Catonsville.

Kreis and the Comets set the narrative in the opening inning Tuesday. She got Catonsville’s first hit with an one-out single, followed by Katherine Bielski’s single to center, advancing Andie Sutton, Kreis’ courtesy runner, to third.

Sutton scored on a wild pitch by Carver’s ace Mallory Cooper. Cooper’s battery mate, Madalyn Colt’s throw home got past Cooper as Sutton slid home and the ball rolled to second. Bieleski, who was on second on the throw after her earlier single, came home for a 2-0 advantage.

Kreis fanned the side in the Wildcats’ home first. In the third, Kries’ doubled in Abbie Mitchell and Sutton, courtesy running for Kreis, scored on a fielder’s choice, making it 4-0.

The Comets loaded the bases in the fourth for Kreis, who sent a sharp liner down the leftfield line, scoring Kyleigh Grieve and Sam Rickwalder, extending the lead to 6-0.

Harris, who guided Catonsville to the program’s first state crown in his first season last spring, said his squad’s been focusing on hitting the last couple of weeks.

“We talked about hit approach, not just that, we talked about our mental approach,” said Harris. “You get a bad strike, you swing at a bad pitch, how we’re going to handle that next pitch in the box…saw a lot of good two strike hitting. Just all around great contact all the way up and down the lineup.”

Carver Center, in its first league championship game, got to Kreis in the latter stages. With two outs in the sixth, Frey tripled with two outs and scored when the relay throw got past third.

The Towson school got four hits in their final at-bat with Lauren Allender and Robin Palmer producing RBI singles, giving Wildcats coach Kevin Klimko some solace after his top player Cooper exited in the fifth with an ankle injury.

“I’m really proud of these kids. They never quit right to the last out,” said Klimko. “They weren’t prepared when they got here and that’s my fault.

The last time we played her (Kries) we stayed off her (Kreis) riseball and today we didn’t. That was the difference today.”

Carver Center, which lost in the 2A North Region final, hopes to breakthrough into a first state quarterfinal trip. The Wildcats open with Lansdowne or Milford Mill Academy Monday in the Region I semifinals.

Catonsville begins defense of its 4A crown Monday against Perry Hall in the North Region I semifinals. No Baltimore County program has won consecutive state softball championships.

“They’re doing a good job peaking, we’ve won four in a row,” said Harris. “They’re hitting the ball, pitching’s looking real good…I’m anxious to see them continue with what they’re doing right now, and if they are, we should have a deep run.”