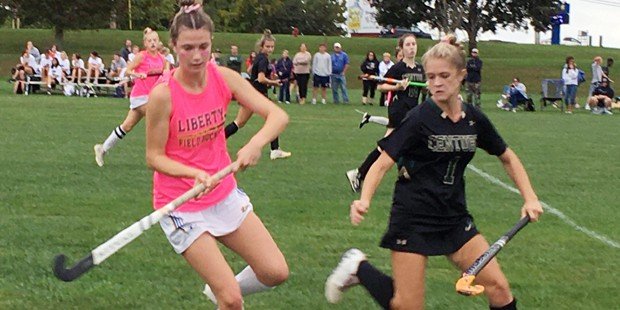 After claiming Carroll County titles for the last three seasons, No. 15 Liberty edges 13th-ranked Century for a chance to extend its reign at the expense of its neighborhood rival

This year’s game, played Tuesday in Eldersburg, was no exception as the 15th-ranked Lions edged the No. 13 Knights, 2-1, to secure the inside track toward winning a fourth straight Carroll County Athletic League crown under coach Brenda Strohman.

Both teams were unbeaten in league play coming into the game.

Senior Caitlynn Szarko scored the first goal for Liberty and then assisted the second in the No. 15 Lions’ 2-1 victory over 13th-ranked Century, Tuesday afternoon in Eldersburg.

Szarko had a lot to do with the outcome being resolved in Liberty’s favor.

The West Chester University commit scored the game’s first goal on an assist from Kyla Seitz early in the second quarter and then assisted Jenna Evans — who scored the game-winner last spring in another 2-1 verdict over Century — with 8:48 left in the third period to give Liberty a 2-0 lead.

Although the Knights (8-2-1) halved the deficit after a wicked shot by senior midfielder Mackenzie Feltz rebounded to junior attacker Ella Morris for a put-away that eluded Liberty goalie Emma Meissner, the goal came with only 1:40 remaining in regulation.

According to Szarko, the win was a “huge” one.

“It’s always the biggest game in the county — the closest game,” she said. “Getting that goal early really helped us come together as a team.”

Szarko and Evans, with help from Lucy Davison, also did yeoman-like work on the defensive end by holding the talented and ever-dangerous Feltz, headed to play hockey at Salisbury University next fall, mostly in check until the waning minutes.

“She’s hard to stop,” Century assistant coach Rosalia Cappadora said. “You have to double or triple-team her.”

Earlier in the contest, Morris just missed on a sizzling shot that carried over the goal late in the first half and Feltz blasted another shot that Meissner kicked away in the third quarter.

The Lions’ other defensive star was senior center back Anna Culver, who spoiled a slew of Century’s most promising chances by getting to the ball first and moving it rapidly forward.

“She was phenomenal today,” Strohman said. “She was our last line of defense, and when she gets the ball she goes (up the field) with it.”

The Knights moved the ball inside the circle often enough, but “couldn’t connect” against Meissner, who was credited with 14 saves.

“We’d get in there and we were just a little excited,” Cappadora said. “It’s a big rivalry game.”

Although the Knights don’t have any county games left, the Lions (7-2-1) will need to beat Manchester Valley and Francis Scott Key to earn another title.

“We just have to keep doing the things we’ve been doing,” Strohman said. “(Use the) give-and go and stay wide. We have to keep focusing on the little things to get better. This was a big game, but we want to still be playing on Nov. 13 (in the state championship game).”