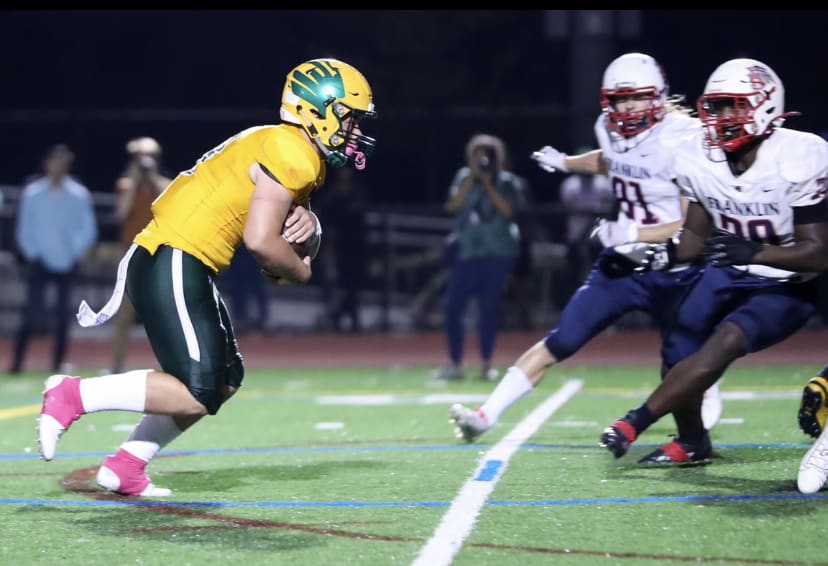 Dundalk running back Jordan Fiorenza (left) carries the football as Franklin’s Santra Collins and Gary Sullivan (81) close in during Friday’s Baltimore County football game. Fiorenza finished with 32 carries for 205 yards and accounted for three scores as the No. 12 Owls improved to 7-0 with a 27-13 victory over the 6th-ranked Indians. (photo – Sports Majors)

by Derek Toney
Dundalk High running back Jordan Fiorenza recently changed his technique, becoming smaller, of sorts.
Friday evening, Fiorenza and his Owl teammates put together a ginormous effort. The 12th-ranked Owls knocked off No. 6 Franklin, 27-13, in a Baltimore County Division I contest.
Fiorenza rushed for 205 yards and accounted for three touchdowns for the Owls, while senior Abdullah Sargeant highlighted the defense with two interceptions. Gavin Nelson totaled 174 yards on five receptions and two touchdowns for Franklin.
Dundalk built a 21-0 first half advantage then shut the door late in regulation, putting a stranglehold on the Division I championship and moving closer to a perfect regular season. The Owls (7-0 overall, 5-0 Division I) can secure the title outright with a victory over Dulaney (0-7) next weekend.
Friday was Dundalk’s first victory since 2015 over Franklin (5-2, 4-1 Division I), arguably the area’s best public program over the last decade-plus.
“I’m just so impressed with our kids and their resiliency,” said Dundalk coach Matt Banta. “We knew this was a heavyweight fight, blows were going to be traded. We said ‘hey when they punch, we punch right back.’ The kids responded.”
“I knew we were going to win,” said Fiorenza.
Fiorenza toted the ball 32 times Friday and added a 33-yard touchdown pass to senior Marcus Nicholson in the first half. The 5-foot-10, 210-pound junior often lowered his body as he hit the line then squirted through open lanes.
“It’s a habit…once I started working with Coach Smith (Dundalk running back coach Chris Smith], started doing more running back drills, started running lower, high-stepping more,’” said Fiorenza.
Fiorenza gave major props to his offensive line featuring Dalan Johnson, Chimdy Onoh, Julian Haddix, Mike Blesdoe and Dominic Knighton as well as tight ends Kamare Watson, Dale Martin, and Kevon Briscoe.
Dundalk ran for 260 yards Friday.
“We wanted to start fast and lean on our ground game,” said Banta. “We thought we could run the ball on these guys.”
Dundalk took advantage of a bad Franklin punt snap, getting possession at the Indian 35-yard line. Fiorenza, who went 18 yards on the first play of the drive, hit the end zone from nine yards with five seconds left in the opening quarter.
Fiorenza broke off a 31-yard run in the Owls’ next possession, but the host faced a 4th-and-15 at Franklin’s 33. Fiorenza took a pitch from quarterback Calvin Stokes and threw the ball to an open Marcus Nicholson for a touchdown, putting Dundalk up 14-0.
“I almost ran it since it was 4th-and-20,” laughed Fiorenza.
Four plays later, Sergeant got his first INT of the evening, setting up the Owls at the Indian 22. Three plays later, Fiorenza, who had 135 yards rushing in the opening half, extended the lead to 21-0 with an 8-yard touchdown run.
Robert Pitts (four rushes, 37 yards), who along with Jaden Perez (nine carries, 22 yards) provided quality carries Friday, scored on a 4-yard touchdown run after breaking a 33-yarder the play before, giving Dundalk a 27-6 advantage midway through the third.
Franklin, which rushed for only 42 yards Friday, used big passing plays to stay within reach. Nelson hauled in a Demery (nine-of-26, 239 yards) bomb and went down the sidelines for a 68-yard touchdown, bringing the Indians to 27-13 with 7 minutes, 3 seconds remaining in regulation.
The Reisterstown school got the ball back and, thanks to Demery’s 44-yard pass to Khalil Bilal, got to Dundalk’s 1. But a illegal assisting penalty and two incomplete passes ended the drive with 2:56 to play.
Fiorenza went 26 yards for a first down with about a minute left to wrap it up.
“You got to lean on your best guys when it comes to games like this. We fed him a lot,” said Banta. “He’s a horse, he’s not a fun kid to tackle. A lot of teams have found that out.”
“We thought we had opportunities to tackle him in the backfield…he was powerful and strong. A lot of times he just ran through the tackles,” said Franklin coach Anthony Burgos. “We couldn’t tackle him.”
When the game ended, Fiorenza got a bear hug from Haddix and Banta a water bucket dumping as Dundalk celebrated arguably its biggest victory since 2015 when it made a surprising run to the Class 3A state final – a run that started with a win over Franklin in the North Region first round.
Dundalk wasn’t surprised by Friday’s outcome.
“It’s been 100-percent from day one of this week,” said Stokes, a senior. “When we won the Catonsville game (last week), we went straight to Franklin…We manifested this. We said we were going to win.”

Antonio Brown (left), Calvin Stokes, Jordan Fiorenza and Dalan Johnson helped put Dundalk on the verge of the Baltimore County Division I championship. The undefeated Owls can clinch the title outright with a victory over Dulaney next weekend.