No. 12 Elkton dominates Liberty in second half, punches return ticket to 2A state football Final Four; Ewing goes for 225 and 3 TD receptions 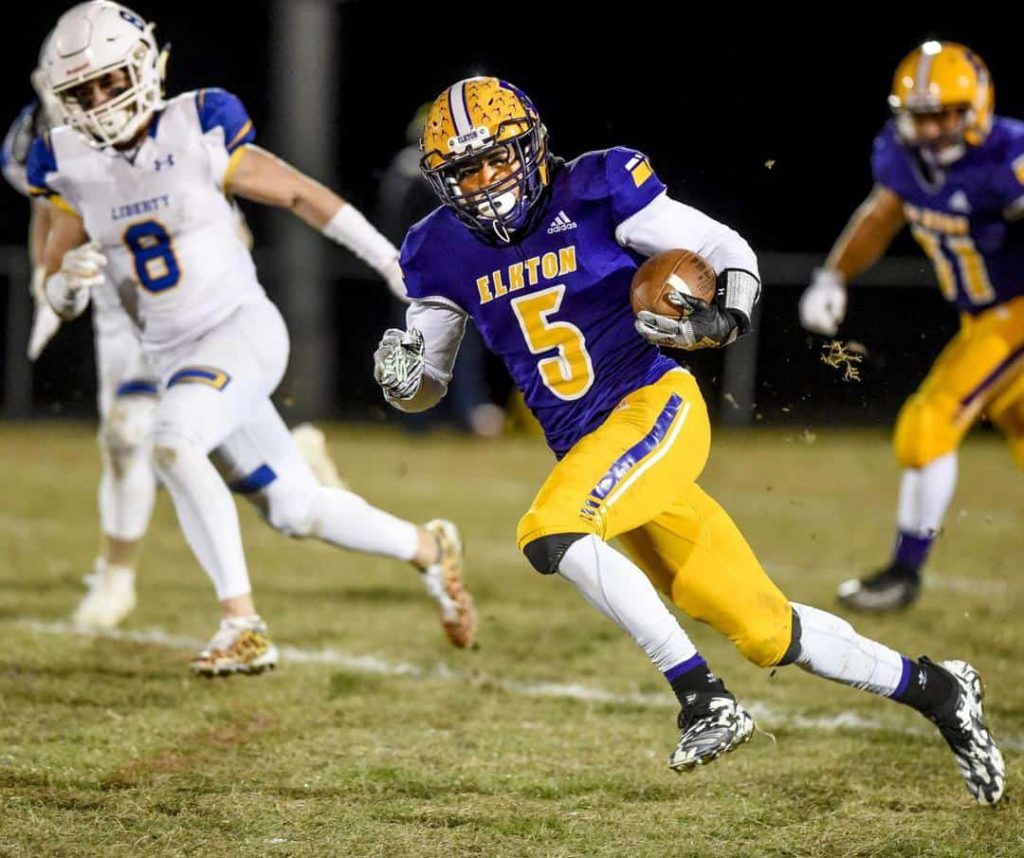 Elkton’s Trevin Ewing (5) is off to the races after catching a pass during Friday’s Class 2A state football quarterfinal against Liberty. Ewing caught five passes for 225 yards and three scores as the 12th-ranked Elks improved to 12-0 with a 47-14 decision over the No. 16 Lions in Cecil County.

All that matters is how you finish.

No. 12 Elkton High followed that advice to the letter Friday night, advancing to the 2A state semifinals for the second straight year with a 47-14 win over visiting Liberty in a quarterfinal contest in Cecil County. Elks quarterback Nolan Null threw for 303 yards and five touchdowns, and senior Trevin Ewing finished with five catches for 225 yards and three scores.

Tied at 14 late in the second quarter, Elkton (12-0 overall) was responsible for the game’s final five scores to advance to week 13. The UCBAC Chesapeake champions will host Frederick County’s Middletown, Thanksgiving Friday, for a trip to the state final, Dec. 7 at Navy.

“The score is not indicative of the quality of football team that’s over there,” Elks head coach Matt Feeney said. “They’re just tough and well coached. We had some big plays and that was difference.”

Liberty (8-4) gained more yards than any other team Elkton faced this season. Senior wide receiver Michael Spitz and sophomore running back Tommy Nelson each eclipsed the 100-yard total mark with a touchdown for the Lions.

After a sluggish start, Elkton’s offense answered with a vengeance, hitting the 40-point plus mark for the 10th time this season. Elks senior back Tashawn Watters went for 138 yards and two touchdowns on 21 carries.

The Lions stuffed Elkton’s running game early, while Nelson put the Carroll County squad ahead halfway through the first quarter with a 46-yard touchdown run. Liberty had a chance to run the scoreboard up early, recovering an on-sides kick after Nelson’s score and grabbing an interception on the Elks’ next possession, but didn’t capitalized.

Elkton shook off the rust, scoring on consecutive drives in the second quarter for its first and final lead, 14-7. Watters scored on a 1-yard run, and Null threw a short pass left to Ewing, who dashed 45 yards down the sidelines to the end zone.

“They were playing great technique, and we were able to keep them bottled up, but we were starting to have to answer their edge game,” Liberty coach Larry Luthe said. “That probably opened up a couple things inside when they ran a couple bubble screens and swing passes.”

The Lions quickly tied the game with a big play of their own as quarterback Nate Kent found Spitz down the middle. Spitz bobbled the ball momentarily, but secured it and took off for a 68-yard score. Liberty tried another on-sides kick, but Elkton recovered at midfield.

Seven plays later, Null (12-of-21) tossed a 24-yard touchdown pass to Mike Vass for a 21-7 halftime advantage. On the first play of the second half, Null found Ewing in the slot and the receiver sprinted to the end zone for a 70-yard score.

It was all Elkton from that point. Ewing capped his big evening, hauling in Null’s deep ball over his shoulder for a 76-yard score.

“Their speed just killed us. We didn’t have an answer for it.” said Luthe.

Kent threw for 244 yards and ran for 41 more for Liberty Friday, but he finished just 11-for-30 with a touchdown and two interceptions. It was the final game for 15 Lion seniors, who produced consecutive postseason victories for the first time as well as the first perfect regular season (in 2018) in school history.

“They have left a legacy,” Luthe said of the seniors. “They made the playoffs all four years, and last year they were part of the first undefeated team in the regular season, so it’s going to be up to everybody else to step up and find a way to match that legacy.”

The Elks have been chasing the 2000 squad that went 13-0 and captured the 1A state title. Elkton will try to reach the state final for the third time in program history next Friday night.

“This team is a family and they’ve got only one thing on their minds,” said Feeney. “Middletown is a tough test, but we’ll prepare like we always do.”