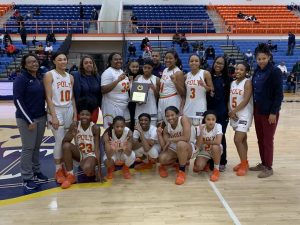 The top-ranked Clippers and No. 4 Engineers overcame taut challenges in the title game at Morgan State University’s Hill Field House Thursday. Poly held off sixth-ranked Western, 55-54, for a second straight championship, while Patterson posted a 60-52 decision over N. 6 Edmondson in the nightcap.

Poly relinquished a seven-point fourth quarter lead before recovering in the final minute to claim its fifth city title in seven seasons. The Engineers completed a season sweep of their next door rivals (schools are in same structure on corners of Cold Spring Lane and Falls Road.

Townes broke a 53-53 tie with two free throws with 27.9 seconds left in regulation. The Engineers regained possession on the alternating jump ball, and Caris Ferguson was fouled with 17.1 seconds remaining.

Ferguson missed both free throws in the double bonus, and Destiny Hawkins was fouled on the other end for Western. Hawkins made the first free throw, but missed the second. After a tie up, the Doves got possession back on the alternating jump ball with three seconds to play.

Hawkins inbounded the ball to Sanaya Gray, whose runner missed as the buzzer sounded. Trailing 45-38 with 6:57 to play, the Doves went on a 13-5 run, capped with a steal and layup from freshman guard Nyceara Pryor, putting Western up, 51-50, with 2:02 remaining.

The Engineers regained the lead, 52-51, on Lilly’s drive with 1:21 left. After Vashae Rideout’s transition put Western back ahead by a point, Lilly pulled Poly back even, 53-53, with a free throw with 46.2 seconds left.

“We kept talking to each other and make sure everybody’s heads was in the game,” said Lilly. “We make sure we made free throws, listened to coach and got to the basket.”

Lilly, who Peace said is “coming into her own,” had a hand in Poly’s first three baskets as it led 9-0. The Doves answered with a 17-2 surge, capturing their biggest lead of the game.

Rideout finished with 17 points for Western (18-4), which trailed 40-31 late in the third after two free throws from Lilly. Pryor added 15.

“Every time they drove, they were getting fouled, so we started doing the same thing,” said Townsend, whose team’s xx-game winning streak was snapped. “I told the girls to leave it all out there, and that’s what they did. We left it all out there.”

With each missed jumper, Marvin Price was getting frustrated during the boys’ city title match. His angst only grew as Patterson was tied with Edmondson late in the fourth.

Price found his touch and the Clippers are city champs for the second time in three seasons. Junior guard Zac Blackwell scored 17 points and Jalen Willis added 14 for Patterson (18-3).

“Our guys kept battling and battling,” said Clippers coach Harry Martin. “To their credit, we never allowed them to get the lead.”

In a textbook city league grinder, Patterson did the little things to remain perfect in league play this season. The Clippers led by 10 points at intermission, only to see Edmondson draw even at 44 on Keith Bolden’s 3-pointer with 5:17 left in regulation.

Patterson got the lead back after a two-minute scoreless stretch with two free throws from Blackwell and one from Price. Price got an inbound pass from Gerard Mungo at the top of the 3-point arch.

Price buried an uncontested dagger, making it 50-44 with 2:36 left in regulation. He capped a decisive 11-0 run with a vicious left-handed dunk off the baseline, sending some of the nearly 1,500 fans to the exit doors.

“It was like a relief…thank god,” said Price. “It was close the whole game and I was cold.”

Price returned to the Kane Avenue school last spring after playing at West Virginia’s Huntingtown Prep in his junior campaign. He’s been playing himself back into shape after a knee injury during the offseason.

Price hasn’t have to be a huge offensive presence with veterans like Mungo and TJ Thomas, and the emergence of Blackwell. Price finished with 14 rebounds Thursday.

“At the end of the day, he rebounds the ball, he blocks shots,” said Martin, “and he’s the biggest guy on our team right now.”

Price started the second quarter with a block, and Willis finished the series with a dunk. Price assisted Joe Jones’ basket as the Clippers established their first 10-point advantage at 18-8.

Trailing 42-35 late in the third quarter, Edmondson scored the final six points, capped by Tre’Shawn Lewis’ jumper, to pull to 42-41. Bolden got the West Baltimore school even with a deep strike from behind the arch.

The Clippers answered as Price, who hadn’t score since a follow-up midway in the third, connected on the 3-pointer.

“We had to get our main player involved,” said Willis.

Edmondson (20-3) got another big performance from senior forward Marcus Hocker, who posted a game-high 19 points and Daniel Frink added 13. It was the first city title game since 2010 for the Red Storm, who were unranked at the start of the current season.

“These kids have given their all all year,” said Edmondson coach Darryl Dantzler, who recently lost his mother. ““We played tough. We just missed shots — missed layups down the stretch and didn’t convert when we needed to.” 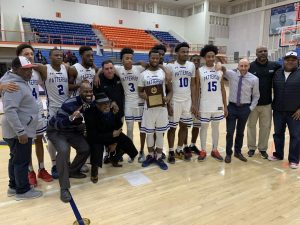 The Red Storm, who lost to Patterson during the regular season, could another shot at the new city champs in the Class 2A North Region playoffs. The Clippers have a makeup contest at No. 8 Lake Clifton Saturday to complete the regular season.