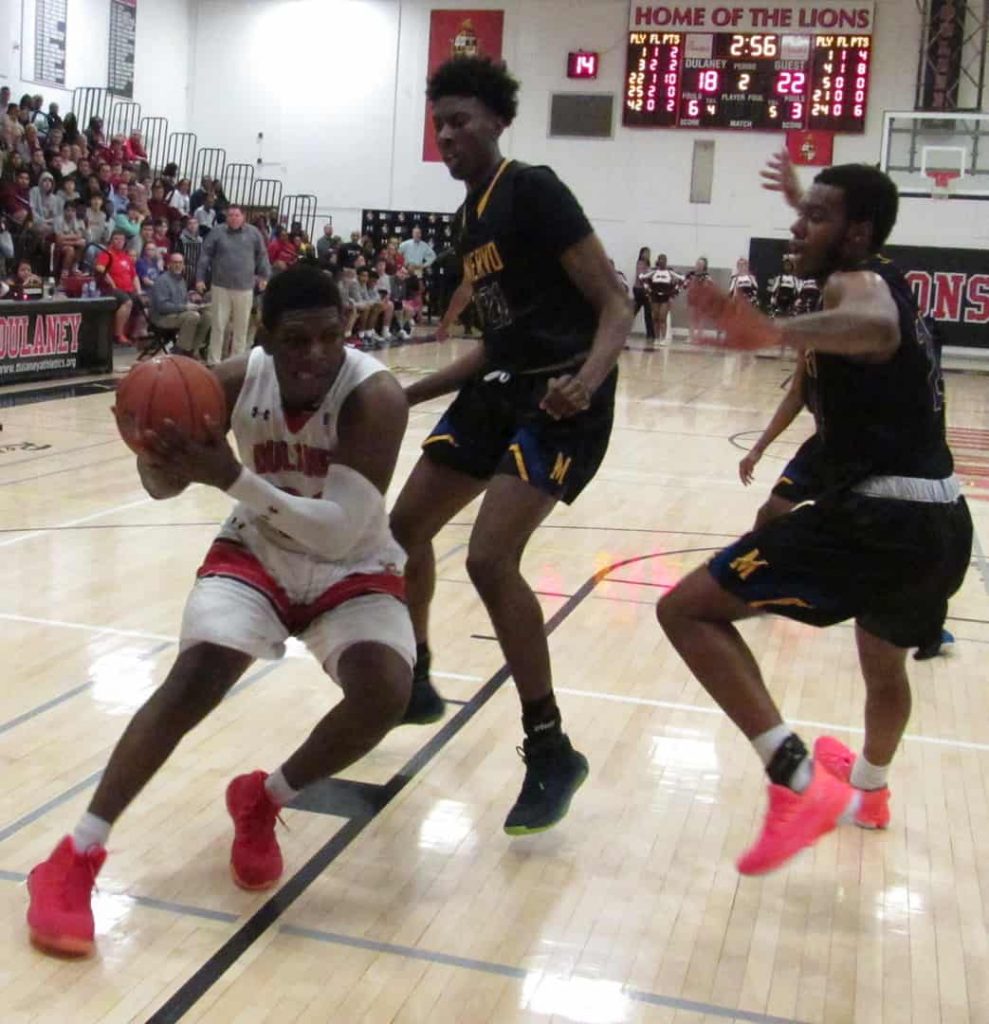 Dulaney’s Cam Byers (left) drives to the basket as Mervo’s Elijah Rantin and Will Thomas defends during the first half of Tuesday’s Class 4A North Region I semifinal. The eighth-ranked Mustangs dominated play in the second half en route to a 78-44 decision over the No. 14 Lions in Timonium.

With its best player back after a year absence and several transfers, Mervo High boys basketball has been a work in progress this season. The postseason has arrived and the Mustangs appear to be hitting their stride.

No. 8 Mervo defeated 14th-ranked Dulaney, 78-44, in a Class 4A North Region I semifinal in Timonium. Senior forward Will Thomas scored 20 points for the Mustangs (16-5 overall), and Demonee Carter added 13.

The Baltimore City school dominated play over the final 16 minutes, advancing to the 4A state Sweet 16. The Mustangs will play at Parkville, Thursday afternoon at 5, for the region title.

Mervo is a win way from the state 4A Elite Eight after capturing its first victory over a VSN Top 20 team this season. The Mustangs dropped decisions to fourth-ranked Lake Clifton, No. 5 City College and seventh-ranked Edmondson in Baltimore City play.

Mervo coach Deron Harding said those experiences helped them Tuesday evening in a front of near capacity audience including a packed Dulaney student section.

“We might not look the same way in the city, but we know when we leave the city,” said Harding. “we know the basketball we play [in the city] is a little tougher and better than some of the other counties and some other cities.”

“We just played team ball, our guards played well, and shout out to [Ryan] Conway — he’s a hell of a player and they missed him out there — but we just came out a good win,” said Thomas.

Conway, one of the area’s top juniors and Dulaney’s leading scorer, didn’t play Tuesday. The 5-foot-11 point guard has been dealing with a bruised bone in his foot the last couple of weeks.

Mervo made it nearly impossible for the Lions to run offense Wednesday with intense ball pressure.

“We love defense, that’s where we strap up,” said Mervo sophomore guard Carlos Alexander. “We feel like we have the best defenders in the city.”

The Hillen Road school never trailed after Carter buried a 3-pointer with two seconds remaining in the opening quarter. The Mustangs closed the first half with nine straight points, capped with Nate Pryor’s basket off a turnover, to claim a 31-19 halftime advantage.

Mervo got 6-foot-9 Elijah Rantin going to the start the second half, scoring the team’s first eight points to extend the lead to 39-21. Dulaney (16-6) drew a technical foul, and Teon Rushing converted two free throws and Thomas scored inside for a commanding 45-21 advantage.

“The kid is working hard in the school and on the court,” said Harding. “He’s our leader, it might not look like it on the court but he leads by his play.”

Thomas said the Mustangs backcourt featuring Alexander, a St. Frances Academy transfer, Carter, Pryor, Teon Rushing (transfer from Mount Carmel) and has come into their own.

“Our guards are very underrated,” said Harding. “You got a lot of guards in the city with names and programs with a lot of history backing them up, but the four guards we got, I’d go to with war any day.”

Cam Byers led Dulaney with 20 points, and Jaylin Webster added 12. The Lions, who reached their first state Final Four in xx years last season, were undone by 28 turnovers and 13-of-27 free throw shooting.

It equaled the Lions’ earliest playoff exit since 2011.

“We got a good old fashioned butt kicking,” said Dulaney coach Matt Lochte. “They got multiple guys who are very talented. Their guards outplayed us tonight. Their bigs outplayed us. We were outplayed from top to bottom.”

Harding said the Mustangs became a cohesive unit after a close loss at Edmondson. Now, Mervo is a win away from its first state Elite Eight appearance since 2007.

“We made a pact that we’re not going to lose,” said Harding, “it’s going to be hard to beat us.”

CLASS 4A NORTH REGION I SEMIFINAL