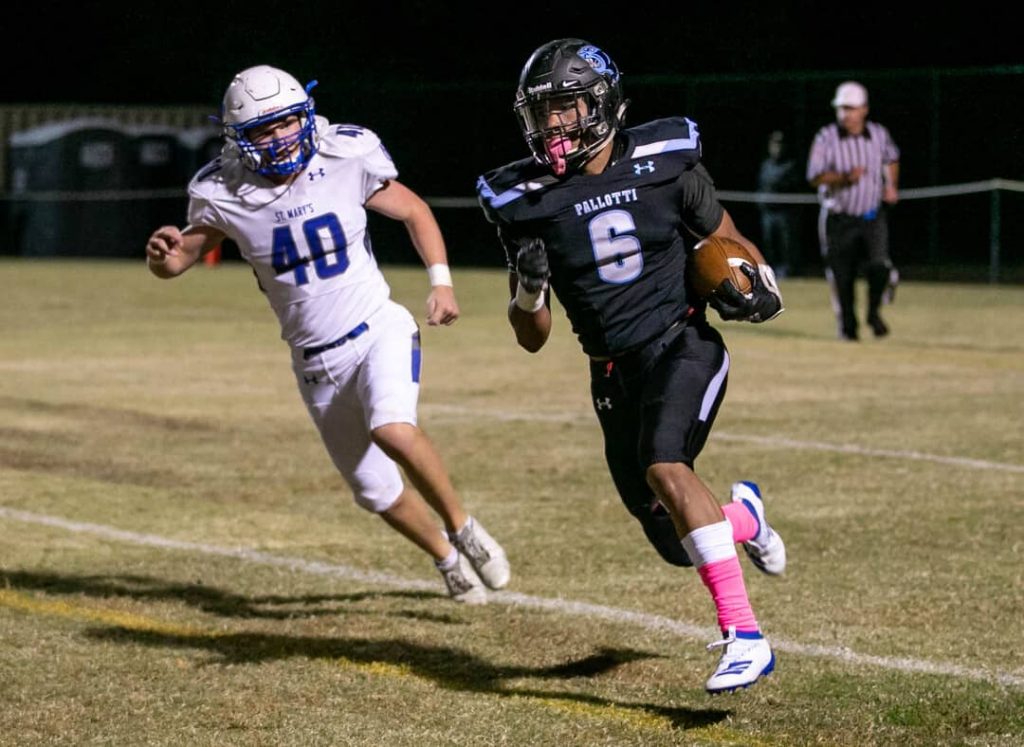 by Derek Toney
As penalty flags landed near St. Vincent Pallotti’s football sidelines Friday evening, Emani Alford tried to ease the situation.
It didn’t work. Two assistant coaches ejected. The Panthers were in a 10-point fourth quarter pit to St. Mary’s on Homecoming.
Heeding the pregame words of his coach, Alford got big. Really big. The senior running back scored 3 touchdowns over a furious final 12 minutes, including game-winner with 1 minutes, 42 seconds to play, giving 14th-ranked Pallotti a 28-24 victory over the 12th-ranked Saints at Fairland Regional Park in Laurel.
In a near repeat of last year’s MIAA B Conference championship game, Alford provided a different ending, finishing with 207 yards and all 4 touchdowns for the Panthers (7-1 overall). Alex Wicks scored twice in the second half for St. Mary’s (4-3, 4-1 MIAA B), which defeated Pallotti, 21-7, at Good Counsel last year for a second straight league title.
Despite penalties, miscues and ejections, the Panthers stayed resilient Friday.
“We got the guys on the side and told them there’s 8 minutes left in the game and do what we do – play football,” said Pallotti coach Ed Ashley. “There’s a lot of time left. We figured out what St. Mary’s was doing defensively and offensively, we looked at our guys and said lead us down the field. The kids wanted, in spite of everything else.”
“Without God we couldn’t had did this. We were down 17-7 and I looked at my guys and said we got this,” said Alford. “We couldn’t lose this game because they beat us in the championship. I looked at my guys and said ‘I got you.'”
Alford, a 5-foot-11, 205-pounder scored on runs of 2, 22, 6 and the game-winner of 7 yards. But his biggest run was probably a 65-yard jaunt after play resumed following the ejection of two Pallotti assistants.
Two plays later, Alford was in the end zone, pulling the Panthers to 24-20 with 7:05 left in regulation. Pallotti got the ball back with 4:18 left in regulation, and got another big play to get in striking distance.
Panthers junior quarterback Ejau Collazo threw a pass downfield for Isaiah Jenkins. St. Mary’s defensive back Trevor Poltrack got a hand on the ball, but Jenkins was able to capture it on the sideline for a 32-yard gain to the Saints’ 24.
Alford did the rest, covering the final 24 yards in three straight touches, giving Pallotti its first lead since midway in the second quarter. Alford added the 2-point conversion for a 4-point advantage.
“They beat us last year and we had a nasty taste in our mouth,” said Jenkins. “We just kept fighting and kept our heads up. We were able to make plays when we needed them.”
Panthers junior defensive back Cameron Prescott knocked down St. Mary’s quarterback Chris Golini’s 4th down pass with 34 seconds left. Pallotti students in attendance rushed the field at game’s end to celebrate the Panthers’ biggest win to date.
Pallotti won last year’s regular season meeting, but, in the title game, was unable to capitalize on early opportunities and fell apart in the second half. It played nearly the same Friday.
St. Mary’s opened the scoring with Patrick Dunleavy sacking Collazo in the end zone for a safety. The Panthers put together a 6-play, 48-yard drive with Alford barreling into the end zone for his first score.
After stopping St. Mary’s at its 10, Pallotti, courtesy of Collazo pass plays to Julian Ganthier (30 yards) and Perkins (41), got the Saints’ 2 with less than a minute remaining in the first half. After a false start penalty pushed the Panthers to the 7, Alford got a yard and time ran out.
St. Mary’s, held to 65 yards in the opening half, got its first score as Golini connected with Gabe Souza on a play-action pass for a 75-yard touchdown for a 10-7 lead with 5:06 left in the third quarter. Samuel Ibeziako recovered a Pallotti fumble inside the Panthers’ 20, and Wicks, who didn’t play in the opening half due to a sore toe, scored from 11 yards, extending the Saints’ lead to 17-7.
Momentum was fully in St. Mary’s favor after dropping Alford for a loss on 4th down to gain possession at Pallotti’s 30 to start the 4th quarter. The Saints failed to score, and Pallotti went 75 yards in four plays with Alford scoring from 22 yards with 8:44 left in regulation, to pull to 17-14.
St. Mary’s needed just 27 seconds to answer as Wicks on a 1-yard touchdown, setup by Dhane Blair’s 69-yard kickoff return. Pallotti coaches argued that Blair’s return was aided by an illegal block.
The Panthers turned to Alford, who had 7 carries for 103 yards over the final 8 minutes.
In the pre-game huddle, Ashley said the old adage “Big-time players make big plays in big games.”
Alford answered the call.
“He carried the team on his back as he’s done a lot this year,” said Ashley, in his second year. “He opened up the passing game because he ran so hard. We had some great catches in the end by Zay [Perkins] and Will because Emani ran the ball hard.”
“That kid [Alford] is a heck of a player. He’s strong, fast,” said Saints coach Jason Budroni. “He wanted to win more than we did tonight. He was the difference.”
It was a good game. I’m upset we loss, but I think we played hard and Pallotti played hard. They got a lot of athletes.”
The win, Pallotti’s 7th straight, gives the Panthers sole possession of first in the MIAA B (6-0) and the inside track to the No. 1 seed for next month’s playoffs. The Saints, who suffered their first league loss since last year’s regular season decision to Pallotti, are tied for second with John Carroll School with a match Friday evening in Annapolis.
Ashley said Pallotti have a lot to work on if it wants to hoist the championship trophy next month. 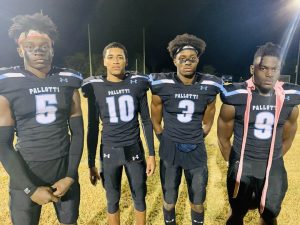 Isaiah Perkins (left), Ejau Collazo, Mehki McDaniels and Emani Alford came up big for Pallotti football Friday evening. The Panthers have sole possession of first in the MIAA B Conference.