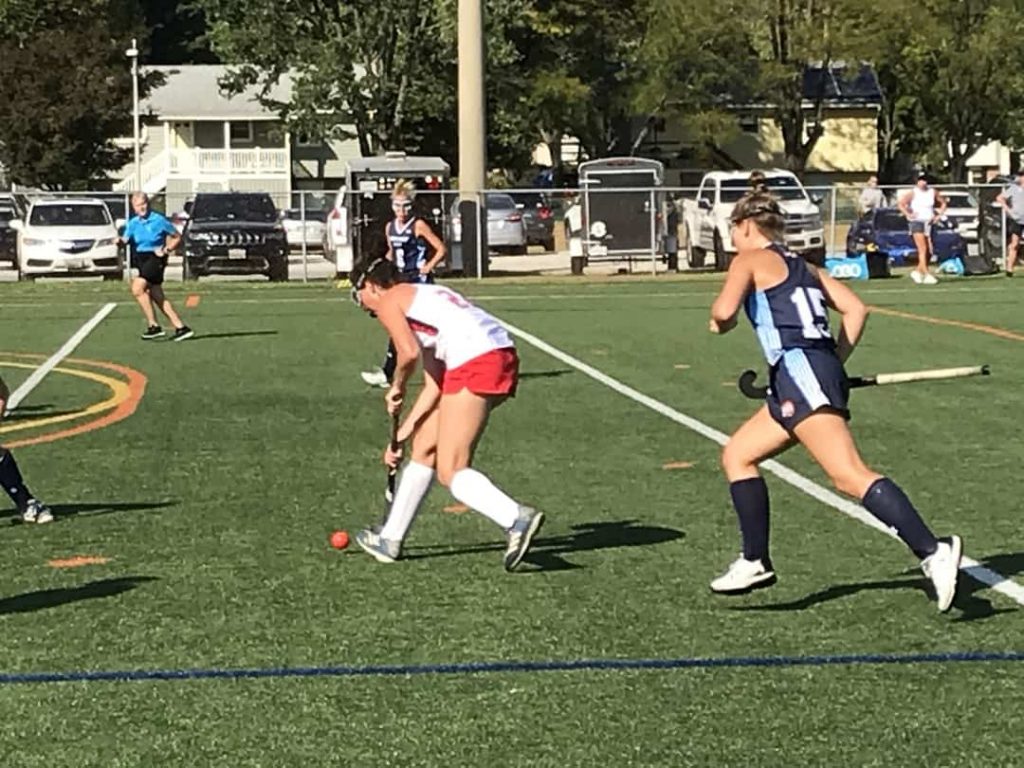 Archbishop Spalding’s Shelby Bumgarner (22) moves the ball with Notre Dame Preps’ Halley Koras in pursuit during Wednesday’s IAAM A Conference field hockey contest. The No. 3 Cavaliers gained their first victory over the second-ranked Blazers since 2016 with a 2-0 decision in Severn.

The No. 3 Cavaliers hadn’t beaten the two-time defending IAAM A Conference champion Blazers in three years and the last time they met, NDP knocked Spalding out of the 2018 tournament semifinals with a single goal.

On their home field Wednesday, the Cavaliers moved the ball well through the midfield and were relentless on penalty corners where Katie Fichtner and Lindsay Beardmore scored the goals in a 2-0 victory.

“All games are tough, but I think NDP has a special mark on our schedule,” Cavaliers senior midfielder Kristin O’Neill said. “We’re always excited to play them. We have a good rivalry and so knowing that we’re good enough to beat them gives us confidence going forward.”

On each goal, the scoring shot came after NDP goalie Brooke Borzymowski stopped an initial attempt on the penalty corner.

Fichtner scored on Spalding’s fifth corner with 1:45 left in the first half, knocking in her shot close to the goal line.

The sophomore forward said when the Cavaliers dominated the attack during spurts throughout the game, their connections were critical against an NDP team with a pair of stellar defensive midfielders, Pyper Friedman and Meredith Medvetz.

“Since we’re so close, we can just pass knowing where each other are and being in the right places,” she said. “And this year we really wanted it, so we had the energy.”

Beardmore, a senior midfielder, added the insurance goal with 14:39 left in the game. The Cavaliers moved the ball down the left side and into the circle before Broymowski stopped the first shot. Beardmore, centered in front of the goal, hammered in the rebound.

“It’s hard to get up like you have to for those games back-to-back,” Brady said, “so you’re always nervous about a letdown, but they came in energized today. I thought we did a good job of possessing the ball. We did a good job of finding teammates and no one had to do too much. It feels good after three years.”

The Blazers also played well, but their inexperience after losing a large contingent of seniors showed against a more veteran Cavaliers squad.

“I think it was kind of figuring out what we had to do on defense and figuring out our stances,” Medvetz said. “Spalding is a very good offensive team as well as defensive. They’re just a strong team all around. One of the things we have to learn from that is how to change the play from us having to be on defense to us forcing offense so they’re playing defense.”

Blazers coach Katrina Ross said she moved Friedman and Medvetz to the midfield to try to generate more offense, but that left the Cavaliers more vulnerable on defense.

Still, Ross likes the progress she sees in her rebuilding team.

“I think we played a great game for the talent that we have and the experience we have,” Ross said. “We’re a young team and all that we’re asking of them is to get ready and prepare for postseason play, every single game progressing and taking what we’re doing in practice and modeling it in the game and they’re doing exactly that.”

The Blazers will have their chance for revenge on Oct. 8 when the teams meet again. With only five teams in the A Conference this season, down from nine last year, each team will play the others twice — something the players like.

“I like playing the good teams twice,” Medvetz said, “because I think each game brings a new scenario, because field hockey’s so tactical. Seeing the different plays, seeing the different options that you have on the field, obviously no game is the same as the next.”

O’Neill said, “Getting to play all these awesome teams every single week, you always have to be on top of your game. It’s a lot more fun. It’s really hard and tiring, but these are the most fun games to play.”