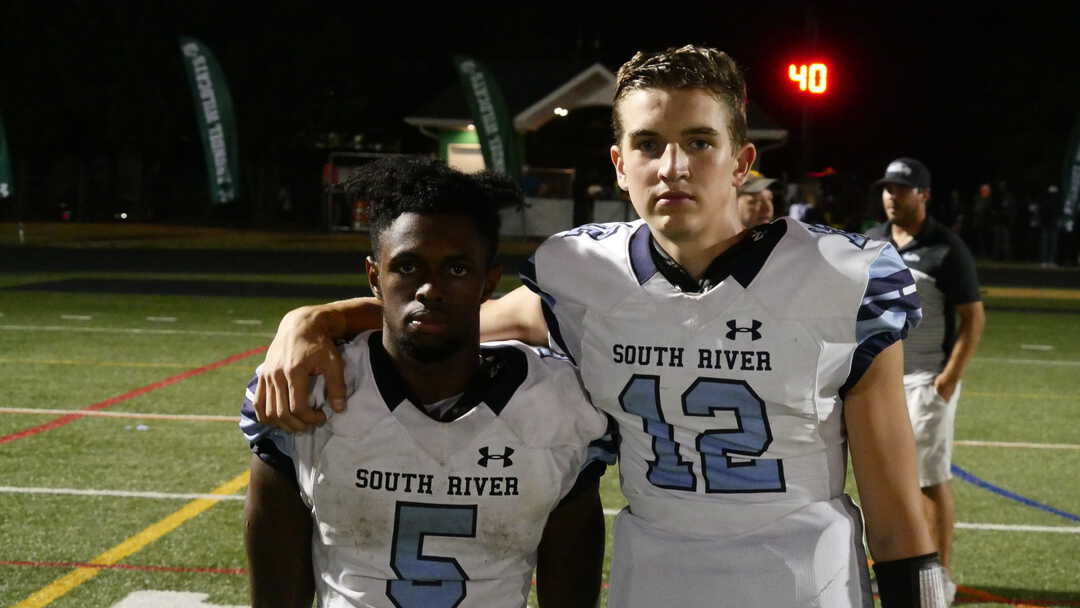 Delvin Johnson and David Foust helped South River ended nearly two decades of misery against Arundel. The No. 18 Seahawks defeated the No. 15 Wildcats for the first time since 2003 with a 30-22 win in Gambrills.

No. 18 South River High remains Anne Arundel County’s only unbeaten football team after taking a 30-22 decision in Gambrills over 15th-ranked Arundel Friday night, spoiling the latter’s Homecoming behind the running of junior Delvin Johnson and the quarterbacking of senior David Foust.

It was the Seahawks first win over Arundel since 2003 when they romped 42-17 in what was then their second win in three years over Arundel. The Edgewater school is 4-0 for the first time since 1984 when it advanced to its only state final under legendary coach Joe Papetti.

Papetti will be inducted posthumously into the 29th Anne Arundel County Sports Hall of Fame next month. The Seahawks reached the Class 4A East Region final (9th all-time playoff appearance) after stunning league champ Broadneck (28-21) in the semifinals.

“This is one of the toughest places to come play and get a win,” said Dolch, who has a steep background in winning football and top notch programs. “To come over here and gut it out kinda shows the growth of our program and the confidence the players can start having in themselves.”

Johnson ran for 196 yards and three first half touchdowns, on 30 attempts. Nearly 170 of his yards came in the first half as he was limited in the second half due to leg cramps.

Foust passed for 151 yards and directed what proved to be the game winning drive that came near the end of the third period as the Seahawks capitalized on gift field position. Foust also chipped in a game clinching quick-kick that pretty much killed Arundel’s chances in the waning seconds.

Arundel shockingly elected not to punt on 4th down and 10 at its own 30-yard line with 5:33 left in the third stanza and had an Austin Slye pass fall incomplete. The Seahawks took over and, in seven plays, made it a 30-16 game on Asa Evans’ 2-yard run with 1:57 until the final 12 minutes. The 14-point deficit proved too much for the Wildcats.

Dolch, whose uncle Dave coached at both the high school and college levels, was not surprised that Arundel’s second-year coach Jack Walsh went for it in that situation with an entire fourth period left.

“I think we’re built pretty similarly with our offensive approach and it almost kinda caught us down at the end toss,” said Dolch, who played Dom Damico at McDonogh School before going on to McDaniel College.” Both teams are aggressive and believe in their offense. And if they have a chance to put somebody away or make a big play, they’re going to take it. We did the same thing and came up short.

We have the same philosophy to be on attack and aggressive and believe in our guys. Sometime you don’t come up with the big play.”

South River didn’t get the first down and Slye, who threw for 329 yards and 3 TDs on the night, took the Cats 30 yards in six plays and capped it off with an 8-yard scoring pass to Bobby Taylor with 2:34 left in regulation. The conversion kick failed and it was 30-22 as the clock and South River had Arundel’s fate in their hands.

Slye had previously thrown scoring passes of 46 yards to Marcus Cager and 16 yards to Shaun-Trent Okoyo in the second period.

After short on-sides kick ended up in the hands of South River, Foust ran down the clock and on fourth-and 7 from the Seahawk 49.

Foust set up what looked to be a go-for-the-1st down, but surprised everybody with a last-second quick punt that rolled to the Arundel 7 with 11.3 seconds left.

The Wildcats got off only one play that amounted to zilch and South River was in the win column.

“That’s a fun play and we got it off,” said a smiling Foust, who had thrown 5 touchdown passes in a 62-22 rout of  Annapolis the week before and who boasts a 4.79 GPA with honors courses and has drawn attention from a few Ivy League schools, Army and Navy.

“We went out after last season and we all grinded every single day, just trying to get better. Yeah, 4-0 feels great, knocking off some big teams along the way (Westminster and Meade along the way. This is exactly where you want to be. You know you start off 2-2 or 3-1 you’re still happy, but 4-0 feels amazing.”

Foust, who’s also president of his class Student Government Association, had high praise for scatback Johnson, who can swivel in motion and fly.

“On nights like this when you can depend on him is awesome,” added Foust. “If I do not have my best game, we’ve got Delvin to rely on. We’re not pass only, we’re just a complete offense.”

Even though there were no aerial TD, the Foust to Sean Leonard connection produced 87 yards through the air which contributed to the offense in terms of first downs (23) and keeping possession on 68 plays.

Foust reminds a lot of old timers of QB Ray Kingsfield who led the Seahawks to the state Class A final in 1984 and to postseason play again in 1985 and was named Anne Arundel League ABC Player of the Year.

“We’re like brothers, and I have known most of them since I was like 10-years old,” Johnson said “David Foust and I played youth league together at South River Youth Association and we played there all the way up to high school.”