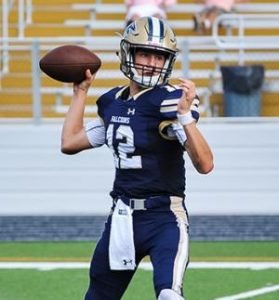 Jordan Hallet had a huge game for Severna Park Friday night. The senior quarterback threw four touchdown passes as the Falcons ended an 11-game losing streak to Old Mill with a 28-21 decision in an Anne Arundel County contest in Millersville.

After back-to-back losses at its new field, Severna Park High was a prohibitive underdog at Old Mill Friday evening.

The Falcons last defeated the perennial Anne Arundel County stronghold in the 2008 4A East Region playoffs – the last time Severna Park made postseason play. Old Mill had not loss a regular season decision to the Falcons since 2006.

Edwards and Hallet connected on scoring plays of 80- and 30-yards in the final frame, wiping out a 21-14 deficit for the Falcons, whose last victory over Old Mill was a 28-21 decision in the 4A East semifinal. Severna Park lost to Arundel in the East final the following week.