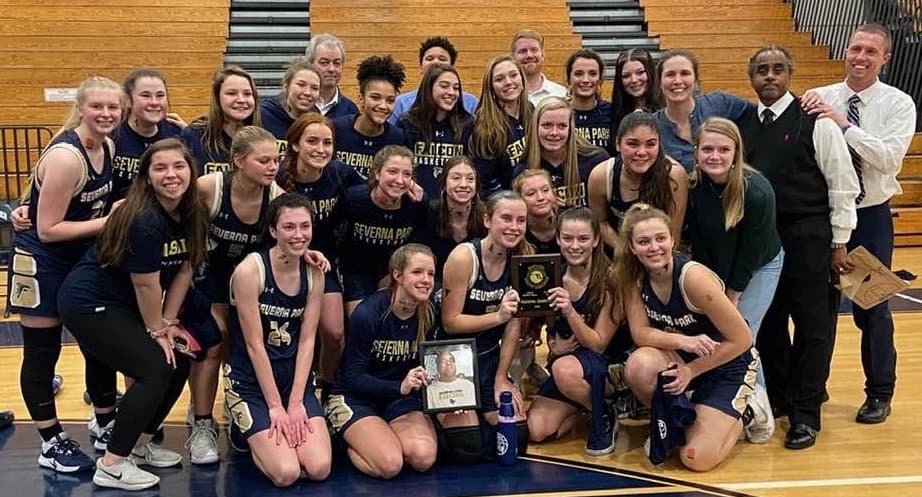 It should come as no surprise that Wednesday’s Class 4A East Region II final went down to the wire.

In a game that featured five ties and 13 lead changes, Severna Park’s Kaila Stasulli drove the length of the court and converted a driving layup with three seconds left in regulation, lifting the 15th-ranked Falcons to a 41-39 victory over the No. 12 Seahawks in Edgewater.

Severna Park (19-5 overall) won its third region title and first since 1988. The Falcons will play in a state quarterfinal Friday against an opponent to be determined.

“The girls made some adjustments and Kaila did a wonderful job running the offense,” Falcons’ coach Kristofer Dean said. “We have a designed play we run at the end of quarters that we’ve been working on, but generally she doesn’t get the shot. I’m proud of her.”

South River had one last chance, but its final shot was off the mark and the Falcons stormed the court to celebrate.

Stasulli finished with a team-high 12 points, including the team’s final 11. She scored at the end of the third quarter to tie the game, then scored all nine of the Falcons’ points in the final frame.

“I just tried to beat my first girl and look for what I had,” said Stasulli, on the go-ahead shot. “I thought I was in position to take the shot.”

Lena McLaughlin and Hailey Betch each scored eight points for the Falcons, who found some success down low through the first three quarters. Cam Chew followed with five points and Jess Albert and Theresa Bragg each added four.

Severna Park, which has five losses in games that counted toward the region standings, will likely have to go on the road on Friday. The eight region champions will be reseeded based on record.

“We have a lot of film on a lot of different teams right now,” Dean said. “We’ll figure it out and these girls will be ready.”

Ashlynn Burrows scored 24 points to lead South River, but the rest of the team combined for just four field goals and 15 points.

“This is probably the largest group of seniors I’ve ever had,” South River coach Mike Zivic said. “It’s tough. We’re losing a large portion of our team. They’re an absolutely amazing group and I can’t ask for a better group.”

When the teams met at South River on Jan. 17, South River ran out to a 15-point lead in the second quarter before the Falcons rallied for the 38-33 victory.

That victory in January gave the Falcons the much-needed confidence they needed to pull off the win on Wednesday.

“That was huge,” Dean said. “These girls couldn’t have been any more confident today.”