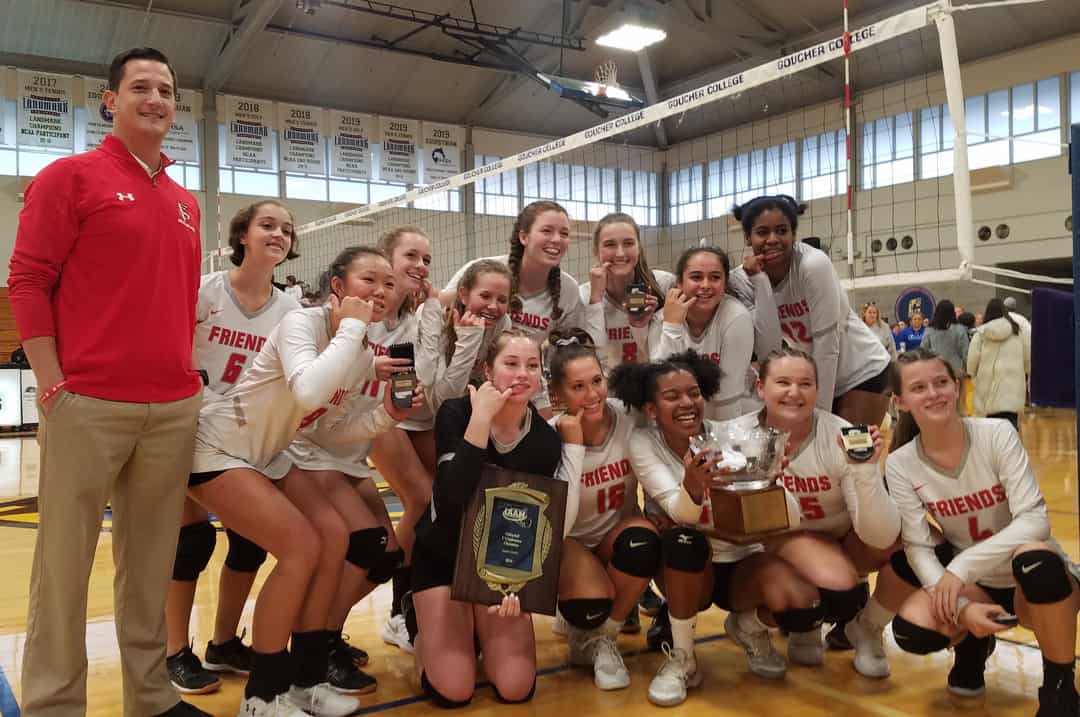 A year of wait ended gloriously for Friends School Saturday.

“A lot of credit to St. Tim’s, they are really strong team,” Friends coach David Thorne said. “This is a really good win, we had to preserve all year long. We have a great group of girls here.”

After being swept by Indian Creek School in the 2018 league final, Friends (12-2 overall) hoisted the league championship glass bowl for the first time since 2010.

“After losing in the finals last year, I knew that I really wanted to get back and to prove that we could win it all,” Shmerler said.

“This is so crazy, we worked so hard to get here and be champions now is amazing,” Adams said.

Shmerler got the Quakers off to a 6-2 lead with four aces and Jada Mandala added a kill during the spurt. St. Tim’s was able to force a 23-23 tie with attack errors from the Quakers and a Morgan Gurley kill. Another St. Tim’s attack error and Mandala’s kill clinched the opening set.

“They [St. Tim’s] hit really hard, they got every pass up and trying to get the ball past them was so frustrating,” Adams said.

St. Timothy’s carried the momentum into the 3rd set, building an 8-2 with Crewe blasting six kills and Melissa Kocak adding an ace, but Friends responded. The Charles Street school answered with a 9-2 run, and built a sizable margin to coast.

“This was a team win, it was a team effort tonight and it wasn’t just one person who helped us win,” Thorne said.

The 4th set was tightly contested with four lead changes throughout, St. Timothy’s tied the set at 23 with a kill from Crewe knotting the game at 23-23, but an attack error gave the Quakers the lead.

Shmerler set up Gilmore with a pass, and Gilmore immediately fired the ball down for the championship-clinching kill. The Quakers end the season with 10 straight wins.

St. Timothy’s, which defeated top Beth Tfiloh in Thursday’s semifinals will have to wait one more year to win their first championship bowl since 2014.

“They have come such huge way since the start of the season,” St. Timothy’s coach Jessica Yager said. “They have really grown into their roles and it just amazing to get here and we will be back next year.”